Composer, guitarist and producer Rafiq Bhatia is a member of Son Lux. Rafiq released his own debut EP and LP in 2012, and contributed to Son Lux’s Lanterns (2013) and Alternate Worlds (2014) prior to joining the band this year. As of this writing, he’s touring with Son Lux and working on new Son Lux and Rafiq Bhatia albums. You can follow Rafiq on Twitter and Facebook, and Son Lux on Twitter and Facebook.  (Photo credit: Timothy Saccenti)

The cover of Young Thug’s Slime Season 2 features the rapper suspended from strings, face obscured by bleached dreads, head lowered in submission. He’s a puppet, vacated of his will, animated by the bejeweled hand of an unidentifiable mastermind. It’s an apt analogy, not least because Thugger’s spasmodic flow has an unmistakably marionette-like quality. Slime Season 2 is the sound of one of today’s most bewildering emcees reining in his runaway imagination in an acknowledgement of the rap game’s conventions. The result is his most accessible and commercially viable release to date. But in submitting, at least temporarily, to the expectations and limitations of his audience, Young Thug is leading us by the hand. He’s using a standard backdrop as a barometer, objectively proving his explosive potential. He’s letting us watch him build a spaceship — and he just might take us with him.

Much has been made of the freshness, outlandishness and comprehensibility (or lack thereof, depending on whom you ask) of Young Thug’s sprawling oeuvre, which includes more than one hundred tracks from the past year alone. Love him or hate him, it’s hard to deny that he is willing and able to stretch; his range — of timbres, techniques, bizarre metaphors — is unparalleled. But when he does stretch, he pulls harder than almost any other emcee, tearing the words altogether, phrases veering off into obscurity mid-bar. Whether it’s genius or lunacy, he’s clearly one of the few willing to go there. Personally, I’m inclined to side with an argument posed by Chris Richards of the Washington Post: “If rap music is an attempt to make sense of this world out of rhythm and rhyme, then the music of Young Thug is the sound of that world being dismantled…the post-verbal eruption that best reflects the incomprehensibility of the right now, an inside-out soliloquy for our scrambled American mood.” Of course, as Richards points out, you need only visit Genius.com to find dozens of naysayers. Usually members of the “real hip-hop” orthodoxy, they read Thugger’s inscrutability as blatant incoherence, not beguiling inventiveness. Truthfully, that perspective is hard to entirely refute, but the controversy has only heightened the mystique surrounding hip-hop’s most outré new personality. Whether you’re betting that he’ll be embraced as a sage or outed as a sham, we’re on the edge of our seats to see whether or not Young Thug will rise to the occasion.

Slime Season 2 is the clearest indication of Thug’s merits, contextualizing his oddball stylings within a series of very standard, yet well-chosen, beats curated by his engineer Alex Tumay. Whether you hear the record as cohesive or overly uniform, the production is subtle, consistent and rarely deviates from conventional trap phraseology. This prosaic quality is very intentional — and very effective. It provides the most durable surface to date for Thugger’s volatile, charged vocals to bounce off of, crash into and, occasionally, break through. These beats serve to counterpoise his eccentricity, supplying an unambiguous setting in which we can both appreciate and scrutinize his outpourings. The gritty, saturated square-wave funk of early banger “Don’t Know” sets the perfect stage for Thug’s contortionist flow, a slide to keep his somersaults on course. Tracks such as “Thief in the Night” and “Go Crazy” are grounded by archetypal, pared-down piano trap. These are understated by design, allowing us to appreciate the precision with which Thugger frays and folds his flow in and out of intelligibility.

There’s a lot to counterbalance, because there’s very little that’s ordinary about Young Thug. His delivery is as zany and cartoonish as ever on this record, as on “Hey, I,” in which his abraded, Auto-Tune-drenched voice cries out, “I’m a fuckin’ lion like Simba.” There’s a drowsy yet capricious quality to the vocals, turning on a dime between lean and caffeine. Cryptic divinations ooze forth one second, and half-eaten braggadocio stammers out the next. But Thug knows how to use extremes effectively; all the amusement and idiosyncrasy is deceptive, leaving the listener flatly unprepared for the impact of his occasional moments of clarity. “A wise man told me nothing,” from the start of the second verse of “Raw,” is more lucid than hindsight.

And then there’s his use of repetition, which is more baffling than clarifying. Hearing him utter the first phrase on “Big Racks” — “I got some big racks right on me,” stated with minor variations at least eight times — reminded me of falling in love with gangster rap in the third grade, before I had any idea what Biggie and Busta were actually saying. (As ridiculous as it seemed that Young Thug might be bragging about keeping a pack of “Big Red” on his person at all times, it never felt out of the question.) For me, experiencing his flow is more about the sound and the feeling; as in classical minimalism, all the reiteration lets you focus on the nuances in the articulation or zoom out and blanket yourself in the big picture. But the ambiguity also piques curiosity, and in the wake of the death of our collective attention span, anything that stays on the mind is more likely to survive. Indeed, it’s sometimes an open question as to whether or not he’s actually saying anything at all. But juxtaposing all of this against the stability of the production produces a flattering result; it’s the best indication yet that Young Thug is drunken boxing, not just drunk.

This release is more of a mixtape or a collection than it is an album, but the evenness of the production makes it feel never-ending by the standards of any format. It’s also almost ninety minutes long, making it even more difficult to tend to every detail actively throughout. But, again, the reality is that hardly anyone listens to records that way these days, anyway, and that is certainly not the intention here. This is music to get lost in or to live a small chapter of your life to. In that respect, Slime Season 2 feels, quite literally, like a season.

While this music is imbued with its fair share of ambiguities and open questions — indeed, it may just contain the largest number of inscrutable phrases of any album this year — I keep coming back to its enigmatic cover image. Who is the puppet master? Is it the industry, forcing Young Thug into a more palatable direction? Perhaps it’s just another riddle with no answer, drawing us into speculation and letting us ascribe our own meaning to it. Or is Thugger himself the one pulling the strings? I suspect he might be — that he knows that he needs to move one step at a time in order to bring us along.

Composer, guitarist and producer Rafiq Bhatia is a member of Son Lux. Rafiq released his own debut EP and LP in 2012, and contributed to Son Lux’s Lanterns (2013) and Alternate Worlds (2014) prior to joining the band this year. As of this writing, he’s touring with Son Lux and working on new Son Lux and Rafiq Bhatia albums. You can follow Rafiq on Twitter and Facebook, and Son Lux on Twitter and Facebook.  (Photo credit: Timothy Saccenti) 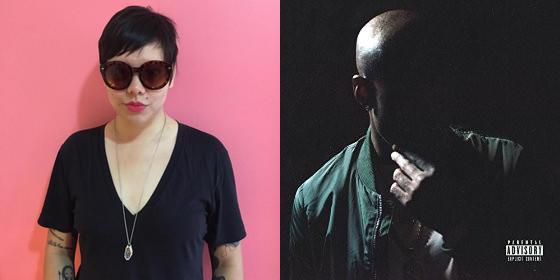