Claire Beaudreault a.k.a. Clara Bizna$$, is a rapper (from the group Hand Job Academy), writer, nail artist and multi-hyphenate living on the Brooklyn/Queens border. New Orleans-born, Los Angeles-, Manila- and West Virginia-bred, she moved to NYC a decade ago with two suitcases and $1,000. Bylines include BarkPost, Bust, Salon, Brokelyn and xoJane. She has got a Chihuahua, a Captain Beefheart tattoo and once played a hooker on SVU. Her religion is karaoke. Follow her on Twitter and Instagram. (photo credit: Hayleigh Hatcher)

On “Narcos,” Freddie Gibbs gives it to us straight, almost right out of the gate: the dope game is hard. The rap game on the other hand? It’s “easier’n a motherfucker.” But Shadow of a Doubt is about more than just selling drugs and slinging verses. It’s about the things people must often sacrifice in order to give their families a better life.

Although I admittedly exist outside of Gibbs’ world — the extent of my dealing has been selling my Adderall — we do have a few things in common (aside from both being rappers): one being an affinity for the hip-hop hero whose face adorns many an embroidered jacket and name many a rap album, Tony Montana. Gibbs peppers his verses on this album with references to the drug kingpin (see “Packages,” “Lately,” etc.) — played by Al Pacino in 1983’s Scarface – and I, the first-generation child of an immigrant, am also entranced by the idea of getting by with just my (metaphoric) balls and my word, as Pacino’s character puts it, living the lifestyle of the independent businessperson. The idea that a hardscrabble, hard-ass, ambitious immigrant can make it to the top and get a bad bitch and a big crib full of marble statues resonates for many young people looking for a path to financial independence and respect. The world is yours, mang.

Of course the dope game is a nasty thing — people die, either from violence or addiction — but there’s something so damn glamorous about the myth. Gibbs — who grew up trapping and robbing in socioeconomically ravaged Gary, Indiana — exposes that myth, however. The drug kingpin trope is embedded as deeply in the rap canon as cocaine residue in the ridges of an addict’s key, but Doubt delivers a nuanced perspective, neither glorifying nor entirely condemning.

The record opens with “Rearview,” boasting psychedelic, ambient tones and a recording of the security announcement in the LAX airport. We’re going on a journey. Strap in. Gibbs goes in from the jump with a hook calling out the haters and the bitches: “I bet you got it twisted, you don’t know who to trust.” Then, he seamlessly spins a reference to bars (of Xanax) into a line about being locked up: “I remember when the broads used to put me out/Cars I was sleepin’ out/Pill-happy, heavy, hella bars I can’t even count/L.A. County Jail ain’t got my moms here to bail me out.” The track manages to tell a lot of story even though it’s mostly hook. Gibbs is damn good at hooks, as the whole record proves. Each chorus stands alone.

“Fuckin’ up the Count” opens with a sample from the HBO show The Wire about the importance of drug-dealing math, and then Gibbs borrows a Gucci Mane/OJ da Juiceman line, “Quarter brick, half a brick, whole brick, ay!” (from 2008’s “Make the Trap Say Aye”), to kick off this song about the importance of never coming up short when your profit’s at stake. This track leads into “Extradite,” which features Black Thought of the Roots’ solid, politically tinged verse: “We cheat death, with each breath, the only one who make/it last forever is Keith Sweat.” This track will sure to be the favorite of fans of old-school conscious rap.

As a feminist and a female rapper, I’m always looking for that womanly presence; it’s my personal Bechdel test of hip-hop. Rapsody on Kendrick Lamar’s To Pimp a Butterfly (2015), Rah Digga on a Busta Rhymes track or Lauryn Hill on one of Nas’s — shit, even Amil Whitehead on Jay Z’s 1998 track “Can I Get A…” — when a male rapper features a lady on his album, he gains more of my respect. Just as I’m wondering if Gibbs will feature some feminine power, Dana Williams comes through, capably singing the hook on “McDuck.” (Are we talking about Scrooge? Get that money.)

Despite Williams’ presence, it seems like Gibbs’ record fits right into a world in which women are a commodity to be bent over, pimped or displayed on the pole. (On “Rearview,” for example, he raps, “I bought a ounce of cocaine ‘fore I bent her over.”) In “Packages” — which delivers some nice piano samples, and Freddie’s ode to the brick — he can’t even think about loving a person. He’s addicted to the hustle, the business and the money.

Gibbs breaks out of that self-centered, misogynistic world, though, on the second half of the album — he name-checks his mother and his daughter, as well as a woman or two he might almost see himself making the ball and chain he swaps the brick for. On “10 Times” we get a little sex, a little romance, a solid Gucci verse — plus an E-40 verse that leaves me wanting more. On “Basketball Wives” he reveals his romantic side, a tribute to a woman he could potentially love. Even with bitches on his lap and hoes who don’t know his struggle and pain, he’d rather be with this woman.

“Forever and a Day” gets to the real gnarly shit: the regrets of the dope boy. Gibbs confesses that he “did a lot of bad things to get change” and that he took it to levels that a lot of his peers wouldn’t. He shares that he can’t look his own mama in the eye. Jay Z might throw around a cursory “Yeah, that sucks, sorry I sold crack to your auntie and ruined her life” half-apology (as he did in his 2010 book, Decoded), but Gibbs sounds realer. He’s been hell-bent on making it, even if it takes “forever and a day,” and he will see you on the way down.

Gibbs reveals his insecurities on the thirteenth track — aptly titled “Insecurities.” He’s insecure about his looks, his jewels, his women — and it’s time to let those insecurities go. Over slowed-down, almost dreamy instrumentation, Gibbs muses: “Robbing stores for diamonds, jewels/I thought I needed attention/…Why am I starving for attention?”

“Freddie Gordy” stresses that he came from nothing. We hear about his addictions: weed, pills, sizzurp. He’s not breaking Crack Commandment #4 and getting high on his own supply, but he is getting high. A lot. Freddie wars with himself. How can he reconcile gang signs and handshakes with the life he wants for his daughter, Irie Jane? The track rides out with a nasty pitched-down hook that sounds like the sizzurp just kicked in.

In the last track, “Cold Ass N-gga” we get an EDM outro, replete with handclaps and Auto-Tune. It’s the final scene (unless you count the bonus tracks) of the movie. Gibbs doesn’t go down like Tony Montana, but he won’t hesitate to pop a clip off and reload: “Murder, murder on my mind/That’s how I’m programmed.” I don’t know how to listen to bonus tracks. Is this the real end? The iciness of “10 Chickens” closes out the album the way it started: with bitches, bricks and the rap game.

Shadow of a Doubt flows beautifully and cohesively. I’m along for this ride. I’ll apply Freddie’s principles to my future business endeavors, and I’ll heed his warnings: to get to the top, to feed your family and escape your circumstance, sacrifices must be made. Gibbs’s record is about his experience, his life, his choices — and it’s compelling, to say the least.

Claire Beaudreault a.k.a. Clara Bizna$$, is a rapper (from the group Hand Job Academy), writer, nail artist and multi-hyphenate living on the Brooklyn/Queens border. New Orleans-born, Los Angeles-, Manila- and West Virginia-bred, she moved to NYC a decade ago with two suitcases and $1,000. Bylines include BarkPost, Bust, Salon, Brokelyn and xoJane. She has got a Chihuahua, a Captain Beefheart tattoo and once played a hooker on SVU. Her religion is karaoke. Follow her on Twitter and Instagram. (photo credit: Hayleigh Hatcher) 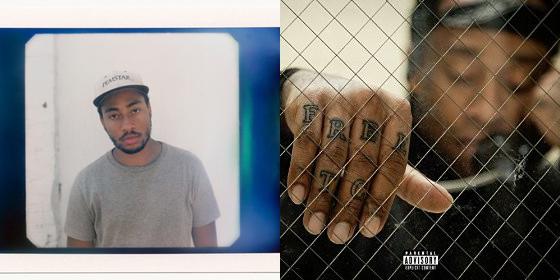