Back in the early seventies when I was the artistic director of Chicago’s Organic Theater Company, I was being harassed by a young local playwright who seemed to have written a new script every other day. “Read this one, it’s going to win the Pulitzer Prize!” this brash kid with the huge cigar would tell me. His name was David Mamet. I would laugh, not realizing that in a few years he actually would win the Pulitzer Prize. But he wouldn’t win it with these plays.

The first one he showed me was called Lakeboat and was based on his own experiences working on a cargo ship on the Great Lakes during a summer vacation from his classes at Goddard College. It was filled with colorful characters and wonderful dialogue, but had absolutely no story. “That’s what Mike Nichols told me,” Mamet replied, when I expressed my criticisms, “He said, ‘Great characters, now write them a play.’”

And that was the problem with David’s writing in those days. No story. My friend Lenny Kleinfeld, the co-author of Warp, our successful science-fiction trilogy, described early Mamet this way: “Act One, he wakes up. Act Two, he puts on his socks.”

But the dialogue was divine. Mamet’s characters talked like real people because David would sit in a booth at his favorite coffee shop (Jeff’s Laugh Inn in the Lincoln Hotel, where he lived) and listen in on conversations going on at the nearby tables while he secretly took notes. Sometimes he would read us exchanges he had overheard. One of my favorites was, “That pisses me off. That pisses the fuck off outta me.” Mamet is now famous for the brilliant ways he uses profanity in his scripts, but I can tell you that most of it was due to his great ear and how he could capture the way Chicagoans talked and continue to talk today. Every other word is “fuck.”

David had written a script with a title that could sell a shitload of tickets: Sexual Perversity in Chicago. The play was a series of two-character scenes in which everybody talked about nothing but sex. Two waitresses, two cops, two investment bankers, and so on. It had hilarious dialogue but, guess what, no story.

It’s hard to believe that this was the case. Now Mamet seems to be all about story, with the intricate convoluted plots in his films, but I’m here to tell you this was not so back in 1974. I kept looking at his many scripts and one day while reading something called Danny Shapiro and His Search for the Mystery Princess, there it was, an actual plot.

The story was about a love affair in which a young couple meet, fall in love and ultimately break up; the oldest story in the world, boy meets girl, boy gets girl, boy loses girl…but this one ended tragically without the two lovers getting back together. Suddenly, it hit me. You could call this play Sexual Perversity in Chicago, the perversity being the failure of these two characters to become a lasting couple and live happily ever after. And you could give each of them a jealous best friend, urging the two lovers to break up. They could speak the bitingly funny dialogue from Mamet’s original Sexual Perversity.

David, sensing the possibility of an actual professional production of his work, did a quick (and brilliant) rewrite and we were off to the races.

During rehearsals, David continued to revise the script, bringing in sheaves of new pages he had pounded out the night before on his old Underwood typewriter. (He still uses it to this day, refusing to touch a word processor or computer of any kind.) At one point my wife Carolyn, who played the female lead, was frustrated that her lines kept changing. She dramatically held up one of the pages and asked Mamet, “David, what is this?!”

Without hesitation, he replied, “It’s good writing.” (No false modesty ever with David Mamet.) But he also said the greatest thing I’ve ever heard a playwright say to an actor. “These are just the words,” David told her. “You can do whatever you want, as long as you say them.” And it’s true that with Mamet (and real life in general), the scene is often not about what’s being said.

As much of the play is set in singles’ bars, I took Mamet and the entire cast on a research trip to Mother’s, a popular Rush Street hangout. It was a bit dispiriting as we guys found that the women there would have nothing to do with us, while Carolyn and Roberta Custer, who brilliantly played the jaded best friend, were the belles of the ball, unable to drink all the free cocktails sent their way by the admiring throng. David spent much of the evening writing down things he was overhearing, which included a guy claiming to be the pilot of a “Jumbo jet” in order to impress a woman he was trying to pick up. The line ended up in the play, of course.

Sexual Perversity in Chicago was moderately successful, receiving mixed reviews, although Chicago Daily News critic Richard Christiansen recognized that we were witnessing the emergence of an amazingly gifted new American playwright. The play ran through the summer and David asked me if I would consider making him our playwright-in-residence. I was taken aback. “You mean we would only produce your plays?” I asked him. He nodded.

“Let me think about it,” I replied, not knowing what to say. At the time, I couldn’t imagine doing only David Mamet plays and now I kick myself that I ended up turning him down. I told him I’d like to continue working with him and maybe do one of his shows each season, but I could see the disappointment on his face. Plays were pouring out of Mamet in those days like water from a fountain and as much as I loved his writing I wanted to be free to do other things.

My Adventures with Jeffrey Katzenberg on Honey, I Shrunk the Kids 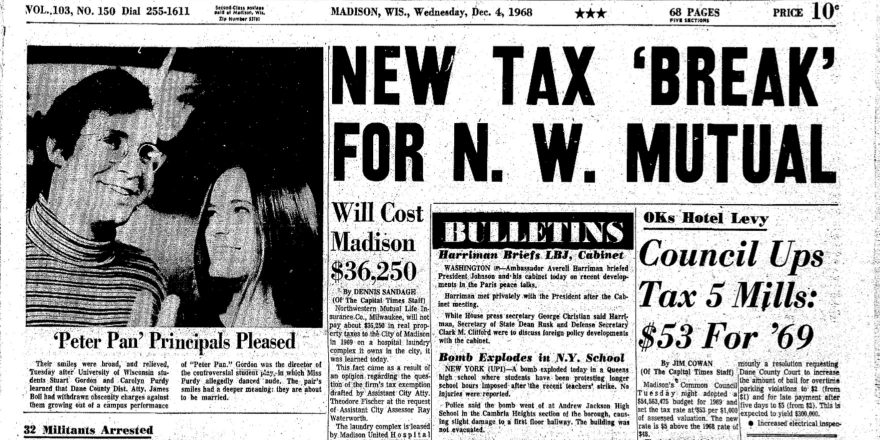