Sacha Gervasi is a screenwriter and director. His latest film, My Dinner with Hervé, starring Peter Dinklage and Jamie Dornan, premieres on HBO on October 20. He made his directing debut in 2009 with the hit documentary Anvil! The Story of Anvil, and has since directed the fiction features Hitchcock (2012), starring Anthony Hopkins, Helen Mirren and Scarlett Johansson, and November Criminals (2017), with Chloë Grace Moretz and Ansel Elgort. His screenwriting credits include the 1999 comedy The Big Tease, starring Craig Ferguson; The Terminal (2004), starring Tom Hanks and Catherine Zeta Jones and directed by Steven Spielberg; and Henry’s Crime (2010), starring Keanu Reeves, James Caan and Vera Farmiga. (Picture by Peter Iovino, courtesy of HBO.)

I met the Canadian heavy metal band Anvil in September 1982 at the Marquee Club in London. They’d never been to London before, so the next day I gave them a tour of the city and took them to the Houses of Parliament and Tate Galleries. We became really good friends. They were so grateful that they invited me to come out on tour with them the following summer as a drum roadie. We played a series of Canadian hockey arenas and the whole experience was surreal to be out on the road with my favorite band of all time. It was truly amazing – one of the greatest experiences of my life.

But after that summer, I lost touch with the band. It wasn’t until 20 years later that I wondered, “Whatever happened to my favorite band, Anvil?” When I discovered that they were still going, I managed to get in contact with the band’s lead singer, Lips, and flew him out for a weekend in Los Angeles. When he appeared at the airport, he was wearing the same Scorpions T-shirt he’d had on the last time I’d seen him, two decades before. Despite the fact that he was now delivering cafeteria meals to kindergartens in the dead of winter, he still had this extraordinary spirit and diehard belief that Anvil was still on the cusp of making it.

By the end of our weekend in L.A., I thought, “Maybe there’s a film here … about not giving up on your dream, even when everyone tells you to … about what happens when the magical thinking of childhood continues into adulthood and you just refuse to accept the facts.” If Lips hadn’t still believed in his dream, there wouldn’t have been a movie to make. And somewhat ironically, my documentary Anvil! The Story of Anvil launched an incredible wave of success for the band that continues to this day, nearly 10 years later.

The connection between Anvil! and my new film, My Dinner with Hervé – based on another real experience of mine 25 years ago interviewing Hervé Villechaize (Tattoo on Fantasy Island) – is that they are the most personal projects I’ve done. That’s not to say I didn’t love working with Steven Spielberg and Tom Hanks on The Terminal or directing Anthony Hopkins and Helen Mirren on Hitchcock – those were extraordinary experiences and I cherish those films – but the movies where I have a really intimate relationship to the subject are the most special to me.

For the past 15 years, Peter Dinklage and I have been trying to make the Hervé film because I think we both needed to tell the story. It was a momentous struggle to get it made and a couple of years ago we even reached the conclusion that it would never happen. We had a tearful dinner in New York where we accepted our fate and kissed the film goodbye. After so long, it was time to move on with our lives. Eight months later, we got a call from HBO: “Hey, this Hervé script seems interesting. Maybe we should talk about making it.” It was a goddamn miracle!

Sometimes it’s only after you’ve told the story that you realize the reason why you needed to tell it. Often the central theme or idea is the thing that you yourself need to hear more than anyone else. When I did Anvil!, I’d had some success in Hollywood and was becoming part of the machine. But filmmaking for me was never about being a successful screenwriter working within the system regardless of whether or not the films got made. It was about making movies that I cared about, that I loved, and that I was proud of. Anvil! came from that place – it was a story that only I could tell. What I’ve discovered is that if you come from the heart and you love what you’re doing, you can’t fail.

My Dinner with Hervé is important to me because over the three days that we spent together, Hervé Villechaize poured his heart out and told me his tragic and painful and inspiring life story. By the end of our time together, I’d become his friend. I could never have predicted that. On the surface, we were so different, but in truth we had a lot in common. When I said goodbye to him at the Universal Sheraton, I had no idea he would be dead within a week. But I remember promising him that, one way or another, I would tell his story – and that’s where this film comes from.

There’s no other way I could’ve survived 25 years with this story if it wasn’t personal – if I hadn’t connected at a very profound level with Hervé … if I hadn’t felt his warmth, his tenderness and his pain to the degree that I did. He was drinking and taking pills, and I was on the cusp myself. As human beings, we all have struggles, hopes, dreams, failures. My experience with Hervé made me realize how important it is not to rush to judgment. Everyone deserves to be given a chance, even if mainstream society deems that person to be some kind of “freak.” If you take the time to listen, everyone has something to offer, some experience that might help you in unexpected ways.

As a filmmaker, I think all you’re doing is trying to make sense of your own life. But within that, I’m also trying to find the connection between you and I, to identify that commonality. I hope my work reminds people that we’re all human, that we’re all struggling with whatever wounds we came in with or picked up along the way. I hope that if something is authentic and human and real, that people will somehow be able to see past their differences and connect with each other.

Sacha Gervasi is a screenwriter and director. His latest film, My Dinner with Hervé, starring Peter Dinklage and Jamie Dornan, premieres on HBO on October 20. He made his directing debut in 2009 with the hit documentary Anvil! The Story of Anvil, and has since directed the fiction features Hitchcock (2012), starring Anthony Hopkins, Helen Mirren and Scarlett Johansson, and November Criminals (2017), with Chloë Grace Moretz and Ansel Elgort. His screenwriting credits include the 1999 comedy The Big Tease, starring Craig Ferguson; The Terminal (2004), starring Tom Hanks and Catherine Zeta Jones and directed by Steven Spielberg; and Henry’s Crime (2010), starring Keanu Reeves, James Caan and Vera Farmiga. (Picture by Peter Iovino, courtesy of HBO.) 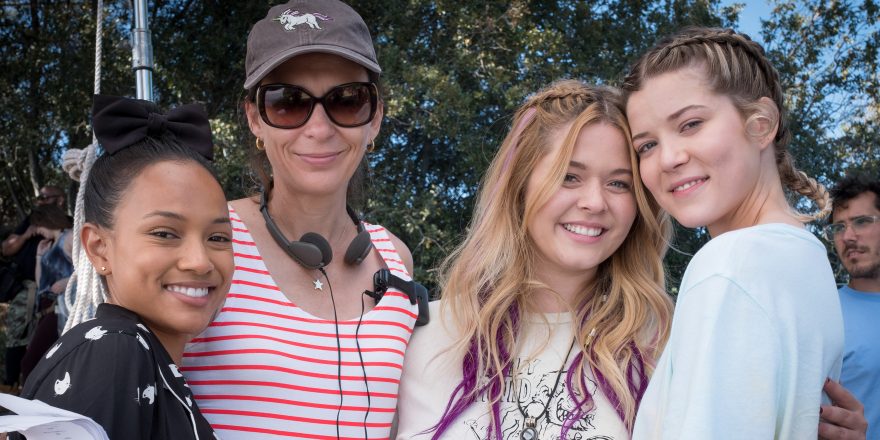