My new film, The Escape, is the story of Tara, played by Gemma Arterton, a wife and a mother with a successful husband (Dominic Cooper), a nice house, two cars, two children – but who feels suffocated by her “perfect” life. She needs and wants something else, and the film shows how she takes action and makes changes in her life that allow her to become something else.

The film was born out of a meeting that I had one day in London with Gemma. The meeting wasn’t about a film I had in mind, or an idea I’d thought of, or even a script I had written. The plan was just to have a chat and see what happened.

I didn’t know what to expect or what we would discuss. But what we talked about were films we liked – films such as the Dardenne brothers’ Two Days, One Night, Jacques Audiard’s Rust and Bone, Kelly Reichardt’s Wendy and Lucy. And we talked about the kind of films that we wanted to make – very authored, strong on realism, provocative, challenging.

It was a meeting of minds, and we knew then that we would definitely be making something together. We knew we wanted it to be uncompromising, difficult and uncomfortable. We also knew straight away that it should be from Gemma’s character’s perspective throughout – from a female point of view. That it would be made with intensity, and with a huge amount of trust on both sides. Those things we did know.

The next time we met, we talked through things a bit more specifically and discussed some themes that I knew would resonate with Gemma, that somehow expressed her natural characteristics and instincts. Themes of restlessness, of a need for fulfillment, of a need to escape things in general, of relationships, of marriage. I knew it would take bravery to confront these themes, but I also knew that Gemma would instinctively rise to that challenge.

Developing the film with Gemma was a joy, and I did it knowing that she was completely understanding of, and fully connected to, the character and story. This is an unusual and immensely immersive way of working, to make a film for, and with, an actor from the very start.

Taking this personal approach is for me what filmmaking is all about. Building trust and understanding with my collaborators. Working in a way that brings my own sense of truth and humanity to a project; my own sense of what life, of living, and of being, means. It’s why I make films, to shed some light on the difficulties and joys of being human. To do it in one’s own way is important because filmmaking is a creative art form that needs as many different voices as possible. It is a privilege to get the chance to make work in the way that one wants, and to make it without interference or prevention.

I integrate this personal way of working into every aspect of the filmmaking process.

I decided early on to set The Escape in Gemma’s hometown, Gravesend in Kent, and so many things we decided to include in the film were inspired by the landscape and world that she was from. I even set the conversation in the film between Tara and her mother (played by Frances Barber) in Gemma’s mother’s back garden!

We incorporated other elements of her life into the fabric of The Escape, like the fact that Gemma grew up very close to the Eurostar station. The fact that from an early age, she wanted to get away from where she grew up. The fact that she was never someone who was able to live the life that was expected of her in a town like Gravesend.

All these elements came to bear when I was writing the story.

When my producer Guy Heeley (who I previously worked with on two films and two TV series) came on board, the three of us set about making The Escape a reality.

As more people became involved, the process of making the film remained completely organic and instinctive. Actors were enrolled who we trusted and had worked with before, and they came to it because they wanted to collaborate in this distinctive, personal and intimate way, where everyone brings something of themselves to the film. Where they often have to face their own truths and realities, demons and fears.

The way we approached The Escape, fiction became mixed with reality. Actors and their characters were merged. When we were looking for the main location of the house that Gemma and Dominic Cooper live in, I wasn’t so much interested by the appearance of the house (which is completely normal when looking for locations), but I was more intrigued by the reality and authenticity of the lives of the people who actually lived in the house. For me, they had to match well the characters that both Gemma and Dominic were playing. I felt it had to be a completely authentic environment for them to inhabit.

The house we chose was so right, because there was a young family living there, and their reality overlapped with the reality of our story. It’s important for me to find locations that inform the actors because of the lives that already exist there. The realism of it really enhances the authenticity of their performances and of the film overall.

In the end, the children who play Gemma and Dominic’s children in the film were the very children who lived in that house. Gemma and Dominic became almost like their surrogate parents for the time we were shooting. The barbecue scene in the garden involved all the family’s real friends and neighbors. The school was the real school the children went to. Everything was kept authentic to that family and to the world they occupied.

I like to do this because it blends real life with drama. The actors become their character so much more than if one was making this without these elements. The actors then are the character instead of just playing the character. I like the difference that this kind of realism brings.

I like to do semi-improvisation on set, and therefore a lot of what happens with the scenes is organic. I often develop ideas with the actors that come from something that actually happens, or that comes from something we experience.

One example is the scene in The Escape where Tara and Mark take the children to the park to play. As scripted, this was a scene of a family having fun together, doing what families do. A moment of togetherness. But when we came to shoot it, the children played much more with Dominic, meaning Gemma’s character wasn’t nearly so involved.

This emotionally affected Gemma, who felt lonely and excluded. That, in turn, informed how the scene then played out. It became a scene about a mother who is isolated and dislocated and who then retreats into her own world and thoughts. It was a more affecting and poignant scene because of it. Instead of trying to keep things as they were on the page, I went with the real feelings and actions that emerged from these natural occurrences.

Whenever possible, I shoot in chronological order so that there is a proper journey that the actors are going on. Quite a big part of my creative process is trial and error. Some scenes work, others don’t – maybe because they don’t feel truthful, or just aren’t as interesting as I thought they were going to be – but it is very empowering and freeing for everyone involved to know that if something doesn’t work, we will always find another way to express that idea.

Always when I’m shooting, the questions I ask myself are: Did I feel that there were real emotions in that scene? Was there truth, and was it interesting? If the answers to these questions are all yes, then I’m happy. 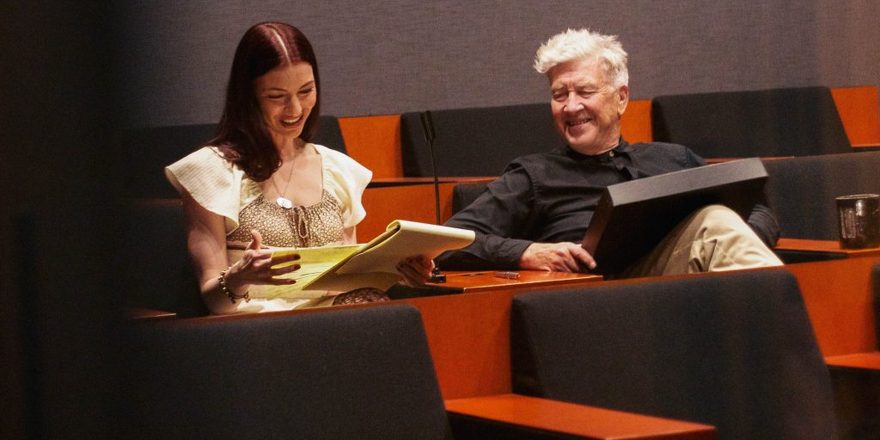