Michael Urie is the adorable star of Netflix’s new Christmas movie Single All the Way, and I am his boyfriend. For 13 Christmases, he and I have navigated where to spend the holidays. With his parents in Texas? With my family in Michigan? With his sister in California? Just us in New York, buzzed on mimosas before noon? LOL, no. That happened only once. Not because we’d planned it – no, no, no – rather the 2011 “Snowmaggeddon” planned it for us. Other than that, for 13 seasons, Michael and I have juggled which family to spend December 25th with.

Our first time tackling this was back in 2008. For those non-history buffs, 2008 was both the year of Obama’s landmark victory and the release of the movie Four Christmases, starring Reese Witherspoon and Vince Vaughn, an apropos film about an unmarried couple tasked with juggling multiple families during the holidays. Depending on your politics, the release of Four Christmases or Obama’s election mattered more.

When Michael and I began dating, it was mid-October, the 15th anniversary of the release of Henry Selick’s The Nightmare Before Christmas. We had the sweetest of meet-cutes. Gorgeous fall day, fluffy sweaters — the works. Serendipity’s Kate Beckinsale and John Cusack would’ve been jealous AF. Mutual friends of Michael and I had been trying to set us up for years. This time, we were ready. And we fell hard. It was grand. I was living in Astoria; Michael was subletting from Carol Kane (from numerous classics, including Scrooged). We were smitten. Gobsmacked. And in just two short months, we hoped to be spending our first Christmas together. Imagine that!

Love Actually teaches that you can’t possibly understand the true meaning of Christmas until you fall head over heels. Come to think of it, every Christmas movie teaches that. It’s a Wonderful Life, White Christmas, A Christmas Prince, Almost Christmas, The Best Man Holiday, the entire Hallmark universe. They all bank on characters locking lips before Santa plunges down the chimney.

But Michael and I had made our holiday plans before we met and those plans didn’t include each other. Our flights were arranged, our cars were rented. What were we supposed to do? Blow everything up?

In the 2020 holiday film Happiest Season, Harper (Mackenzie Davis) and her girlfriend Abby (Kristen Stewart) are in love. Harper invites Abby home for the holidays, promising Abby that her conservative parents know about their relationship. Abby agrees to go with Harper, but in the car ride, Harper is like, “LOL, psych. My parents think I’m straight. You have to say you’re my roommate.” Total nightmare. Literal horror show.

Happiest Season dramatized the fears I had about bringing Michael home that first year. So, I didn’t invite him to Michigan. And he didn’t invite me to California. We spent our first holiday apart.

Movies influence. They shape, they change, they teach. My mother recently spoke of a beautifully made program chronicling the life of Jesus called The Chosen. She was like, “Ryan, you have no idea how wonderful it is to finally see something you believe in so much, that matters so much to you, produced with such care and empathy and respect. This show has the power to change people.” She’s right. Representation matters. And, when handled with care, representation has the ability to educate.

When Kevin (Macaulay Culkin) was reunited with his mom (Catherine O’Hara) in Home Alone, we learned the value of family; in Elf, when Jovie (Zooey Deschanel) sang in the shower as Buddy (Will Ferrell) listened on, we experienced innocence in a new light; when Ebony Scrooge (Vanessa Williams) woke up after her ghostly visitations in A Diva’s Christmas Carol, we understood how to value others more than ourselves.

With the upcoming release of Single All the Way, starring three openly gay actors (Michael Urie, Luke Macfarlane, Philemon Chambers) playing characters who are genuine, joyful, funny and also gay, I think of how much good this movie will do for others. I imagine a young gay boy finding the film on Netflix, grabbing some popcorn, tuning in with his parents, perhaps between viewings of Polar Express and Miracle on 34th Street, and simply experiencing a positive gay storyline as part of the vast cannon of Christmas cinema.

Maybe then, this young boy who discovers Single All the Way will see himself represented and will one day be brave enough to ask his boyfriend, “Will you come meet my parents this Christmas?” 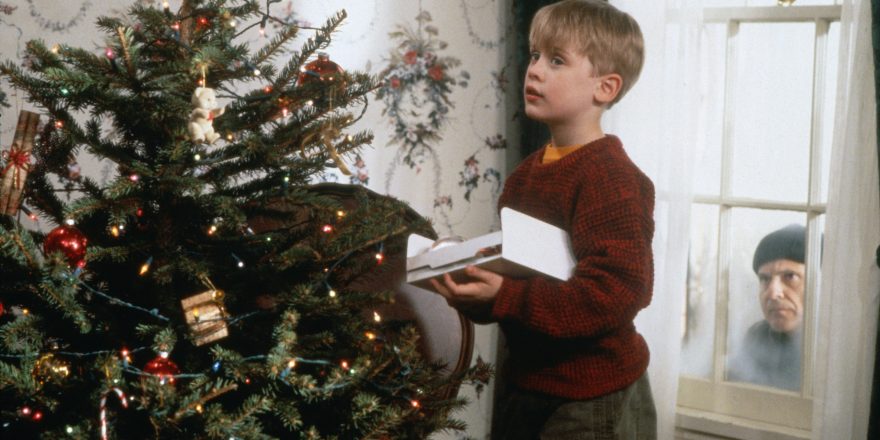 Eight Holiday Movies To Teach You About Christmas, If You’re A Jew Like Me