Franz Nicolay is a musician and writer whose 2016 book The Humorless Ladies of Border Control:Touring the Punk Underground from Belgrade to Ulanbaatar (The New Press) was named a “Best Travel Book” by the New York Times. He teaches at Bard College.

On election night, I went to bed at ten. I could see what was happening and I didn’t want to have to watch. The next morning, I deleted all my politics and current events podcasts, stopped reading news sites and physically walked away from any conversation about politics. I sailed through the stages of grieving directly to denial, and set up and sealed my tent. La-la-la, I’m not home. I didn’t want to hear the man’s name or see his face.

On Inauguration Day, on my wife’s salutary insistence, we traveled to the Washington, D.C. area for the next day’s march. My uncle-in-law was watching the ceremonies in the living room. I couldn’t stand the cheerful voices acting as if this were a ritual of the usual dignity and excitement. We brought sandwiches upstairs to the bedroom and, to my daughter’s delight, had a picnic on the floor.

The day was grey and rainy. The Romans, my wife said, would have postponed everything — bad auguries. I have to leave the house once today, I thought. I can’t just hide in this bedroom for four years.

I put on shorts and sneakers and went on a long run in the hilly suburbs where my mother-in-law lives. I’ll listen to this new Jens Lekman album, I thought. His music, for all its glum introspection, is light and escapist. It’ll be a distraction.

I like Jens Lekman’s music. “You are the Light”? Totally. “The Opposite of Hallelujah”? Fuck yes. “I Know What Love Isn’t”? Jaunty and clever. “The End of the World is Bigger than Love”? I ripped off the chorus. I’ve seen him twice, once at a festival, once at a small venue, and he brought the goods as a performer — deadpan and slyly self-conscious.

A mile or so later, a woman had pulled an old Obama/Biden lawn sign out of storage and set it at the end of her driveway.

Out on my run, I saw that on a single lamppost, someone had gone to the trouble of printing out and Scotch-taping a quote from Barack Obama: “Anyone who threatens our values, whether fascists or communists or jihadists or” — offset and in red — “homegrown demagogues” — “will always fail in the end.” A mile or so later, a woman had pulled an old Obama/Biden lawn sign out of storage and set it at the end of her driveway. She gave me a thumbs-up as I took a picture.

I’m a man in my late thirties, early middle age with a wife and two children, a mortgage and two cars. I work in the arts. Demographics would indicate, accurately, that I’m a centrist Democrat with residual radical sympathies. An educated person, I have an instinctual faith in institutions and a trust in human intelligence and decency. And so at every step of the previous year’s process, I expected, on some level, the checks built into the system to activate and thwart a comically unqualified cartoon villain, a moral monster with no demonstrable ethical sensibility. Or at least I assumed that the majority of people weren’t that fucking stupid.

My pulse was up. I ran harder, crossing a bridge and turning into a wooded park. In my headphones, over a light electro-pop arrangement, Jens politely interrogated a Mormon missionary about what it might be like to feel purposeful (“To Know Your Mission”). He took a gentle swipe at Chumbawamba by way of time-stamping the story to 1997.

When institutions fail, though — I thought as my sneaker scattered a puddle — whether through the cowardice of their guardians or the hollow impotence of their norms, reasonable people turn to unreasonable options. One of my takeaways from watching the Maidan revolution in Ukraine, which drove out their own corrupt Russian puppet, was that protest based on high-road shaming only works on governments that can be shamed.

You know what I really want to hear right now, now that you mention it? Some fucking Chumbawamba.

In the midst of the apotheosis of the revolutionary right, the endless foolish optimism or helpless despair on the left, the angry and heartsick moderate turns to radical thoughts. We support all forms of resistance, I thought, against this racist system. You know what I really want to hear right now, now that you mention it? Some fucking Chumbawamba. Not the punchlines, the righteous anarchists. Some vicious, black-and-white sloganeering. I’ll even take it with some gentle electro-pop arrangements.

“Can’t hear you ’cause your mouth’s full of shit. You think you’re God’s gift, you’re a liar. I wouldn’t piss on you, if you were on fire. Give the fascist man a gunshot. Tell them that the Nazis never really went away. Enough is enough.”

I pulled up “We Support All Forms of Resistance Against this Racist System” on YouTube. I made a fist and hissed along. Here we are, I thought, flinging a runnel of sweat from my forehead. This is the test for a multi-generational bubble that has remained isolated from consequence. I switched back to Jens.

Gently strummed major sevenths and synth claps framed empathetic portraits of gentle ectomorphs whose yearning emotional touchstone was a post-pubescent but pre-sexual utopia, a glowing prelapsarian fantasy of permanently arrested development. In a Jens Lekman song, doing “something illegal” is an inconsequential opportunity for grand romantic gesture, to “just live a little,” like sneaking into a closed carnival and hotwiring a Ferris wheel (“Hotwire the Ferris Wheel”). In an older song, “You Are the Light” (which Lekman references on this album), the narrator is arrested, but uses his “one phone call to dedicate a song to you on the radio.” The cops, melancholy humans too, let him go.

God bless anyone, now, I thought, a burning in my knee spreading, whose interaction with authority is so casual and uncomplicated.

God bless anyone, now, I thought, a burning in my knee spreading, whose interaction with authority is so casual and uncomplicated. I paused Jens again and opened “Resist,” Tim Fite’s howling vituperation against police brutality. I will not stop; I will not freeze. I will not show you my hands and get down on my knees. I will not surrender, I will not submit, I will not comply, I will resist.

In his notes to the record, he refers to his age as a “transitional phase…without cool role models.” Thirty-five is an adult by any standard. Biologically speaking, a thirty-five-year-old could be a grandparent. It’s a rare and lucky thirtysomething who has the latitude to contemplate their adulthood from an ironic distance, and the prosperous and peaceful western world has accumulated a critical mass of them.

Lekman explains the album title: “[I]t’s about these people and it’s like they’re sitting in a waiting room waiting for life to start and then the nurse comes out and says, ‘Life will see you now.’” For thousands of those people, I thought, climbing a hill past a just-completed nouveau-riche mansion, this inflection point had arrived. If the definitive Jens Lekman lyric is “I don’t know,” the times, I thought, accelerating downhill past a closed school, our grim new times demanded choices and definitive stands. Ambivalence was a luxury we could no longer afford. Life will see us now.

Songs — ‘cultural product’ of any kind — that you write in one context feel unpredictably different when they’re consumed, years later.

By his own account, Jens has been working on this collection of songs for almost five years. I know how this feels. Songs — “cultural product” of any kind — that you write in one context feel unpredictably different when they’re consumed, years later. There’s no way to control when and how your “content” is “consumed.” And the music/publicity complex of today gives each chunk of work the half-life of a housefly: if your album hasn’t reached a self-sustaining momentum of attention in a week or two, forget about it. It’s over, cast into the whirlpool of discarded media.

Fortunately, the thing about records, like books, despite their digital immateriality, is that they’ll still be there when you need them. If, right now, I need the savage anti-patriotic rants of Thomas Bernhard, that doesn’t preclude Alice Munro later. If, right now, the righteous anger of Tim Fite and old Chumbawamba channels my animal rush of testosterone, perhaps in two years, or four, or twenty, I’ll require this empathetic inquiry into masculinity, vulnerability and the pathos of human connection.

I coasted to a stuttering stop, alive with purpose, outside my mother-in-law’s house. I would donate. I would join. I would march. I would throw stones. I would curse, in the ancient sense of calling down vengeance. I would resist. In my headphones, Jens faced an unnamed fear in “Postcard #17” and concluded, “It’s fucking ridiculous.” That was a sentiment I could use.

Franz Nicolay is a musician and writer whose 2016 book The Humorless Ladies of Border Control:Touring the Punk Underground from Belgrade to Ulanbaatar (The New Press) was named a “Best Travel Book” by the New York Times. He teaches at Bard College.

Chumbawamba
indie pop
Jens Lenkman
music essay
punk
The Hold Steady
The World/Inferno Friendship Society
Tim Fite
Talkhouse Weekend Playlist: The Orwells Have the Cure for What Ails You
Video Essay: Richie Rich and the Search for Friends in Cinema 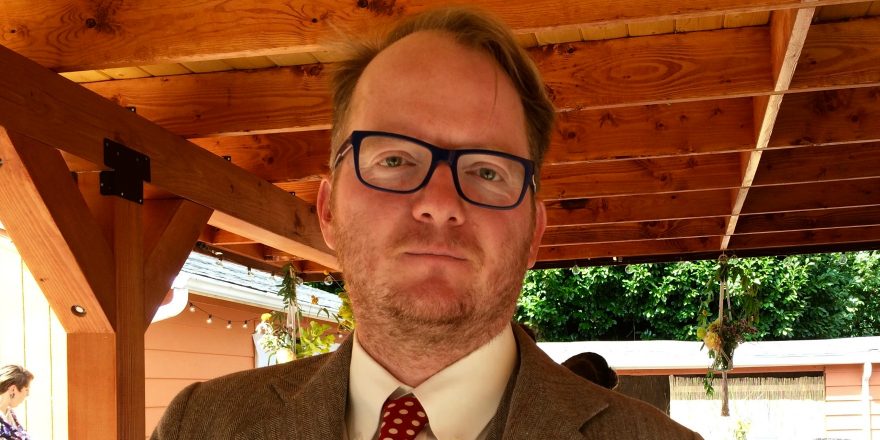 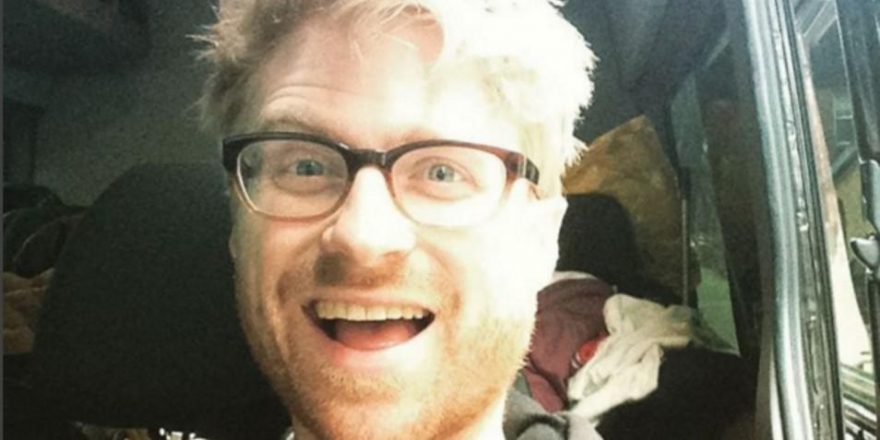