What began as an occasional recording project designed to allow Mark Palm to indulge his pop sensibility through a series of two-song singles, Seattle’s Supercrush developed into a fully functioning band with countless live shows and many tours under its belt. Although best known for playing in a long lineage of hardcore, punk, and metal groups, Palm began exploring softer sounds in the late aughts as one of the primary songwriters of San Francisco shoegazers Modern Charms before adopting the Supercrush moniker as a vehicle for his pursuit of powerpop pre-eminence.

In the neighborhood where I grew up in Vancouver, there was a train track that went right past the bottom of my street. It has since been decommissioned and turned into a walking path, but as a child the train would run past every evening. The tracks became a central part of my childhood. I walked along them to get to and from school every day for 13 years. I’d put coins on the tracks to flatten. My family picked blackberries there. I built forts in the bushes adjacent to the tracks to play in as a kid, and to drink and smoke weed in as a teenager. As a young punk rocker I spray painted “PUNX” on the fence next to the tracks, surely inspired by a Rancid video I’d seen on Much Music. For as long as I can remember, the trains themselves captivated my imagination and sense of adventure. As a kid I’d wonder, Where are they going?, and daydream about climbing on one of the cars and going for a ride to unknown places. Then as a teen I got exposed to the phenomenon of train hopper punks. I suppose some of my sensibilities were not exactly in line with the typical archetype of the train hopper punk, but I definitely shared the urge for freedom and adventure. I’ve always appreciated how the practice of riding trains is sort of a hidden world, and information pertaining to it tends to be rather tightly guarded and not freely shared publicly, so I won’t speak much more on it. But the point is, I love freight trains.

I recently had a funny experience while watching trains here in Seattle. It was the middle of the night and I was biking next to a series of tracks leading into BNSF’s Balmer Yard in Seattle’s Interbay neighborhood. I came upon a hippie who had accidentally backed his Volkswagen bus onto the train track and gotten stuck.  We tried everything we could to get the van free, but one of the rear wheels was stuck between the wooden railroad ties.  While we waited for a tow truck to arrive, multiple trains went by on adjacent tracks, mere feet from where his VW was stuck. It was just dumb luck that they were not traveling on the outermost track, as there is no chance that a train could stop in time to avoid completely demolishing the vehicle, which seemed to be full of all the poor hippie’s worldly possessions. I had to call BNSF’s emergency hotline to report the track obstruction to make sure that any future trains would be diverted until the track had been cleared. I gave an extremely detailed description using railroad jargon of exactly where the obstruction was and on which specific track it was on. The confused phone operator asked “Wait, do you work for BNSF?” Eventually the tow truck arrived to save the day and the overjoyed hippie hugged the tow truck driver.

Anyway, you get the point — trains are a great thing. I was pleased that in our new music video, we were able to catch some footage of the Union Pacific headed south out of the Argo Yard in Georgetown, just a short ways from where we recorded our SODO Pop album.

Anyone who has been around me for the past few months has had to endure me going on and on endlessly about my latest musical obsession, Enuff Z’Nuff. I think I had a vague awareness of this group’s existence in the past, but had never checked ‘em out — most likely turned off by the absurd band name — until recently. Wow, am I glad I finally gave them a chance.

I started at the beginning, with their 1989 debut album, and continued on from there into their massive catalog. It’s like music that has been engineered in a lab specifically to my tastes.  Hyper melodic power pop songcraft with a supercharged overdriven guitar tone, massive big budget production, slammin’ drums, and serious guitar solo firepower full of whammy bar acrobatics, pinch harmonics, and other tropes from the 1980s guitar hero school of shredding, courtesy of the late Derek Frigo. I’ve come to the belief that lead singer and primary songwriter Donnie Vie is one of the greatest to ever do it and as one explores further and further into Enuff Z’Nuff, and Vie’s own catalog, a Beatle-esque songwriting sophistication emerges as some of the hair metal cliches begin to fall to the wayside. Shamefully underappreciated, perhaps Vie’s talents were overshadowed by the outrageous hypercolor glam presentation of Enuff Z’Nuff’s early years, but even that I find fun and kinda charming — not entirely unlike the off-the-wall get-ups of Redd Kross’s Third Eye era, another favorite group of mine.

There’s been a few different periods in my life when I got into lifting weights and working out, but most recently — about five years ago — I got into the habit and have remained pretty consistent with it. It started under kind of strange circumstances, when I was living in my van in Oakland and would lift weights and do push-ups and crunches on the sidewalk in the middle of the night before turning in each day. Since moving to Seattle, and even when on tour, I’ve tried to keep up with it by going to YMCA gyms as much as possible, not that you can really tell by looking at me. Nonetheless, it has done wonders for my mental state and emotional well-being, despite the fact that I’m clearly not gonna be the next Arnold.

Of course, there’s nothing particularly unusual about being into working out; I know plenty of people who are into going to the gym, running, or physical fitness of one kind or another. But I’ve yet to meet anyone else who has taken an avid interest in the sport of professional bodybuilding. Even though I’m not an aspiring competitor myself, I have become a huge fan of the sport. It’s a fascinating sport on many levels, truly one of the most extreme things one could pursue. From the hyper aestheticism of Frank Zane, to the mass-monster ghoulishness (I say that respectfully) of Ronnie Coleman, to the groundbreaking musculature of Bev Francis, I have developed an appreciation for all of these physiques and many more. But even more so than that, I have come to respect, admire, be awed, and at times disturbed by the single-minded hyper-focus and fanatical determination required to create such physiques — the insane will to overcome all physical and mental limitations in pursuit of a singular, self-imposed goal, arbitrary and foolish as it may be. These are true freaks (again I say that respectfully), and not just physically. These are strange people. A truly fascinating sport and a subculture with its own norms and values, far too out there, bizarre, and dare I say transgressive, to ever be fully accepted by the mainstream.

Like I said, I’ve yet to meet anyone else in my music circles who follows the sport, but if you do and you happen to catch Supercrush on tour, by all means introduce yourself and let’s talk professional bodybuilding.

Supercrush’s SODO Pop is out now via Don Giovanni, and you can catch the band on tour this fall.

What began as an occasional recording project designed to allow Mark Palm to indulge his pop sensibility through a series of two-song singles, Seattle’s Supercrush developed into a fully functioning band with countless live shows and many tours under its belt. Although best known for playing in a long lineage of hardcore, punk, and metal groups, Palm began exploring softer sounds in the late aughts as one of the primary songwriters of San Francisco shoegazers Modern Charms before adopting the Supercrush moniker as a vehicle for his pursuit of powerpop pre-eminence. 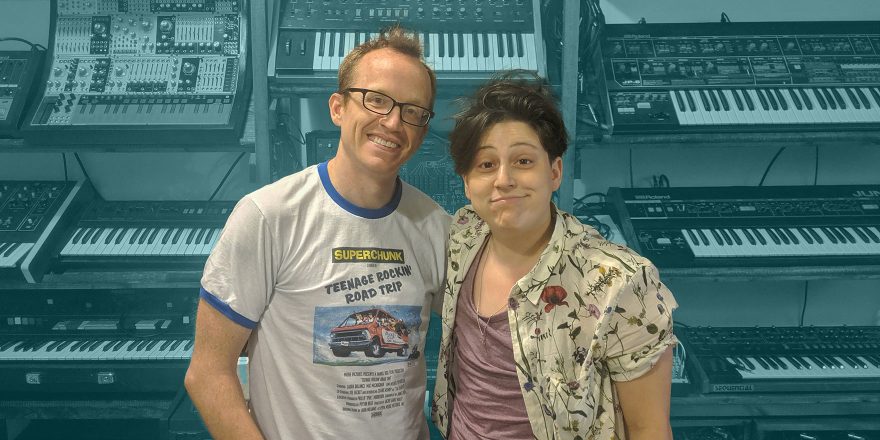 Chris Gethard Talks with Mal Blum for the Talkhouse Podcast