Playing music has always been one of the most gendered aspects of my life, and I don’t say that lightly. I’ve lived through a decade of questions and assumptions about how my supposed womanhood has shaped my art, my ability to play drums, and my day to day life. After the first couple years, I began to wonder if the answers I gave were sincere.

June 2016: We have just finished our set in Guelph, Ontario and I am catching up with a friend who lives in town and has come out to the show. A man interrupts to tell us how great our set was. He has mistaken my friend for my bandmate Augusta. He keeps talking at us until finally, while pausing for a breath my friend says “I didn’t play this show. I’m not in this band.” The man laughs and looks at me like I am one of him and says, “Oh, shit! All chicks look the same, am I right?” The look of disgust I give him in return indicates I am not a man and he mutters an apology and shuffles away.

Being asked about Rock Camp for Girls in an interview is a trap. My bandmates and I each attended the camp separately as kids before graduating to volunteer intern status and eventually becoming paid staff and music instructors. Often when a cis-man asks me about Rock Camp, he wants me to feel like a child — he wants to believe that my musical ability has not evolved since I was 12 years old. Often when a cis-woman asks me about Rock Camp, she wants me to say that that is where I found empowerment as a young woman.

When I think about the week I went to Rock Camp as a thirteen year old, I think about meeting a transgender boy for the first time and being in love with him. I understand, now, the importance of bringing queer children together. As a teacher there, I am a masculine trans person, often the first most of the campers have met. Some kids think I am a boy, others argue that I am a girl — I must be a girl if I’m at a summer camp for them. Sometimes, there is a kid I see myself in: A scrawny kid in baggy boys clothes who the girls pick on for not looking like a girl. And I am there, looking like I do, defending this kid who has barely said a word since arriving at camp. These spaces that are designed to bring girls and women together are not always so welcoming of trans people.

June 2017: We are in the middle of a live radio session at Sled Island in Calgary, Alberta. It is being broadcast from the front lawn of a shoe store that is sponsoring the event. A visibly intoxicated man approaches and is watching us perform. He’s holding a tall can in his hand and is stumbling around enjoying our music. We pause for an interview segment and he yells, “These chicks are hot AND can play!” We tread on. After the session he is still standing by and compliments us loudly on our songs. I say, “Hey, bud, if you wanna come to our shows, don’t call us hot chicks, OK?” He is taken aback. He tells me he never said that about us and starts to get aggressive. The male DJ from the radio station ushers him off the lawn. We are compensated with free shoes from the shoe store; The male DJ says, “Thank you, ladies, and so sorry about that incident.” Shoe shopping and verbal harassment — gee, I sure do feel like a woman now.

When an interviewer asks us if we are feminists, this is also a trap. It’s an attempt to push us into talking about how our music is shaped by feminist anger and female empowerment when, actually, it is often irrelevant. When a woman asks me how I am affected by misogyny, it is often in a way I cannot relate to.

Growing up a masculine AFAB, I can count the amount of times I have been catcalled on two fingers; straight men find me ugly and unapproachable and I’m happy to keep it that way. My masculinity exempts me from a lot of condescending conversations I see my femme colleagues enduring with dudes who explain how their amps work to them without asking. I’ve been playing drums for ten years now and would like to think it shows a little. As a rule, I try to keep interactions with over-excited adult gearheads to a minimum, but I can talk the classic-rock-dad-talk if I must, with sincerity even. As someone who grew up without trans role models, I have always had male idols as well as female; Ringo Starr and Keith Moon were my heroes as a ten year old — they were innovative, boyish, and cute, and I wanted a Beatles haircut.

September 2017: We are doing an interview before our show at a DIY venue in Hamilton, Ontario with the university paper. The interviewer is shy and very nervous. She is complimenting our newest album and fumbling with a piece of crumpled paper covered in scribbled questions. She launches into a series of questions about Rock Camp and how we met there, and asks us how being women affects our shows etc, etc., and we completely derail the conversation. We’ve gotten good at it at this point.

We tell her that womanhood hasn’t really hindered our rise in the music scene, and if anything, it’s actually helped us. We can be tokenized and added to shows and festivals easily just by virtue of promoters needing to add palatable girl bands to avoid criticism from anyone about inclusion or lack of diversity. We talk about how age has been the biggest restriction in the music scene — getting kicked out of bars for being underage, being constantly condescended by adults who compare us to their younger selves. They tell us how bad they were at guitar when they were 18 and how good we are. The interviewer is stumped. She has only prepared for answers to the questions she brought. I feel bad for her: She is new at this, and she’s been misguided by every other Lonely Parade interview she read as research. I get the impression that she genuinely likes our music and looked up to us as strong women.

The article is published and she is respectful of my preferred pronouns and talks about our dislike for being constantly under the microscope for our perceived genders. But she still begins the article by saying we formed our band at Rock Camp for Girls, an untrue origin story that, at this point, I have heard so many times I am starting to believe.

For generations, women have been fighting for equality in the music industry. I owe so much to the women who have inspired me, taught me, booked shows for Lonely Parade, played shows with us, or have given us a safe place to stay in a city we’ve never been to before. I understand now that the reasons I so adamantly wished to distance myself from the label of “girl band” had just as much to do with being trans as it did with having internalized misogyny; I could not detach the idea of “girl bands” from how men saw them and commodified their music. I am still disconnected from womanhood and am still incapable of writing music about it; I am in a band that has been privileged by the color of our skin and our adorable narrative. When someone asks us about our struggle, I feel gross because we haven’t had one.

I am not here to inspire cis-women. Though challenging strangers’ expectations and assumptions about me is exhausting, I am rewarded later on by not feeling pressured to perform a certain gender and keep up the charade. That is what encouraged me to change my name. That, and remembering how lost I was as a kid without a trans role model. It was not until I started to befriend trans and gender non-conforming people, that I started to open up and understand my own identity. The shame I felt when a stranger called me “sir” or when a woman questioned me in a public washroom began to dissipate. I started having conversations I simply could not have had with my girl friends and boy friends. Being generalized can be incredibly isolating, but I wouldn’t have grown as quickly if I wasn’t being put on the spot about femininity all the time. As a teenager, I was thinking a lot about how our band was being seen and how I was being seen. I understand now that I have never lived a life comparable to that of a woman’s. I was a transgender child and now I am a trans adult, and I owe it to my younger self not to hide this.

I had spent my entire musical career wanting to be treated as equal to the male musicians we play shows with — I used to want to be an outspoken feminist and fit in with women in the scene. But now, I just want to be a trans artist, living a normal life and only drawing enough attention to myself so that trans kids can find me. But mostly, I would like to not have to think about how people see me or how I feel about my identity every second of every day.

If only someone had told me about Le Tigre and their non-binary member JD Samson. Maybe if someone had just looked past the childish femininity they were projecting onto me and my bandmates when we were young and just starting out — maybe if someone had picked up on the strong masculine queer/transgender energy I have always been putting out into the world, even before I had the language to describe it — then, maybe, I could have found the trans role model I so desperately needed.

You can buy Lonely Parade’s The Pits via Bandcamp and catch them on tour this month: 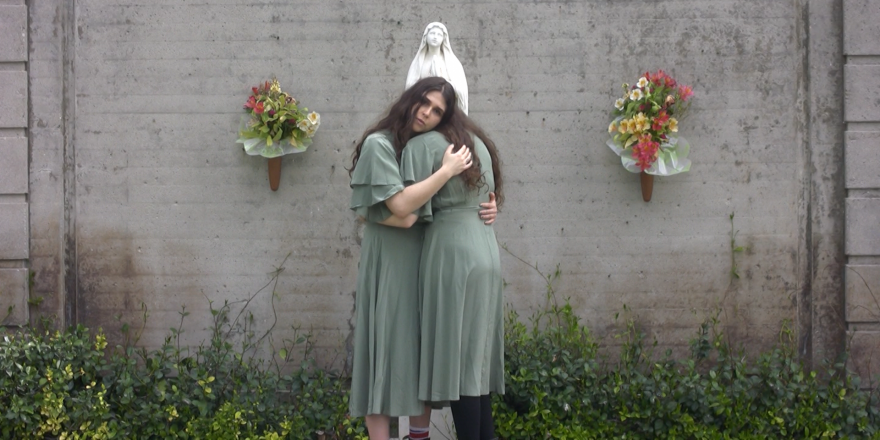 Introducing: Sophie Strauss’s “I Was”