Free Cake For Every Creature is a soft pop band currently based in Philadelphia. Beginning in upstate New York in 2012 as the recording project of songwriter and multi-instrumentalist Katie P. Bennett, the band has since expanded to include a rotating cast of friends and musicians.

For the newest collection of songs, The Bluest Star, Katie, long-term band members Francis Lyons and Heeyoon Won, and many friends spent the second half of 2017 slowly recording tracks in various rooms in Katie and Francis’ apartment on a busy street in West Philly. While these songs are a return to Katie’s comfortable home-recording beginnings, they also lay the foundation for a growing project based on collaboration, experimentation, and intentional arrangements. With specificity and honesty, Bennett sings about friendship, love present & past, and the painful process of letting people out of her life.

I approached making the video for “Around You” the same way I approached recording the song. I wanted to have fun, to collaborate with friends, and to have it be true to my life. A videographer I admire expressed interest in making the video, but I knew that, despite her skills, she’d never be able to capture me as openly as my friend Meghan could.

I met Meghan at a Halloween party in 2012. She wore a blonde wig and perfect makeup and I wore a plastic knife-thru-head and trickle of blood down my temple. Years later we both admitted we felt dumb in our costumes and thought the other looked cooler. Meghan and I talk a lot about our appearance; we laugh at the style transformations we’ve undergone throughout the years and acknowledge our insecurities about our current wardrobes and bodies.

Around the time we met, I started playing shows and began to see pictures of myself—on stage, promoting our new songs, on blogs. I found it hard not to confuse these images with who I was.  Determined to have some control over my external image, I started taking pictures of myself in different outfits, experimenting with different haircuts, buying expensive vegan makeup I’d never wear, and spending most of my money on vintage dresses from Etsy. My boyfriend Francis didn’t understand why I was taking so many of the “same” picture. Taking my own picture helped give me a sense of power and let me know my image is malleable.

At some point, as Meghan and I got closer, we each hesitantly shared our interest in taking pictures of ourselves, as if that could only mean we were narcissistic. We decided to take a day to photograph each other. We filled the trunk of her black civic with different outfits and drove until we saw an interesting backdrop. Standing in front of the lilac siding of someone’s house, or in an empty field dotted with wildflowers, I tried to relax and not worry about whether or not she captured the real me. Handing Meghan the camera, to turn on me, is an extension of my trust in our friendship.

Meghan’s boyfriend Ian is a childhood friend of Francis, and in the summer of 2014, the four of us lived in an ancient stand-alone building Ian’s dad owned in Schenectady, NY. He had his shop on the first floor and let us live on the top two floors rent-free.

We inherited the apartment from Ian’s older brother and friends and it was a mess. There were old flannels on the floors of closets, bike parts in the kitchen, dead plants on the sills of broken windows, ancient containers of garlic in the kitchen cabinet, and half-broken instruments in almost every room. There wasn’t a banister on the circular staircase, so I clung to the wall when I walked down the stairs, knowing how easy it’d be to slip down three stories.

Like Schenectady itself, the house’s disrepair and sense of being cast off made it cool, and a space I believed I could shape myself. From its clutter, I unearthed an out-of-tune keyboard and plunked away a wonky melody. Ian and Meghan knocked down a whole wall between their room and the next to create a massive bedroom. Francis, Ian, and I, along with our friend Colin, had started playing as the band-version of my music project Free Cake For Every Creature, and the apartment gave us ample space to practice and be as loud as we wanted.

I didn’t work. I felt rich—I had a thousand dollars saved from working the whole previous year at a health food store. In the mishmash apartment, with all my ambitions and frustrations and free time, I started to see myself as an artist. When my housemates left in the morning for work, I got up too, made instant coffee, and sat on the floor by the window in front of my 4-track. In the early mornings, the sounds of birds trilling interwove with my hesitant songs.

As far as I knew, Meghan and I were the only twenty-two year-old girls in town. In the evenings we re-watched Romy & Michele’s High School Reunion, made mixed drinks with fresh watermelon, and sat on the back deck, peering over the edge at the empty, weed-strewn lot.

I loved her style—her vintage Roy Orbison tee shirt she’d pair with a mini skirt, her spaghetti-strap ‘90s dresses that showed off her back tattoo (a picture of two people kissing in the night, stars exploding behind their heads). She had a vanity in her room like she was Marilyn Monroe in The Misfits.

We talked pulp artists, vintage Playboys, and Patsy Cline. She said if she ever shared her music, she’d go under the name “tumbleweed.” While drifting off to sleep, my ear against my mattress on the floor, I heard the distant melody of a song she was working on in her room beneath me.

While biking in circles around the mostly people-less town, I saw an advertisement on the marquee of the defunct movie theater for an outdoor movie screening that evening, an arrow pointing to the Italian restaurant next door. That night Meghan and I walked the mile from our apartment to downtown. I remember fog and unlit streets, the city post-apocalyptically quiet. We squeezed through the alley to the back of the restaurant, surprised to see a crowd of people in lawn chairs. The soft blue light from the screen flickered across their silhouettes.

We tip-toed to a large flower box at the edge of the lot and Meghan sat on her purse while I sat in the mulch, the sharp wood poking through my jean shorts. We’d brought tallboys and hid them in the bushes, waiting for a train to go by behind us before cracking them and pouring the liquid into our water bottles. I drank quickly, guiltily, slapping mosquitos from my ankles.

The movie was about a family who owned an Italian restaurant and the characters shouted a lot.  By the projector, a waitress in all black stood by boxes of square-cut pizza that looked like they had just marinara on them. I was excited because I don’t eat cheese, and they smelled so sweet and tangy. But when I walked closer, I saw the pizza was sprinkled with translucent parmesan. I took it as a sign I was destined to not make contact with anyone besides Meghan. We were invisible, in our bubble.

I could have kept living like a phantom, haunting the apartment and gliding through the dark town. But even while Meghan and I were giggling with our hands over our mouths, reveling in our outsider status, I thought about how Francis and I decided we’d move to Philadelphia at the end of summer.

That August, we hosted the first night of Free Cake For Every Creature’s first full-US tour in our living room. We pushed the couches into the bedrooms and tacked a string of Christmas lights to the bare walls. A few dozen people came, including my friends from the health food store and people Francis and Ian knew growing up.

The previous week, I’d suggested to Meghan that she open the show. She smiled tightly and raised her eyebrows, but didn’t say no. The day of the show, when I told her I’d put her name on the poster, she took a deep breath and said “OK.”

Sitting in a broken kitchen chair, wearing a white dress, she sang about driving three hours to pick up a friend, drinking 40s in a pool, the chorus “take me back…” My hands shook as I filmed her. The song moved me, but in my mind it’s taken on a mythical beauty because I’ll never hear it again.

When we lived in Schenectady, I took photos and videos of our lives: the shows we had in the living room, the dinners of pizza or chili, the process of recording our first album as a band.  Most of these got deleted in a hard drive crash, including the film of Meghan’s song. I’ve lost many early tapes of my songs and the building we all lived in got torn down.

Meghan and I still take pictures of each other, not because we want to capture our everlasting, unchanging spirit, but because it’s fun to. The images help us mark time, consider our identities, and bring beauty to our lives.

Toward the end of the video for “Around You,” Meghan and I take new photos of each other, suggesting a continuity of our transformations. We will change shape, tend to our curiosity, and grow old if we’re lucky.

Free Cake For Every Creature is a soft pop band currently based in Philadelphia. Beginning in upstate New York in 2012 as the recording project of songwriter and multi-instrumentalist Katie P. Bennett, the band has since expanded to include a rotating cast of friends and musicians.

For the newest collection of songs, The Bluest Star, Katie, long-term band members Francis Lyons and Heeyoon Won, and many friends spent the second half of 2017 slowly recording tracks in various rooms in Katie and Francis’ apartment on a busy street in West Philly. While these songs are a return to Katie’s comfortable home-recording beginnings, they also lay the foundation for a growing project based on collaboration, experimentation, and intentional arrangements. With specificity and honesty, Bennett sings about friendship, love present & past, and the painful process of letting people out of her life. 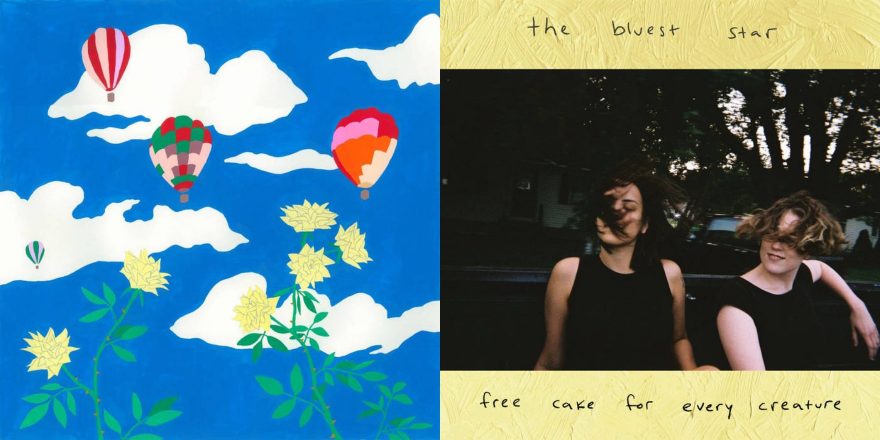 On Youth and Growth in The Bluest Star 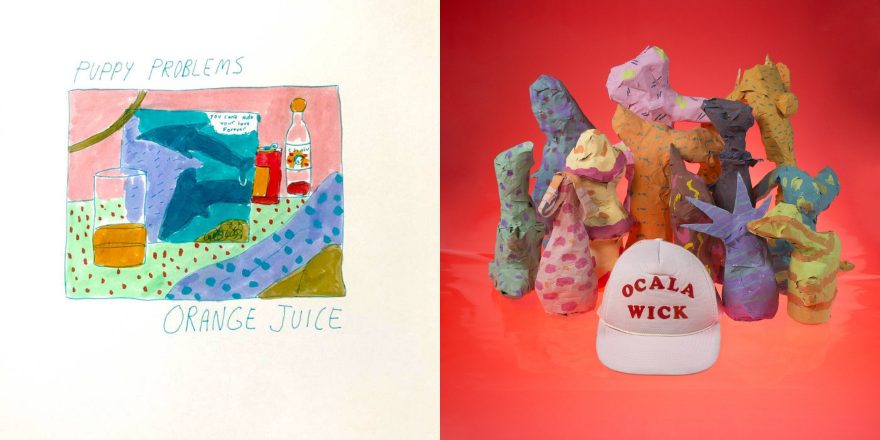 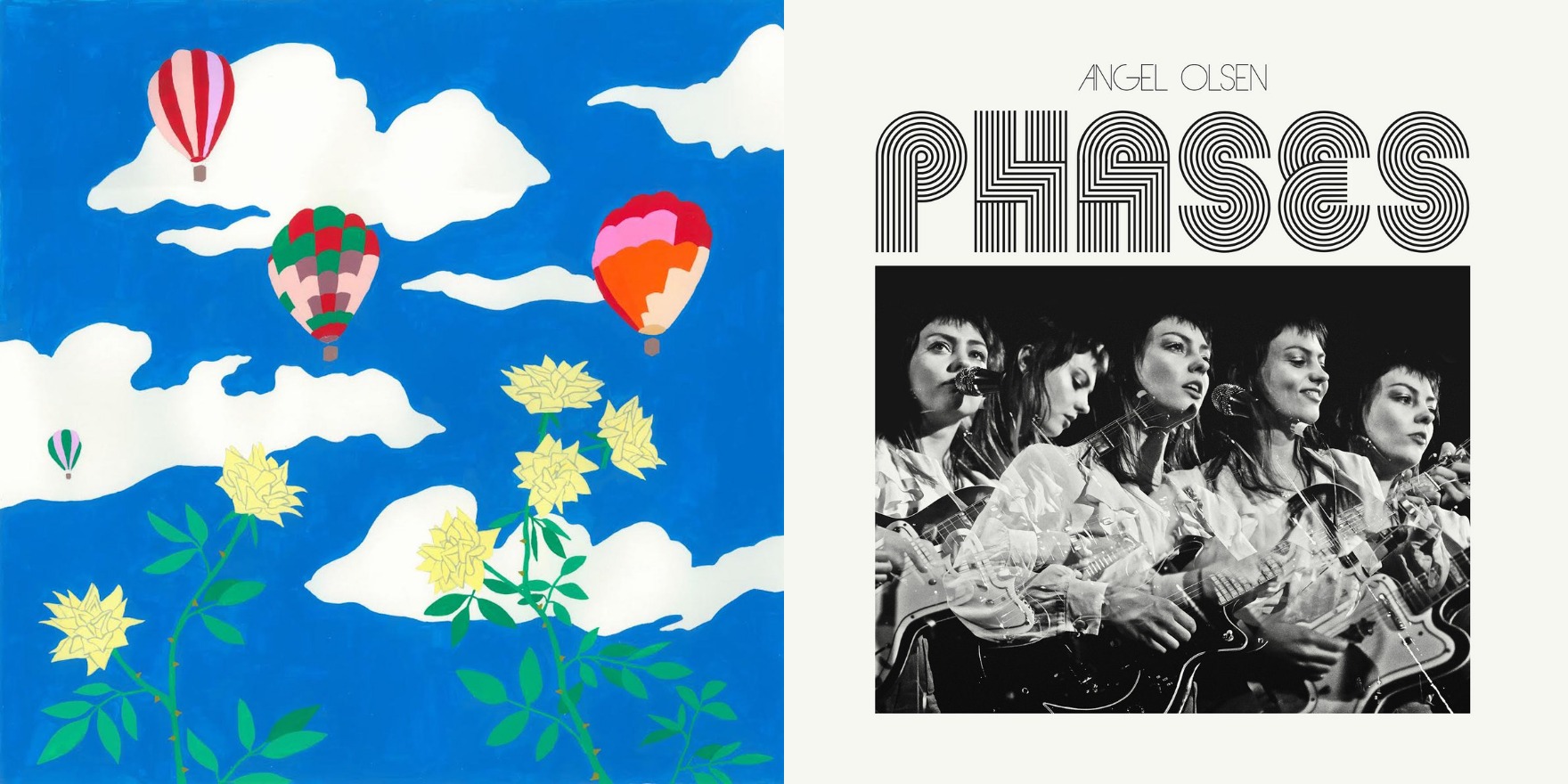 On the Cusp of Mystery and Imagination: Angel Olsen’s Phases