Chapman and Maclain Way are filmmakers from Los Angeles. They directed the Netflix documentary The Battered Bastards of Baseball, which premiered at the 2014 Sundance Film Festival, and in 2016, they directed a short documentary segment for Amazon’s docuseries The New Yorker Presents. Their new documentary series, Wild Wild Country, is now streaming on Netflix. (Image by Tiffany Roohani, courtesy Sundance Institute.)

We’d spent the last 18 months in full preparation mode, researching the incredible but somewhat forgotten story of Rajneeshpuram – a spiritual utopia built in Wasco County, Oregon, during the 1980s by followers of an Indian guru, Bhagwan Rajneesh (known today as Osho). We’d read countless books, articles and federal documents. We’d conducted dozens of pre-interviews. We’d scoured through 350 hours of archival footage with a fine-tooth comb. And we were now about to board a plane with our producer, Juliana Lembi, to travel halfway around the world and interview the main subject of our documentary series, Ma Anand Sheela, a convicted felon responsible for a range of criminal acts from attempted murder to mass poisoning. A woman who has been referred to by government agents as “pure evil.” Someone we’d seen in archival footage verbally annihilate the likes of Ted Koppel, Pat Buchanan, Phil Donahue and many more nationally renowned journalists. And it was now our task for the following five days to sit down and interview Sheela – face to face – at her compound tucked away in the hills of Maisprach, Switzerland.

In 1981, Sheela’s arrival and presence in Oregon created chaos the likes of which the state had never seen. When Bhagwan entered a vow of silence, Sheela took the helm of the Rajneesh organization and purchased the largest piece of private property in the Northwest, the 64,000-acre Big Muddy Ranch. The Rajneesh rapidly spent over $100 million transforming a barren ranch into their utopian oasis — complete with a shopping mall, airport, casino and a disco. But by 1984, Sheela had become entrenched in a war with local, state and federal officials. First, an Oregon land-use group sued the Rajneesh for violating state zoning laws and demanded that the all the Rajneesh buildings be dismantled. Then, shortly after, the state Attorney General sued the city of Rajneeshpuram for violating the constitutional separation of church and state, and to top off Sheela’s legal woes, the INS had filed deportation orders against Bhagwan, her guru, jeopardizing his residency in America.

With her back up against the wall, Sheela fought fire with fire. As the county elections of 1984 drew near, Sheela and other Rajneesh leaders enacted an ambitious scheme to take over Wasco County — ostensibly to rid themselves of lingering land-use issues and triple their political power within the state. The Rajneeshees sent Greyhound buses to major cities all over America and recruited over 5,000 homeless people to come live in Rajneeshpuram. The plan worked — thousands of homeless found refuge in Rajneeshpuram, and were happily registered as county voters. As the Rajneesh voting numbers ballooned, a correlative plot was enacted to depress the Wasco County voter turnout on Election Day. A few Rajneesh followers spread salmonella bacteria into the salad bars of 10 different restaurants in the nearby town, The Dalles, Oregon, and over 750 people got food poisoning. The CDC rushed to investigate and quickly blamed the outbreak on poor food handlers; it wasn’t until almost a year later, when Sheela left the Rajneesh movement on her own accord, that Bhagwan broke his silence and publicly blamed the poisoning on Sheela’s cohort. Months later, Sheela, along with several other Rajneesh leaders, entered guilty pleas to a range of criminals acts, including an attempted murder of Bhagwan’s personal physician, immigration fraud, conspiracy to assassinate political appointees, along with the salmonella poisoning. She was released in 1988 after serving 29 months of a 20-year sentence. We found her in Switzerland. And despite everything we thought we knew about her, Sheela told us she had her own story to tell …

As we settled in our seats and prepared ourselves for the long flight to Zurich, we outlined our final goals and objectives for the interview. When we’d started this project two years ago, we’d had little reason to explore a traditional true-crime narrative, namely a story built around evidence, focused on who is guilty, who is innocent, etc. The truth is, the facts of the crimes committed by Rajneesh leaders are documented and well-known. Our aim was to peel back the political and cultural layers and re-examine what led this peace-loving, religious minority group (or cult?) to poison over 750 people in their neighboring community. As we wrapped our meeting in Row 14 on this Swiss International flight, we feigned a sense of confidence about the upcoming days at hand. The unspoken truth we all knew was that the entire series would hinge on this one particular interview. The stakes were massive. Would it be possible for us to gain understanding of or find humanity in someone who was responsible for such atrocious criminal behavior?

After arriving in Zurich, we made the hourlong drive through the Swiss countryside to the small village of Maisprach. As we pulled up to Sheela’s hillside compound, I saw a small Indian woman approaching the vehicle. The first thing you notice when meeting Sheela is how tiny she really is. It was slightly jarring to reconcile the larger-than-life character she embodies in the archival news footage with the now older, gentler version that stood in front of us. Before we could even introduce ourselves, she was roasting us “Americans” for the rise of Donald Trump and the downfall of U.S. culture and politics. She was charming, outspoken and incredibly welcoming. As we toured her complex, I noticed a variety of impressive paintings on the walls. Upon closer inspection, I saw her signature on all of them. Sheela informed us she was a fine art major at Montclair State College in the late ‘60s and that she still enjoyed painting, which remained her principal passion. Hanging next to the artwork in her bedroom was a large portrait of a young American hippie with beaming eyes. When asked about the person in the photo, she simply mentioned that his name was “Chinmaya” and moved us along for the rest of the tour.

The first day of interviews went well, but was not particularly special. We made some headway discussing her upbringing and how her father’s involvement with Gandhi’s independence movement greatly influenced her as a child. However, it wasn’t until the very end of the day, when we asked about the portrait on the wall, that she took a moment to reflect deeply. For the first time in our conversation, her guard came down and she began to open up. She described the experience of falling in love for the first time. He was a Jewish American boy studying physics and she a shy Hindu girl from India studying art. She walked us through their adventures living together as a young bohemian couple in New York City during the late ‘60s. With tears welling in her eyes, she explained that after a whirlwind romance and marriage, Chinmaya passed away from a debilitating battle with lymphoma. Widowed at such a young age, Sheela threw herself headfirst into the Rajneesh spiritual movement led by the controversial guru, Bhagwan. As she rebuilt her sense of self, Sheela – at the age of just 27 – was appointed by the guru himself to lead his burgeoning worldwide empire.

Over the next four days, we saw the feisty Sheela come roaring to life. With fire in her eyes, she spoke openly about the entire Rajneeshpuram saga: she said she was never going to cave to the religious persecution her community faced in Eastern Oregon, she talked about how the decision to arm the commune members with assault rifles was done to protect her guru, and explained how she felt justified in taking political control of the town of Antelope because she was legally buying property there that was for sale. She spoke at length about the pressure she felt from Bhagwan to ensure their commune’s survival and how important it was for the Rajneesh to control Wasco County at any cost; she felt it was quid pro quo between her and homeless recruits who felt they had been rejected from their own country. She spoke about how she ultimately decided she needed to leave her guru behind in order to carve her own path, but that she would never divulge information about Bhagwan — that her role as his secretary was always to carry the cross for him. She was reliable and unreliable, and even though her version of some events was questionable, I never doubted that was sincerely how she felt during this entire saga. She continued to lash out against the current organization running the guru’s commune in India for erasing Osho’s past and making her persona non grata in the community she once helped create. And finally, she told us of the journey to rebuild her entire life and reputation from scratch after spending years in the U.S. federal prison system. The interview was complex and truly provocative. She offered no platitudes or easy answers, neither apologies nor empathy, and challenged us with every twist and turn.

As we were packing up the equipment to leave after wrapping the final day of interviews, I found myself in conversation with Sheela’s sister, who lives with her in Switzerland. She explained to me that the entire family sat Sheela down before the interview to advise her against participating – they just couldn’t understand what could be gained from revisiting this story again. Talking with Sheela’s sister, I was reminded of all the people who had ducked our phone calls and emails and declined requests for interviews. I began thinking of the courage it took for Sheela to defy loved ones and sit in that chair for five days and re-examine her life and actions. As we said our final goodbyes to Sheela, I thought of what had transpired over this past week of filming together and was overwhelmed by the unexpected respect I felt toward her – a warrior in her later years, still fighting for the ideals and convictions she believes in and battling all those who have ever crossed her.

After we arrived back home in Los Angeles, our oldest brother wanted to know everything about the interview. He was excited to know more about Sheela, “How was it? What was she like?!” The question caught me off guard – I paused to reflect, and then responded, “I think … I liked her? She’s got guts.” Chapman and Maclain Way are filmmakers from Los Angeles. They directed the Netflix documentary The Battered Bastards of Baseball, which premiered at the 2014 Sundance Film Festival, and in 2016, they directed a short documentary segment for Amazon’s docuseries The New Yorker Presents. Their new documentary series, Wild Wild Country, is now streaming on Netflix. (Image by Tiffany Roohani, courtesy Sundance Institute.) 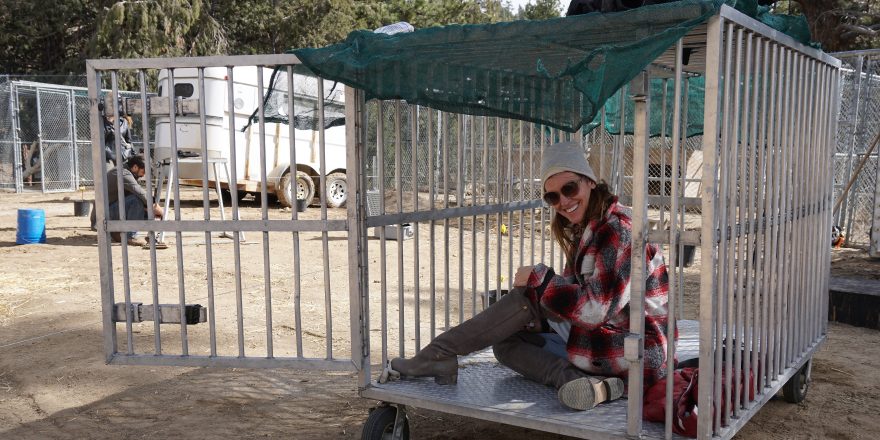 The Ultimate Game of Trust