Lynne Sachs is a Memphis-born, Brooklyn-based filmmaker. Her work explores the intricate relationship between personal observations and broader historical experiences by weaving together text, collage, painting, politics and layered sound design. Sachs has made 35 films (including Tip of My Tongue, Your Day is My Night, Investigation of a Flame, and Which Way is East) which have screened at New York Film Festival, Sundance, Oberhausen, Viennale, BAMCinemaFest, Vancouver Film Festival, DocLisboa and many others nationally and internationally. She received a 2014 Guggenheim Fellowship in the Arts. In 2019, Tender Buttons Press published Lynne’s first collection of poetry Year by Year Poems. Film About a Father Who will have its world premiere as the opening night film at Slamdance on January 24 and 27 in Park City, Utah and have its New York City premiere at Documentary Fortnight: The Museum of Modern Art’s Festival on Non-Fiction Films on February 11 and 14, 2020. (Photo by Abby Lord.)

I’ve been making personal, experimental documentary films since the late 1980s, beginning with Sermons and Sacred Pictures (1989) all the way through to The Washing Society (2018) – a total of 35 films, ranging in time from three to 83 minutes. Over the years, I have made non-fiction and hybrid works that continue to shift my point of view from shooting from the outside in, to shooting from the inside out. That is to say, I would make a few films that allowed me to “open the door” on a person, group of people or place that I knew little about in order to develop a deeper understanding through my filmmaking. Then, I would turn the camera back on myself and my immediate surroundings to produce more personal, introspective films.

This year, I completed Film About a Father Who, a feature-length film that I began shooting 35 years ago when I decided that the best way for me to come to terms with my relationship with my father, Ira Sachs, would be to witness his life, to record my interactions with him and his interactions with the world. Of course, I had no idea that it would take me so long to make this movie and that my own journey into adulthood and eventually motherhood would be reflected in the film as well. My father generously and unabashedly allowed me, and my brother, filmmaker Ira Sachs, Jr., to shoot with him anywhere and everywhere. Throughout the entire “production” period, I embraced 16 mm film, using the same used Bolex camera I purchased in 1987 for $400, every single time I saw my dad. In addition, I relied upon all forms of video tape and digital formats. Indeed, Film about a Father Who is an archeological record of our changing technology, relying upon: VHS camcorder videotape; Nagra ¼” audio recorders; mini-DV, DSLR and Osmo cameras; Zoom digital recorders; and, cell phones.

I was born in the 1960s as were my sister Dana and my brother Ira. By the time I was 10 years old, my parents were divorced. In 1985, my father began what I’ll call a series of other family scenarios, with a new wife, and lots of girlfriends – both simultaneously and consecutively. There was no point in trying to keep count. By 1995, I had four new siblings; and by 2015, we became aware that there were two more secret sisters. I was already in the thick of making Film About a Father Who (I even had the title), but I had to find a way to shape my narrative to allow for all of these new, significant people.

At Thanksgiving 2017, I hired two professional camera people and a sound recordist to join me at my brother Ira’s apartment in New York City for the first ever gathering of all of my siblings. While everything else in the film is shot by someone in the family, I hoped that this formal “set up” would produce an anchor for the narrative, an opportunity for all of us to get to know each other better and to reveal our feelings about our father and his evolving family. We shot for four hours, and the experience was, for the most part, cathartic. But, as I looked through the footage with my editor Rebecca Shapass, we noticed that everyone was extremely aware of how I, in particular, responded to their words. Even a quiet sigh or a subtle raising of an eyebrow seemed to indicate to them what I was thinking. This, I believe, is a common scenario in documentary filmmaking, one that mirrors the dramatic paradigm in which actors look to directors for an affirmation that they have done a good job. It took me a year to accept that this singular, more contrived, scene was significant in terms of who was there in the same room, but did not take the film to the place I needed it to go. Throughout 2018, I either flew my siblings to Brooklyn or went to meet them where they live. In almost every case, I convinced my sisters and brothers to go into a completely darkened space with me. We often sat in closets. It was weird and very intimate. As I recorded their voices, resonating through my headphones, I knew I was listening to them in a deeper way than I had ever done before. There in the dark, they each accessed something new about our father that they had never articulated before.

Still, one of the biggest and most intimidating aspects of making this film was finding a way to translate my own interior thoughts – be they loving, rage-filled, compassionate or simply contradictory – about our father into a convincing, not too self-conscious voiceover narration. From the very beginning, I knew that Film About a Father Who would be an essay film that would include my own writing. One of the reasons the film took so long to make was that every time I sat down to put a pen to paper, I became intimidated by the process. I felt embarrassed by my anger, apologetic about my embarrassment, and frustrated by my awkward inability to accept the whole range of emotions I wanted to express. I also had no idea how to shape my newly discovered periods of bliss and confidence that I had found with my father, especially since I had given birth to my own daughters and was more insightful about the challenges of being a parent.

In January 2019, I had a three-week artist residency at Yaddo in Saratoga Springs, New York. In my application, I explained that I had been working on one personal essay film, dare I say it, for most of my life, but that I needed a quiet, somewhat isolated place to write down my thoughts. I guess Yaddo thought it was a worthy endeavor, as they invited me to join about 12 other artists during that time. Lucky for me, I suppose, this was a particularly icy period in Upstate New York; taking long walks in the woods, as I had expected to do each day, was so risky that it was prohibited. I had no excuse but to write. For the first few days of the residency, I would diligently place my notebook on my empty desk, open it to the first available page, pull out my lovely fountain pen (which I hoped would inspire eloquence) and eventually write down a few words. Next, I would read the words – usually around 20 at most – over and over again. Then, I would scratch them out and start again. At least, I thought to myself, I am not using a computer where the Delete button beckons, seduces and devours. There were still traces, palimpsests of dwindling assertions and quotidian doubts.

After a few days of anguished horror vacui, I realized that this conventional, familiar way of writing was never going to work, at least for this film. As if like a flash of light, or a jolt of electricity, it dawned on me that I had other tools available that might help me to generate the words for which I was so desperately looking. At around 4:30 p.m., just as my dwelling in the woods was starting to get dark, I unpacked my Zoom audio recorder, put on my headphones, closed all the doors to remind myself that I had absolute privacy, plopped myself on my bed with a bunch of pillows, and began to speak into the microphone. At first, it felt awkward and humiliating, so there in the dark I decided to make myself feel even more alone. I closed my eyes and let go. I am a person who is, more often than not, consistently self-aware and polite. I say what I mean, but I sometimes cover up how I really feel with an acute attention to grammar and kindness. Now, in this funky isolation, this makeshift recording studio, this anything-goes-at-last sensation of solitude, I let loose and the words poured out. Over a period of 10 days, I recorded hours of material – oral histories, in a sense – that were generated by me as daughter, artist and director. To my surprise, I was actually able to apply the newly discovered “in the dark” approach to recording with my siblings to the way that I listened to my own thoughts. Since my editor Rebecca and I had already edited most of the visuals for the films, I was quite strategic and was able to produce a whole array of responses to specific scenes in our current work-in-process.

Of course, I knew that eventually I would need to transcribe all of the words I had spoken. In this high-tech, service-oriented world in which we all live, this part was easy. I emailed my audio files to a transcription service and within about 36 hours typed documents of an inchoate narration arrived in my email inbox. I spent the second half of my residency reading and editing my own words, almost as if they had been created by someone else. There, before me, almost magically, but then again not, was the skeleton for my film, the narration.

I actually believe that my enthusiasm for recording in the dark is an outgrowth of the current image-crazy culture in which we live. Each of us, in our own way, attempts to cultivate and control the various forms of media that feign to mirror who we are. By turning out the lights, we can begin to go beyond and below the epidermal, eventually connecting with and releasing our inner thoughts.

Lynne Sachs is a Memphis-born, Brooklyn-based filmmaker. Her work explores the intricate relationship between personal observations and broader historical experiences by weaving together text, collage, painting, politics and layered sound design. Sachs has made 35 films (including Tip of My Tongue, Your Day is My Night, Investigation of a Flame, and Which Way is East) which have screened at New York Film Festival, Sundance, Oberhausen, Viennale, BAMCinemaFest, Vancouver Film Festival, DocLisboa and many others nationally and internationally. She received a 2014 Guggenheim Fellowship in the Arts. In 2019, Tender Buttons Press published Lynne’s first collection of poetry Year by Year Poems. Film About a Father Who will have its world premiere as the opening night film at Slamdance on January 24 and 27 in Park City, Utah and have its New York City premiere at Documentary Fortnight: The Museum of Modern Art’s Festival on Non-Fiction Films on February 11 and 14, 2020. (Photo by Abby Lord.) 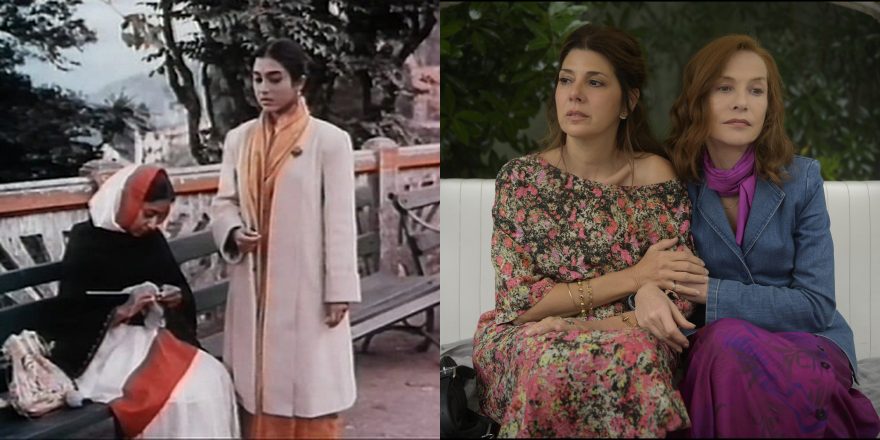 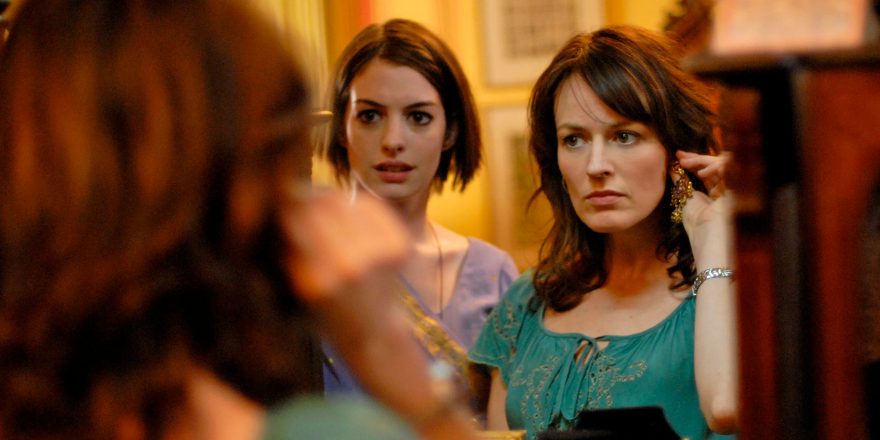 Unknown Legend: The Family Ghosts of Rachel Getting Married