Alex Ebert, probably best known as the frontman for Edward Sharpe And The Magnetic Zeroes, recently performed on Stephen Colbert’s show in an incredible green-screen suit — he essentially became the screen on which images could be projected. He enjoyed the look so much that he created a new video for a remix of his solo track “Stronger,” debuting exclusively below. In addition to his words about the video and the suit, Ebert also tells us about his pandemic quarantine, and how he’s using it.
—Josh Modell, Talkhouse Executive Editor

The conversation with the Colbert team about the suit started a month before the performance. They said probably not, and I tried to convince them, and the Friday before the Monday the director said, “This isn’t going to work. People aren’t going to know what they’re watching.” I told them that was exactly why they should do it. For a hot minute, I thought it was going to get squashed. I’m addicted to wearing the suit now. Any time you think you’re going to be documented, you wear the suit. I’m developing a whole show around it. Weathermen and women use it every day, but not on themselves.

The new video for “Stronger” is just me wearing the green suit, and I’m in roller skates the whole time, and you just key out the whole suit. You tell the computer that that specific color of green you want to replace with whatever. Essentially it creates a hole where the suit is. I live in New Orleans on Piety Street; just down the way between me and the river is this giant rusty rainbow bridge. I didn’t intend on shooting on the bridge, but I’m like, “Wait a minute, we’ve got to use the bridge.” The whole shoot went like that. I had locations in mind, and everything else was sort of as it happened.

I’m actually downright positive that I’m just getting over corona. My babymama had it, I think my kid had it for a hot minute. Right as it was breaking out, Edward Sharpe had a show in the Dominican Republic. We went, even though I thought we probably shouldn’t. In the glee of the moment, I was in the crowd, sweating. As I come back through the Atlanta airport, corona is starting to be a massive thing, and then I get sick. Mardi Gras was happening. So I’ve been taking care of myself.

I’m kinda a low-key pharmacist. I’m like a vitamin freak and immediately starting taking stuff. The furthest it got was my throat, but it didn’t get any further. Didn’t lose my sense of taste or smell, and just a slight fever. Lots of zinc, gargling with warm salt water, and mushroom-based therapies.

It’s weird to be able to shut off, which is not my norm. It’s actually forcing a little personal renaissance. It’s almost like judo. The energy of this shutdown is sort of to stop us, so instead of fighting the energy I’m going with it. I’ve been turning off the internet. I’m just really slowing everything down. Like many people, I’m a closet workaholic, constantly sort of grinding. To take this time to just slow down as opposed to… What I’ve been finding tremendous is just going with it and having no activity. And just slowing down that capitalist vessel. Shutting off the wifi and just going outside and have nothing be expected of you.

And there’s a girl that I met online, in the age of social distancing. She had taken my photo four years ago at a Bernie Sanders rally; she was his photographer. I posted that photo maybe a year ago and we’ve become friends. Just recently we’ve started voice-memoing, but we can’t see each other. A romance struck up.

Distance requires depth, because in the absence of closeness you can just have emotional or spiritual closeness. The deep dives and the process of getting to know somebody has been extraordinarily rewarding and interesting and compelling and emotional and beautiful. It’s almost like social media was invented for this moment. A lot of my time has been devoted to this relationship. I’ve never met her. I have friends that know her, so her existence is verified, and we have been FaceTiming. But never kissed. It’s cool. It’s very apropos of the times.

I think we might end up having to put a podcast together about this, because the voice memo game is so high. The first stage was texting and then her keyboard broke, like turned permanently into another language or something, so she sent the first voice memo. That was the intermediate stage. Then after that it was like, “Can I get your number?” There’s something interesting about voice memos. You don’t tend to think about what your voice sounds like, and you don’t sound totally denuded. There’s something about the one-off recording of your voice naked that feels really intimate, almost self-conscious. In some ways it’s more intimate than FaceTime. 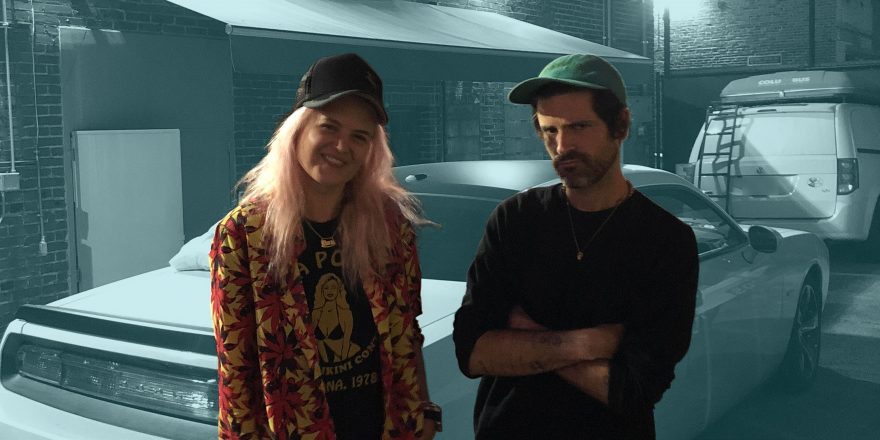 Devendra Banhart Talks with Alison Mosshart (The Kills, The Dead Weather) for the Talkhouse Podcast