Born in London, Andrew Desmond is a British film director based in Paris. After attending the ESRA (Ecole Supérieure de Réalisation Audiovisuelle) film school in Paris and obtaining a Master Degree in filmmaking at Denis Diderot University, he went on to direct music videos, commercials and several short films. His 2014 short, Entity, was selected over 50 festivals worldwide, won five awards and was bought by Cine+ and NBC Universal in France, Shorts TV in the UK and the KQED Network (PBS) in the USA. Andrew`s debut feature, The Sonata, a horror film starring Freya Tingley and Rutger Hauer, is in select theaters through Screen Media from January 10.

As a massive film fan and avid moviegoer since I was a child, I love all genres and all sorts of cinema. Period pieces, thrillers, comedies, animated movies, musicals … you name it. As a filmmaker and a writer-director, however, it’s a whole different deal. Whenever things get too close to an everyday reality, my mind switches off and my creative faculties go numb.

I have always been attracted to the fantasy, horror and sci-fi genres as a director, not only because of their inherently visual aspect, but also because they allow us to talk about very relevant, complex and powerful things, sometimes to address issues we face in the world today – only in an extremely entertaining and engaging way – and sometimes on a more personal level.

In my opinion, genre filmmaking is one of the things which cinema truly does best as an art form and in an insanely exciting way. The filter generated by fantasy permits us to fully immerse ourselves in a fictitious world and, as a director, the tools you have at your disposal are practically infinite, offering you one of the biggest toy boxes available in storytelling: You can play around just as much with light and shadow, framing and camera work as you can with sound, music, production design, visual effects, costumes and editing.

Arguably, you could say that the same thing is possible with other kinds of films, but genre filmmaking offers you the poetic license to push things just a little (or a lot!) further. I greatly respect filmmakers who make other sorts of films, but I relate less to them as a creator and an artist. Ken Loach, for example, is a wonderful storyteller and has directed a string of amazing films such as Kes, The Wind That Shakes the Barley and My Name is Joe, but I could never direct – let alone write – the kind of films he does. I could address similar issues and topics, but it would have to be processed through the deforming lens of fiction and fantasy. In that sense, I strongly relate to what Guillermo del Toro once said in an interview he gave at the 2006 Cannes Film Festival about Pan’s Labyrinth: “Reality is of little interest to me. What interests me is truth. And truth is best conveyed through fairy tales.” It’s interesting, however, to try and analyze the origin of all this from a more personal perspective.

I was born in 1987 and, like most people of my generation, I grew up on a steady diet of Steven Spielberg, George Lucas, Walt Disney, Tim Burton, Robert Zemeckis and Joe Dante, before later discovering the joys of more “adult” filmmakers such as Stanley Kubrick (who to this day remains my all-time favorite filmmaker), Martin Scorsese, David Fincher, Brian De Palma and Ridley Scott. The first film I ever saw in a cinema however was a re-release of Walt Disney’s Snow White and the Seven Dwarfs. This also happened to be my first traumatic experience as a child. When the witch first appears and reveals her ugly features to us, I started crying and screaming uncontrollably. I must have been only three or four at the time and my mother had to take me out of the cinema because of all the racket I was making. This left an indelible impression on me and was my first visceral experience of a visually compelling and fantasy-oriented film.

My second traumatic experience (although I took a long time to process and analyze it) was leaving my home country, England, and moving to France. I was around five at the time and my parents had decided to move to Bordeaux with me and my sister for professional reasons. Though there are far worse things in life than having to move to a place where wine, cheese and confit de canard are the local food currency – replacing baked beans, steamed puddings and jelly – the truth is, I didn’t understand at the time that I was indefinitely leaving England and my friends. Above all, I found myself having to face a whole new world of people who couldn’t understand me and, more importantly, who I couldn’t understand. During my first year at school in France, I didn’t speak at all and remained inside a strange “bubble.” (I had all but forgotten this until my family reminded me recently.) I was not only subconsciously soaking up all the new sounds and words surrounding me, but also getting along through everyday life, which is a tough thing to do when nobody can understand what you’re saying. This kind of introversion can make all sorts of crazy things start to sprout inside your head, especially when you’re a five-year-old. … Encouraged by my father, I spent most of my time drawing (highly formative for a future director) and watching lots of films. My mother, who was a French teacher back in England, helped me get through the language barrier and a year later, I found myself, little by little, managing to speak French. But in hindsight, this whole ordeal was probably one of the best things that could ever have happened to me as a future artist and a creative spirit.

Years later, after I’d studied at film school in Paris and started working various film jobs, I directed several short films, all of them genre-oriented, including my most recent one, Entity (2014). The film was about an astronaut floating adrift through the immensity of space who ends up encountering a strange and mysterious entity in the form of an immense colored cloud which sucks her up into a vortex and propels her into a strange, otherworldly dimension. Not exactly a portrait of everyday life. Shortly after, I started developing my first feature, The Sonata, with my producer Laurent Fumeron and co-writer Arthur Morin. The film is about a young violinist who, after learning the death of her long lost composer father, decides to head out to France (ring any bells?) to the large, old, lofty mansion where he used to live, in order to seek out her father’s origins and ultimately her own. There, she discovers her father’s final work: a strange music score encrypted with symbols which, when deciphered and played on the violin, unleashes strange and terrifying forces. Hardly your average kitchen sink drama, either. Without wanting to sound pretentious, the common thread between these two projects is that they both deal with the notion of identity, communication problems, our place within the universe, what we are meant to do (or at least hope to do) and achieve as human beings – all carefully concealed (subconsciously?) under a lavish blanket of science-fiction eye candy and, later on, gothic horror. The bubble was still there, so it would seem. Having remained with me all these years, it had become part of my personality and conditioned my creative process, often spurting out things that originated in the reality of everyday life but were now wildly bent out of shape.

Personally, I’m very proud of The Sonata, which we shot in Latvia on a very low budget and on a very tight schedule with a wonderful, passionate crew of collaborators. It has since played at many film festivals around the globe and is now being released internationally in theaters and on demand; I couldn’t be happier at such an outcome for a first feature. Now, with my eyes turned to the future, I hope to be able to sink my teeth into my next feature as soon as possible. Does the story take place outside the realm of everyday life? You betcha.

Born in London, Andrew Desmond is a British film director based in Paris. After attending the ESRA (Ecole Supérieure de Réalisation Audiovisuelle) film school in Paris and obtaining a Master Degree in filmmaking at Denis Diderot University, he went on to direct music videos, commercials and several short films. His 2014 short, Entity, was selected over 50 festivals worldwide, won five awards and was bought by Cine+ and NBC Universal in France, Shorts TV in the UK and the KQED Network (PBS) in the USA. Andrew`s debut feature, The Sonata, a horror film starring Freya Tingley and Rutger Hauer, is in select theaters through Screen Media from January 10. 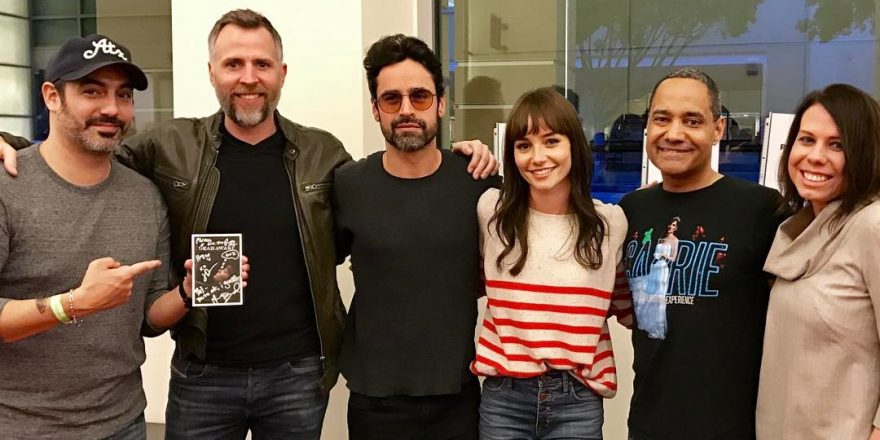