Patrick Lussier is a Canadian-born genre director, writer, producer and film editor. His latest film, the independent horror movie Trick, which he directed and co-wrote and stars Omar Epps, Ellen Adair, Jamie Kennedy and Tom Atkins, is out through RLJ Entertainment from October 18. Patrick recently directed an episode of The Purge series for Blumhouse/SyFy to air in the fall of 2019. His other directing credits include Drive Angry, My Bloody Valentine, Dracula 2000 and White Noise 2. Patrick’s website is at PatrickLussier.com.

Thematic: the thread that runs through the stories we can’t turn away from and must create ourselves.

If you look, and most of us probably don’t have to look that hard, you’ll find the inspirational thread that hooks our brains and hearts and tugs us into a story. Maybe it’s tales of the outsider, or the stranger in a strange land. Or possibly the unrequited lover, or the fear of just about anything. Whatever those threads may be, they wind their way through what we create, like tendrils that snare a truth within a subliminal, primal level of who we are. Likely, the psych evaluation of this would stem from who we were in childhood. At some point, a certain type of story imprinted on us, and forever after we attempt to imprint back on those same kind of stories, often without fully realizing that’s what we’re doing. It’s in our wiring.

For me, the films, the stories, the themes that I go back to for inspiration come down to two primary examples: Philip Kaufman’s 1978 Invasion of the Body Snatchers and Francis Coppola’s 1974 The Conversation. There are others: the ultimate Spielberg film, Jaws, and his less appreciated but equally brilliant Munich. Andy Davis’ The Fugitive, Michael Wadleigh’s Wolfen, Brian De Palma’s Blow Out, John Carpenter’s The Thing and, last but not least, John Frankenheimer’s 1962 masterpiece The Manchurian Candidate. On the surface, these films may seem unrelated, but running through all of them is a paranoia and fear of not being believed. There is a truth no one wants to see, and that we ourselves may even doubt.

I’ve been very lucky to have a career working in genre films. I was editing the original MacGyver back in 1991, when mullets were king, when I landed a gig cutting Nightmare Cafe, a little-known pilot for Wes Craven. That job changed my life forever. I worked with Wes as his editor on 10 features, including the first three Scream movies, and directed three films that Wes presented. I learned a great deal from him, both directly and through osmosis. I saw his thematics, the repeated themes in his work: the evil that comes from home, the defense of family and the sins suffered at the hands of our caretakers. These are the themes of his most personal and, to me, his best work.

In my movies, finding ways to instill my thematic is ever evolving. It often happens in the background, like a program I forget is running but actually influences the choices I make. Like Harry Caul in The Conversation, I believe I am making a creative choice for practical or pragmatic reasons, but if I examine closer, well, it’s because there’s a thematic program that’s constantly working away in my brain, even if I’m not always aware of it.

In The Conversation, Gene Hackman’s Harry Caul is a damaged and flawed cypher, a surveillance expert who wants to do the right thing, who confesses, seeking absolution that will be denied, because he believes an assumption that is tragically wrong. Harry’s lack of trust in those around him, even in himself, costs him every relationship, every chance at some kind of redemption, and even the life of his nameless benefactor. Novelist Michael Slade once wrote in his debut novel, Headhunter, that it’s the assumptions we make that lead to our most costly mistakes. Harry’s blindspots are myriad. Harry’s paranoia consumes him. And costs him dearly.

Philip Kaufman’s profound 1978 adaptation of Jack Finney’s classic horror/sci-fi novel Invasion of the Body Snatchers has long been my favorite film. The tagline simply states, “The Seed is Planted, The Terror Grows”; it is the very essence of paranoia. On its surface, Invasion of the Body Snatchers is a movie about alien space spores that grow into pods that duplicate any sleeping human near them, creating a perfect replica, only with the aliens’ hive mind instead of that of an individual. Dig a little deeper and the film’s real villain is the paranoia the pods create. The seeds of doubt rip apart relationships throughout the film, generating tense sequences of near panic, like where Brooke Adams’ Elizabeth follows her husband, who she is convinced is no longer her husband, and where Donald Sutherland’s Matthew believes those who have been replaced are taking over the establishment around him, leaving him powerless to fight.

For my latest directorial entry, Trick, this was a key inspiration – the idea that Omar Epps’ character, Mike Denver, believes something that sounds and feels impossible, but in his mind must be true. He’s made assumptions. Denver believes that the killer, “Trick” Weaver, is out there even when the FBI, the local police, and everyone else doubts him. They doubt him because Denver himself shot Trick from a second-story window. That does little to allay Denver’s fear. He knows there’s some other mystery at play that all those around him refuse to accept. That obsessive search for the truth will cost him, just as it cost Harry in The Conversation and both Elizabeth and Matthew in Body Snatchers.

The truth may set you free, but your sanity – or your life – may be the price.

This has been the theme of several films that I’ve worked on, the idea that we assume a thing because it either feels most likely or it’s what we most want to be true. Finding that truth or failing to see it is often paid for with innocence and blood.

The slasher genre, which was birthed in Hitchcock’s Psycho, and evolved in the original Black Christmas, Halloween and a host of others like Friday the 13th, Prom Night, Happy Birthday to Me, Terror Train and My Bloody Valentine (just to name a small sampling), culminated in Wes Craven’s 1996 film, Scream. An ode to those that went before it, Scream stands high above the others. What is it about these films that connect to the audience? At their core, they are murder mysteries. Probably the true origins of the slasher genre can be found in Agatha Christie’s 1939 novel And Then There Were None, in which 10 guests are invited to an isolated island by a mysterious host. One by one, they each are murdered until the title is fulfilled, leaving – spoiler alert – none.

In crafting the story for Trick, and even my remake of My Bloody Valentine before it, my co-writer Todd Farmer and I were acutely aware of the lexicon of past killers. In Trick, we wanted to track our investigators, a troika of characters who must solve a riddle as the killer they want to believe dead returns, year after year, practicing murder as performance art. What assumptions do they make? And what will they cost?

Trick isn’t the first time I’ve set out to capture these thematic feelings on screen, but it’s the most pointed time. Certainly My Bloody Valentine 3D has those elements, but in Trick, the very idea of what we believe to be true, what we see with our own eyes, is in fact something we cannot trust. Is it because the supernatural is at play? Or is there an idolizing copycat at work? Or is it something else altogether? That’s what Denver and his partners must discover. As the body count ticks ever upward, the game that they’re playing is much darker than Trick Weaver’s trademark “spin the knife.” Faced with facts that don’t fit, the heroes of Trick must fight the temptation to create their own truth. Because Trick’s truth will find them and will make them pay for seeking it.

Inspiration comes in all forms. It usually finds us whether we seek it or not. Kaufman’s Invasion of the Body Snatchers was so ahead of its time, so bleak and beautiful. I often wonder if it was born from his experience on The Outlaw Josey Wales, where at the start of that film’s production Clint Eastwood replaced Kaufman as director. Is that where the paranoia of Snatchers comes from? Is that what makes this story about pods taking over people so intensely real? A story that tells you those you trust most can be changed utterly into someone – or something – unknown? Snatchers is relentless in this point. Unlike Harry Caul, its two leads are likable and kind, but destined to pay a price far more costly than any Harry pays. In each of the inspirational films noted above, the characters are faced with a world which won’t accept what they know to be true. Whether it’s Jaws’ Brody yelling “shark” or Wolfen’s Dewey crying “wolf,” the authorities, society itself, denies the truth, because it fails to conform with what society wants to be true. That, of course, doesn’t stop society getting eaten. Or turned into pods.

Ultimately, I have taken inspiration repeatedly from stories about the systematic destruction of the individual, either literally or in spirit. Those stories where a collective establishment seeks to destroy any who do not conform may be my biggest fear. Odds are good that whether we are aware of what draws us or not, the thematics that speak to us are present in all the stories we hold closest to our hearts. And that we will be drawn to them over and over.

Patrick Lussier is a Canadian-born genre director, writer, producer and film editor. His latest film, the independent horror movie Trick, which he directed and co-wrote and stars Omar Epps, Ellen Adair, Jamie Kennedy and Tom Atkins, is out through RLJ Entertainment from October 18. Patrick recently directed an episode of The Purge series for Blumhouse/SyFy to air in the fall of 2019. His other directing credits include Drive Angry, My Bloody Valentine, Dracula 2000 and White Noise 2. Patrick’s website is at PatrickLussier.com. 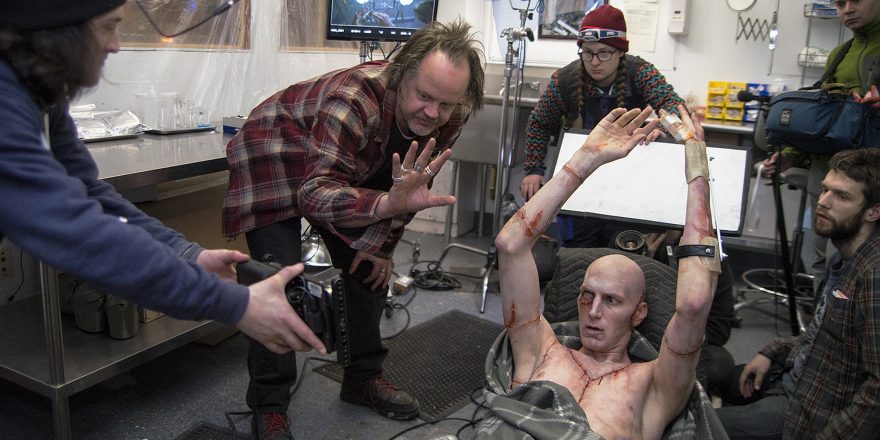 Musings of a Filmworker