Rachel Boynton is an award-winning producer and director, known for getting access to places no one has filmed before. Her latest feature, Civil War (or, Who Do We Think We Are), launches in select theaters on September 17. Her previous films, Our Brand is Crisis and Big Men, have won the IDA’s Best Feature Documentary Award, and have been nominated for an Independent Spirit Award and multiple News and Documentary Emmys, including Best Documentary. Boynton’s work has screened at numerous festivals worldwide and aired on the BBC, ARTE, DR, VPRO, CPB, and PBS, among many others. (Photo by Justine Cooper.)

The making of my new film, Civil War (or, Who Do We Think We Are), was deeply connected to my becoming a mom. Actually, “Mama.” That’s what my daughters often call me. They’re 10 and 8 as I write this, about to be 11 and 9. I love it when they call me Mama.

I always wanted children. I was never ambivalent about it. When I was little, my mom used to describe childbearing as a woman’s great superpower. None of the infinite complications or emotional contradictions of motherhood were discussed. But I always sensed they existed and I worried about them nonetheless. I worried about having my wings clipped once I had a baby, about not being able to achieve my greatest self once I had to care for someone else. A big part of me made my second film, Big Men, as proof to myself that I could do something that hard and complicated, to take advantage of a freedom of movement and an ability to take risk that I feared losing once I had a child.

My first daughter was born in 2010, while I was still shooting Big Men in West Africa. My second daughter was born in 2012, just after picture lock. And indeed, in 2014, when I was considering what project to take on next, the irrefutable fact of my daughters played a huge role in my decision-making. My first two films had followed stories as they unfolded — stories of white men pursuing power and profit, stories about what it means to be an American, here and abroad. And they were both vérité films. Making a vérité film is its own kind of hell for anyone who wants to feel in control of any portion of her fate. It requires a constant embrace of the unknown, a daily recognition that your film and your life are in the hands of a story you don’t control. I always thought of it as the ultimate spiritual exercise in letting go, while never giving up and never letting your attention waver.

This is not the sort of film you can make when you’re caring for young children. The sleep deprivation alone prohibits it, not to mention that your schedule is no longer your own. You can’t drop everything at a moment’s notice to film the most recent oil pipeline attack in the Niger Delta, or the last-minute meeting on how the new president of Bolivia should confront a brewing revolution.

I knew I needed to work in a new way. But my films had always sprung from questions and curiosity. They had always sprung from my desire to learn and to explore the unfamiliar, to broaden my understanding of the world, rather than to tell a story that I, or the people in it, already knew well. I have always wanted to feel like I’m discovering through filmmaking.

Civil War (or, Who Do We Think We Are) sprang from that curious part of me, and from my need to make a movie that could work given my new life. I couldn’t follow a single story over time. I needed to make something that would be best told in parts, and best shot in the short bursts of attention that mothering young children allows. In 2015, when I first learned that there were people – many people – in America, who vehemently believe that the Civil War was not fought over slavery, I knew I wanted to explore it. It seemed obvious that, by examining that one fact, I could understand something fundamental about who we are as a nation and why we are, presently, so divided. And it was clear to me that telling the film in an episodic way was the right approach. There are so many ways of seeing in this country. I wanted to explore how Americans — of all different races and ages and regions — see and feel. And I wanted to understand why they feel the way they do.

I never felt a need to prove the facts — it was important to establish them in the very first moments of the movie: The Civil War was fought over slavery, from the South’s perspective. The North did enter the war to preserve the Union, not in the name of some higher, moral vision of equal rights. Those facts had to be taken as given, because they are historically true. The more interesting questions to me were always about feelings — in the North and the South, among Black people and white people and everyone else — because, in the end, each of us is insisting on a version of truth that validates our feelings. None of us is simply dealing with facts. So what exactly is it that we feel? And why do we feel the way we do?

The one feeling that connects everyone in this film, North and South, is a knee-jerk, vehement conviction that we shouldn’t really talk about this. We shouldn’t talk about the profound pain of our past, because it’s too uncomfortable. It makes us feel bad. We should focus on what feels good — the achievements and heroic moments. And yet so much of this country’s past isn’t heroic, from slavery, to white supremacy, to wide scale denial of historical truth. How do we face the stories we’re not proud of as a nation, and recognize the ripple effects in our own lives — and still come out more unified in the end?

As I write this essay, my mother just texted me a link to a video of a school board meeting near where she lives. In it another mother, dressed in a T-shirt with “MAMA” across the front, speaks about how she is “a mama bear … and nobody’s going to mess with our cubs.” As the board discusses the shape of the school year to come, she says, “Unmask our children. We’re done asking for permission. We are going to be unmasking our children, tonight.” The video gives me goosebumps. As the mother of two young children who can’t be vaccinated and who are starting school again this month, the notion that they, or any other children, are going to be vulnerable, in part because of people like this, frightens me. Of course, this woman’s position has nothing to do with facts; it has everything to do with feelings.

This scene is a perfect reflection of our current civil war over the pandemic. No matter the facts, you will never convince a woman like this to mask her children without first acknowledging how she feels and why she feels the way she does. Even motherhood doesn’t unite us.

In making Civil War (or, Who Do We Think We Are), my goal was always to explore the possibility of a real reunion — one that recognizes the full humanity and equality of all Americans (for my sake, and of course, for the sake of my children). I think we need to own and to talk about how we feel about the past and about the present. We need to give each other a chance to feel heard and seen. Maybe, with those first steps, we can move closer to some sort of peace. Because our present conflicts will not be healed or erased by any side proving its factual righteousness: we each have to look in the mirror and recognize our blind spots and decide what we’re going to do about them. Then we can ask our neighbors to do the same.

Featured image from Civil War (or, Who Do We Think We Are) shows members of Chattanooga Connected, a discussion group that aims to engage the citizens of Chattanooga, Tennessee, in conversations that foster understanding and lasting friendships across racial lines. (Photo credit by Nelson Walker III.)

Rachel Boynton is an award-winning producer and director, known for getting access to places no one has filmed before. Her latest feature, Civil War (or, Who Do We Think We Are), launches in select theaters on September 17. Her previous films, Our Brand is Crisis and Big Men, have won the IDA’s Best Feature Documentary Award, and have been nominated for an Independent Spirit Award and multiple News and Documentary Emmys, including Best Documentary. Boynton’s work has screened at numerous festivals worldwide and aired on the BBC, ARTE, DR, VPRO, CPB, and PBS, among many others. (Photo by Justine Cooper.) 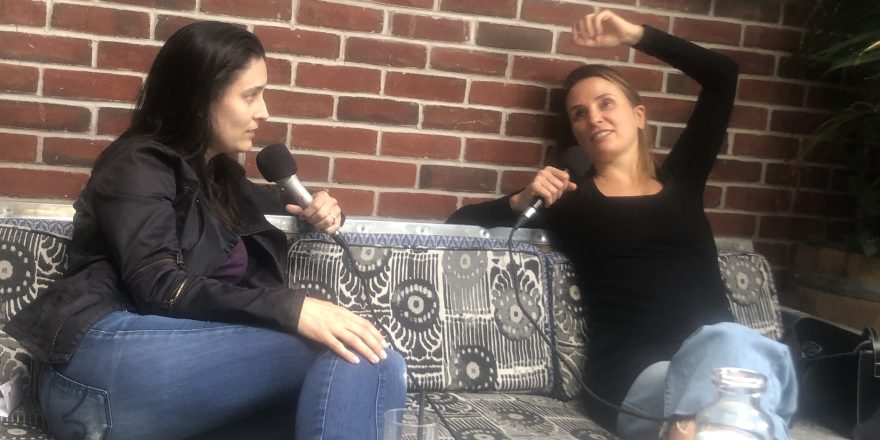 The Theater of Politics: Petra Costa Talks with Rachel Boynton