So Yong Kim is an award-winning Korean-American independent filmmaker whose new film, Lovesong, starring Riley Keough and Jena Malone, is out now. In 2006, So received the Special Jury Prize at the Sundance Film Festival for her debut feature, In Between Days; she followed up that film with Treeless Mountain, which premiered at the Toronto Film Festival in 2008 and was theatrically released by Oscilloscope to excellent reviews. Kim’s third feature, For Ellen, starring Paul Dano and Jon Heder, premiered at the Sundance and Berlin Film Festivals in 2012 and was subsequently released in theaters by Tribeca Films. Most recently in 2014, So directed Spark and Light, a short film starring Riley Keough commissioned by fashion house Miu Miu as part of their ongoing series Women’s Tales.

I wish there was a “How to … ” booklet on how to be a woman, a mother, a wife, a filmmaker – and do it all with ease and a smile. What I’ve learned is that all those things come with the messiness of life’s emotions, grit and kid stains.

My new film Lovesong stars the luminous Riley Keough and the striking Jena Malone and has two young actors making their screen debut – my two daughters, Sky and Jessie. They were seven and three at the time and they had very little say in the matter.

Throughout our years together, my husband Brad (who’s also a filmmaker) and I have been trying to figure out how we can do our work and be a family. Once Brad and I decided to have children, it seemed natural that we would make films as a family. Looking back, these moments or memories are the most vivid to me along this journey as a woman filmmaker:

Hong Kong, April 2006 – I am invited to the Hong Kong International Film Festival with my first feature, In Between Days. Sometime before we made the film, Brad and I decided we wanted to have a baby. We are on a cycle of IVF hormone shots. Brad gives me shots on my belly during the festival.

Reykjavik, Iceland, 2006 – We do the IVF procedure in Iceland after a festival there. We take the bus to the doctor and rent a friend’s apartment.

Sundance Filmmaker Labs, June 2006 – During the three-week labs, I am finally pregnant. At the end of every day, I go straight to my room, throw up and then go to sleep.

After our daughter Sky is born, I meet a D.P. friend at a cafe in Park Slope. I am feeling incredibly depressed. He says, “You just have to keep going with the baby in tow.” Then he smiles. He is right.

Cannes, May 2007 – We bring our three-month-old daughter to the Cannes Cinéfondation meetings while trying to raise financing for my next film, Treeless Mountain. Sometimes I have to breastfeed our daughter Sky during the meetings with French producers. It is awkward but seems perfectly natural to me at the time. Sky is a big hit at the festival. We have a surreal and wonderful meeting with Andie MacDowell, who wants to invest in the film. She carries Sky out of a cafe and is bombarded with paparazzi. Not only do we get to meet one of our favorite filmmakers Tsai Ming-liang, but his regular star Lee Kang-sheng agrees to pose with Sky as we shoot a little video of them on a couch together. (We had met Lee a few years before on the beach in Haeundae, South Korea, and walked up to him singing the title track to Rebels of the Neon God, but he ran away.) Later we crash the Korean pavilion for free drinks and the Korean actress, Jeon Do-yeon, holds Sky on her lap during a press conference. Afterward we found out the Korean press photographed Jeon Do-yeon with Sky and ran the headline “Is Jeon Do-yeon thinking of having a baby?!”

South Korea, September 2007 – During prep for Treeless Mountain, while at a bus stop, the mother of our actress gives Sky a squid tentacle to soothe her teething. When we are casting and visiting schools, Brad holds Sky in a sack or an Ergo. It is a major ice-breaker for the children whom I am videotaping and interviewing. Having to wean Sky off breast milk in order to shoot Treeless is particularly painful for me. At the end of a shooting day, we “deposit” Sky in a room with our two lead child actresses and they play with her until she tires out and is ready for bed. 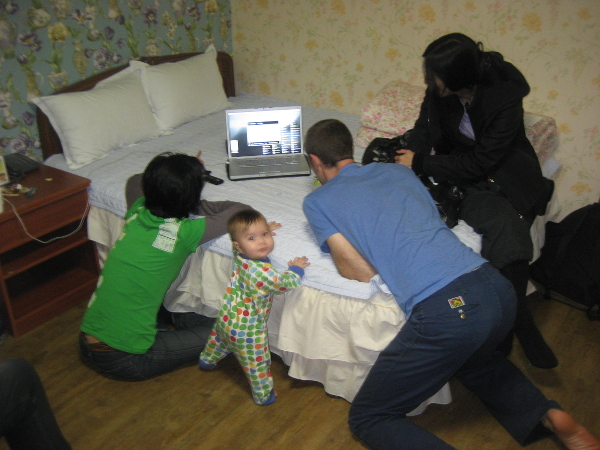 Here were are checking dailies with first A.C. Bennett Cerf and D.P. Anne Misawa. One day, we leave Sky in the van with Bennett for a few minutes while we are checking a location and Sky says her first word to him: “Dadda.” We come back and Bennett asks, “Sky speaks, right?” We say, “Nope, not yet.” He replies, “I got some news for you then.”

Queens, NY, 2009 – As we can’t get a sitter, we bring Sky along to a Q&A for Treeless Mountain we are doing at the Museum of the Moving Image in Queens. During the Q&A, Sky comes up to join us and makes everyone take their shoes off so she can arrange them on stage.

Massena, NY, 2010 – I have asked Brad to get me a fly for my film For Ellen. In turn, he is raising fly larvae in our motel room, which must be at 95 degrees. We hold Sky’s third birthday party in the motel room with the whole cast. It has a tropical theme. The flies never hatch. After cooling off the room, Sky and my cinematographer Reed Morano’s son Casey spend three weeks in there being babysat by a wild teenager, surviving on chocolate chip cookies.

New York, NY, 2010 – While shooting Brad’s Jack & Diane in New York City, there is a stomach flu that goes around. While shooting, Brad and Riley Keough (who plays Jack in the film) vomit for two days. Then I catch it, only I never stop being sick. It turns out I am pregnant with our second child, Jessie.

Berlin, NY, 2011 – We are both editing in Berlin. I am on For Ellen and Brad on Jack & Diane when our daughter Jessie is born via C-section. She rolls around at our feet while we cut, or hangs on my breast feeding, while I edit.

Lackawaxen, PA, 2015 – We shoot Lovesong and integrate our home life and children into the story of the film. At the time, it just seems easier to cast them in the movie because then we won’t have to deal with other parents. They are surprisingly wonderful in the movie, far better than we could hope for, and both very much disliked making it.

We are currently living in South Pasadena, having recently uprooted our home from rural Pennsylvania to Los Angeles. It was a drastic, seat-of-our-pants move for us and we don’t have a particular film we are planning to shoot in L.A. at the moment. But, as always, it seemed like the right move at the time for our family and for our work. We have to see what the next steps will bring.

So Yong Kim is an award-winning Korean-American independent filmmaker whose new film, Lovesong, starring Riley Keough and Jena Malone, is out now. In 2006, So received the Special Jury Prize at the Sundance Film Festival for her debut feature, In Between Days; she followed up that film with Treeless Mountain, which premiered at the Toronto Film Festival in 2008 and was theatrically released by Oscilloscope to excellent reviews. Kim’s third feature, For Ellen, starring Paul Dano and Jon Heder, premiered at the Sundance and Berlin Film Festivals in 2012 and was subsequently released in theaters by Tribeca Films. Most recently in 2014, So directed Spark and Light, a short film starring Riley Keough commissioned by fashion house Miu Miu as part of their ongoing series Women’s Tales.

Russell Friedenberg (Among Ravens) Talks Making Films as a Family