“What are your hobbies?” he repeated.

It was September 2014, and I had just gotten through my first 30 days in a 12-step program for sex and love addiction. I was begrudgingly making an “outreach call,” one of the many tools that the program encourages, to Derek, a man that I saw speak at the meeting I had gone to that morning.

Derek was gay, so it was OK for me to call him. I wasn’t breaking any of my “bottom lines,” or list of behaviors that I was supposed to be refraining from, like having sex, engaging with romantic prospects, or contacting my ex. The physical and emotional pain of withdrawal from sex and love addiction is comparable to getting off heroin, and I was barely getting by. I was desperate for anything that would make existing easier.

“The whole point of this experience is for you to meet yourself and find out who you are, what fulfills you,” he explained. “You can have fun with it. You can explore.”

If getting sober from my ex, romance and sex wasn’t difficult enough, I now had a new problem — I had no idea who I was. 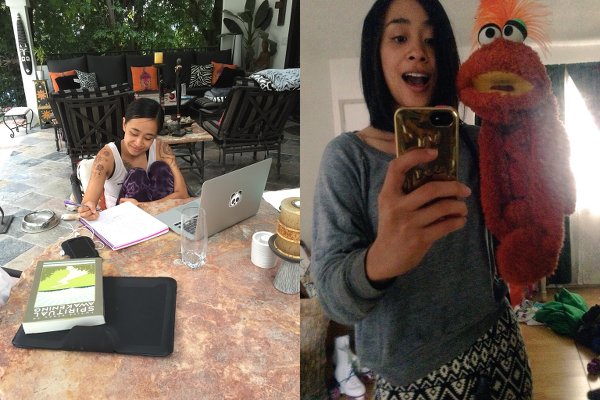 I started going to Pilates and loved it. I signed up for Puppet School because I live in Los Angeles and so, of course, we have a Puppet School. And I wrote my very first pilot.

I had never thought of myself as a writer. I didn’t have any credits, I never took a screenwriting class. I had no idea what I was doing. I read a bunch of scripts and tried to figure it out on my own.

And after only five days, I had written my first pilot. A half-hour comedy about a woman who gets dumped, and the crazy things she does to cope. A sex and love addict. Write what you know.

I sent the pilot to anyone who had ever asked me to send them something I wrote. My sad girl Twitter jokes and viral shorts on YouTube had compelled people, but they always wanted more. I’d never had anything more to show before this. I had never believed in myself, and besides, I was too busy trying to save toxic relationships or pursue unavailable men to believe in myself enough to write something.

One of the people I sent it to was Mark Duplass. A year before, he started following me on Twitter. I freaked out and sent him a DM telling him he was my hero. He told me I could send him anything I had written. I had nothing at the time. Now, I finally had something to show.

He emailed me the next day. I got the email right after a 12-step meeting where I shared about finally surrendering, and cried my eyes out.

He said he liked the pilot. And that he wanted to make a movie with me.

Mark and I met at a coffee shop and began outlining the story. Eventually, he passed me onto one of his favorite producers, Jen Roskind, and she helped me find Sarah Adina Smith, who wrote the script with me, and Sarah introduced us to our director, Suzi Yoonessi. 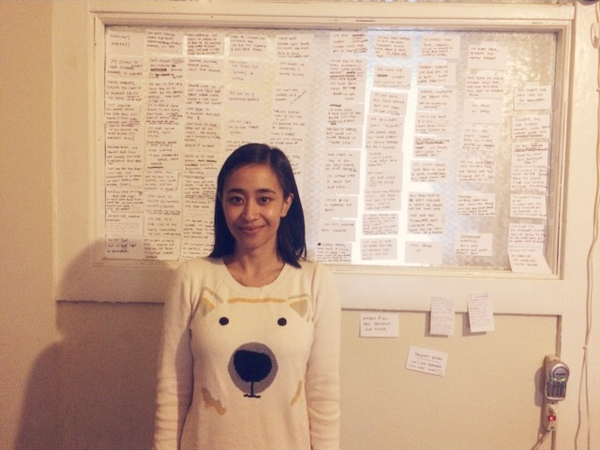 And so began the writing process. The script went through several completely different versions, and what felt like at least a hundred different drafts. There was one particular night I spent 17 hours straight with no sleep, rewriting the script completely.

The whole time, I was in horrible withdrawal. This was the part of my recovery where I had to feel all the feelings that I had been avoiding with my addiction. Endless amounts of pain, anger, longing and hopelessness. Bouts of crying in the fetal position, and absolutely no control over it. A pain beyond what I could have ever imagined. But at least I had this script. At least I could write about what I was going through. At least there was a reason to get out of bed in the morning. It was something. And it kept me going. 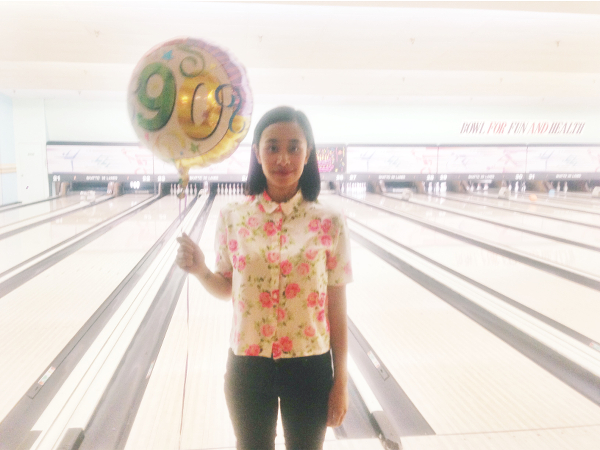 By August 2016, we were tired of waiting around for money. We decided to take action and use Kickstarter to crowdfund. Not only was I announcing our film to the public, but sharing my very personal story about my addiction and recovery.

People from all over the world donated to our film. People I look up to — filmmakers, actors, musicians, even one of my favorite drag queens — donated generous amounts of money and promoted the campaign. It warmed my heart to see so many of my friends and family, even people I went to elementary school with, donate to the film. I felt so grateful to all of my followers on Twitter, especially the ones who had watched me grow from the beginning, as a regular person just trying to be funny, only because I was trying to impress some guy I was hooking up with. (Yes, that is really how I started on Twitter. Thank you, unavailable guy.)

Another cool part of the campaign was the number of emails I got from people sharing their stories with me. Some people even wrote me to tell me that they got help after they heard my story.

We ended up surpassing our Kickstarter goal, and raised more than $64,000. John Hawkes and Melissa Leo joined our cast, and Patton Oswalt became an associate producer. Imposter syndrome began to creep in — how did I trick all these amazing people into working with me?

We had 15 days to shoot the movie — 12-hour days, and I was in almost every single scene. I had never been in a movie before, or starred in anything, or shared a scene with an Academy Award winner, so I had a lot of fear and anxiety throughout the shoot. But every time I took a deep breath, got present, and remembered why I wanted the world to see this movie, something powerful took over me and I pushed through my fears. 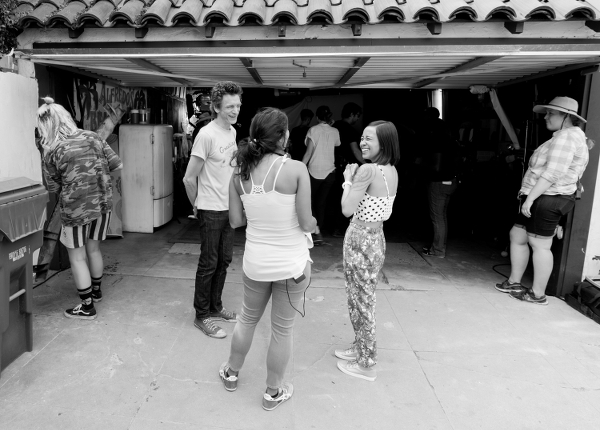 It wasn’t easy. On day 10, I was so sleep-deprived and delirious that I broke down and cried on set. It’s hard to convince yourself you’re capable of starring in a movie when you’re so tired it hurts. On day 13, I was triggered during a sex scene, and cried all the way home, and in bed until I fell asleep. It sure is hard to make a movie about things you are still in the process of healing from.

One morning, while driving to set, I couldn’t stop crying. But these were good tears, this time. I was just feeling so much gratitude. I couldn’t believe that it was all happening. Only two years before that, I wanted to kill myself and really thought that I was broken, crazy and unlovable. And somehow, here I was. I never thought things would ever feel better, I never thought I would still be alive. And here I was, living my dreams.

We screened our film as a work-in-progress to compete in the Film Lab at the Sun Valley Film Festival. We ended up winning. But what meant the most to me about that festival were the people who were deeply affected by the movie. Some people in the audience raised their hands and shared their stories of how they related. People stopped me on the street and told me they were sex and love addicts too. It reminded me that there are so many of us who have had the same experiences, the same pain, the same longing. It reminded me why this film was meant to be seen.

I’m thrilled to be premiering Unlovable at SXSW this year, and terrified at the same time. This is my first movie, my first premiere, my first big film festival. And even more than that, I am presenting my true, authentic self to the world. I’m sharing what I’ve been through, who I used to be, and who I am now. I’m scared of what people will think. I’m scared of what my family will think. There are unlimited amounts of things for me to be scared of, and damn, I can ride a bad spiral. 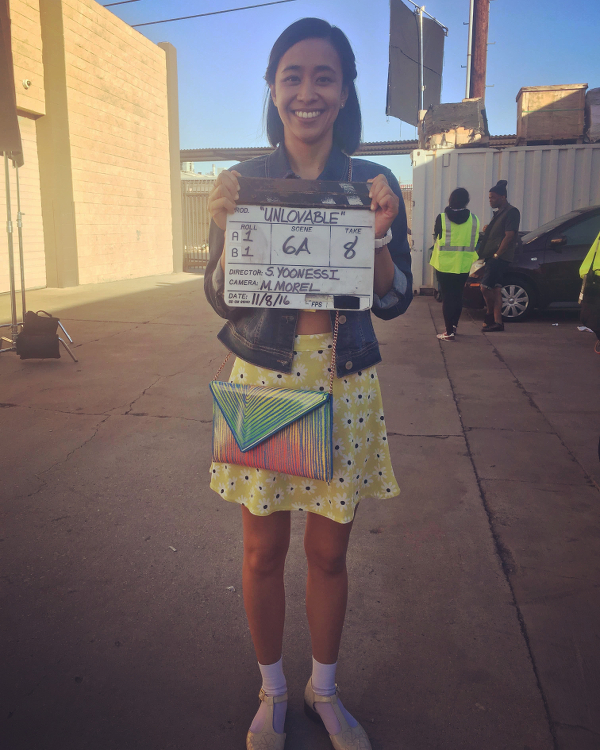 But making Unlovable saved my life. Literally. It wasn’t just about finding a hobby, and tapping into my creativity, it was about finding my voice, owning my story, and being of service to others. I can’t change the past, but I have control of what I do with it. And now I have this beautiful movie that brings so much more with it than what you will see on the screen. Making this film helped me find my value, my worth and my power. All these things I had been longing to feel for so long and looking for in all the wrong places. This movie helped me to see that it was within me all along.