Meredith Hobbs Coons (she/her) is a writer, musician, and trained speech therapist who makes her home on the Central Coast of California. She writes and performs companionate, lyrical folk songs as Lamb’s Ear and in blue ghosts ⏤ her website is here.

I was no stranger to being trapped at home prior to the onset of the COVID-19 pandemic: I’m a parent. Getting out has often been a struggle. As vaccines have become widely available, infections less deadly, and the landscape more open, the social relevance of livestreaming appears to be fading. But mine meant the world to me. Now after two years, 100 episodes, many meaningful friendships and countless valuable lessons about accessibility, community, and the structure of our world online, I’m ending it.

What for many musicians amounted to a momentary experiment or stop-gap measure before touring could resume, became, for me, an identity-affirming way to re-enter the live music space on my own terms since becoming a parent at age 24. I don’t regret a second of the time I spend with my kids. They’re sweet and hilarious — at times, their clever phrasings and bits of our family jargon have even found their way into my songs and writing. But at least where I live, it’s hard to build community with other artists as a parent, as much as I wish that weren’t true. Most opportunities necessitate childcare, and as privileged as I am with both sets of our kids’ grandparents alive, close by, and capable of caregiving, our parents are not merely our babysitters. Asking for help is hard.

For years I’d dreamed of finding some way to continue performing without having to stress about my children’s supervision — something that could be accessible to other duty-bound caregivers and vulnerable folks. That’s why, with chaotic, cabin-fever energy in early May of 2020, I took to livestreaming via Instagram each Thursday at 9:30 pm — a time when my kids would be reliably asleep. I moved around to special places in my house, including to a tent set up briefly in the living room, scaled by my then-kitten mid-song during one show. Eventually I settled on the same desk at which I also held my clients’ online speech therapy sessions as the livestream’s permanent home. At first, I lit candles and applied Pacifica Crystal Punk Holographic Lip Gloss before going live. Later, the livestream itself became ritual enough.

A big fan of alliteration, I called my series Single Song Shows: a reference to the series conceit of my guest and myself each sharing only one song during our time together. My best friend/bandmate/collaborator Trinidad Escobar always popped up in the chat, as did my dad. Pets moved in and out of frame, including the two pandemic kittens we have since raised to cathood named Rocky and Sammy. The beginning was fun and wild, but it demanded some taming, a little structure and intention.

Remember when everyone was watching The Social Dilemma and quitting social media to the extent that they could stay away? Back then, Jenny Odell’s How to Do Nothing: Resisting the Attention Economy was my jam. In it, I found inspiration to engage with social media in an intentional way: not campaigning for attention, but using it as a tool for self-expression and community-building. My livestream became part of that vision.

From hosting it to promoting it, I made sure it all felt good. Just once a week, the day of the show. I would use a photo I had taken recently (of, say, some caterpillars, the octopus mural at my kids’ dentist office, or my cat under a blanket) and build it into an online flier with Instagram’s built-in fonts. Then, I’d generate a post with my guest’s photo and bio and share it to Instagram Stories.

Did my promotion methods hack the algorithms? No, not at all. Sometimes my livestreams were well attended, sometimes not. It meant more to me to be present with my loved ones here at home or strolling at the local native garden learning about Coastal Buckwheat and California Sagebrush than hovering over my phone.

And though I wasn’t competing for anyone’s attention, nor necessarily garnering much, I succeeded in building the community I needed. Through Single Song Shows, I broadened my circle to include not just friends and family, local and far-flung, but other musicians who lived nearby that I had never met in years of playing locally. And they began including me in their in-person events like Bushwick Book Club Oakland (at musician Yoko O.K.’s invitation) and Songwriter Night at the Wicked Shamrock (thanks to SkunkPuppy and Jacob Cole).

Under the influence of author adrienne maree brown, I felt a growing responsibility to these artists, and wanted to do more for them with my humble platform. I created playlists, on both Spotify and Tidal, featuring the artists I had hosted, including fellow Talkhouse contributors Caleb Nichols, Morgan Enos, and Chad Peck. I also uploaded episodes to YouTube, so that people who were off social media could still watch, and I tried to schedule appearances to coincide with new releases to give folks another option when entering a promotion cycle. Once I discovered what my role could encompass, the experience took on an even greater level of depth, and I became more ambitious — not in terms of content, but philosophically.

Because I work as a speech pathologist and questions of accommodations for disabilities are always buzzing in my brain, it didn’t take long for my initial thoughts of access to enter broader terrain. I tried, and failed, to always include alternative text in my posts. I tried, and failed, to keep my fonts and contrasts easy to read for folks with visual impairments, to keep my gifs from blinking too much or at the wrong speed. I made sure to reupload every video when that was required for Instagram to generate captions, and I even looked into ASL interpreter services, which proved too expensive to sustain weekly. I succeeded, at least, in trying to make my videos more inclusive, and learning along the way.

This may all seem ridiculous and too lofty for a musician like me with an unremarkable follower count. However, researching all of this provided valuable insight into the many challenges of navigating spaces not built for everyone, the kind of thing disabled people face each day. For those of us who don’t always have to consider these circumstances, it can become a bit of a rabbit hole, and it shouldn’t be left to individual artists to venture through it alone. Instagram is off to a decent start in their decision to auto-caption every video — and I was so relieved to discover that they had made that change after months of reuploading each video myself — but there is more to be done. And that is ultimately the responsibility of these platforms we use.

But will there be sufficient motivation for them to continue adding supports to improve the online experience for everyone? I built my scrappy livestream during a moment in time in which all musicians were unable to play in-person. I had my pick of talented folks to join me for some conversation and a song each. Now people are out and about, trying to make up for income they lost during the pre-vaccine days of the pandemic, and the bigger names who continue to livestream appear to do so from specialized platforms behind a paywall — no hard feelings about that, musicians deserve to be paid. My view counts were never shattering any records, but they have noticeably dipped since responsibilities and social callings have taken hold of all of us again. I’m feeling the pull of the world myself.

I’ve always said that even if my dad remained the sole viewer of my livestream, that would be enough for me to keep it going. But now, I’m navigating a career shift, a familiar one, to a school-based position that I know will be as exhausting as it is rewarding. Hosting Single Song Shows was rewarding, too, and exactly what I needed at the time. In a way, it was my “pandemic album;” I’m moving onto new creative adventures now, with the knowledge that I built a small, dedicated, beautiful community — and I did it all from my own space, both online and in my home, with my kids sleeping soundly in the next room.

Meredith Hobbs Coons (she/her) is a writer, musician, and trained speech therapist who makes her home on the Central Coast of California. She writes and performs companionate, lyrical folk songs as Lamb’s Ear and in blue ghosts ⏤ her website is here.

COVID
Lamb's Ear
livestreaming
Meredith Hobbs Coons
music essay
parenting
The Films That Shaped Me – and the Teenage Movie That Made Me a Director
Talkhouse Playlist: Everything’s Bigger in Why Bonnie’s Texas 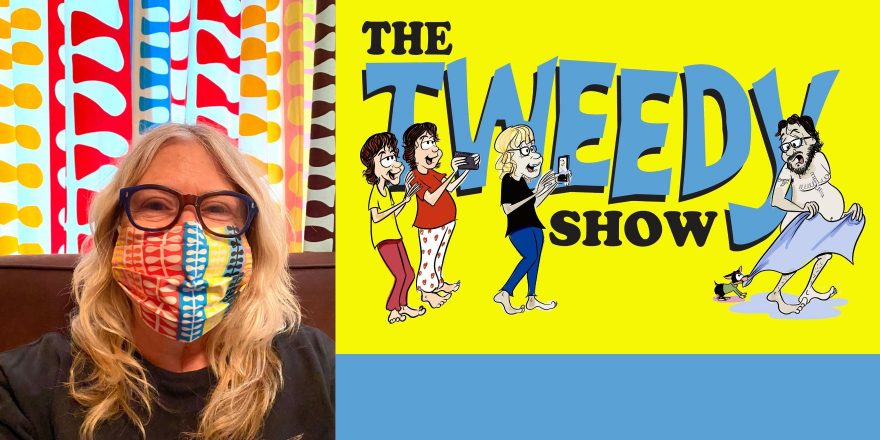 Sue Tweedy Talks The Tweedy Show, Lounge Ax, and the Stuff in Her House 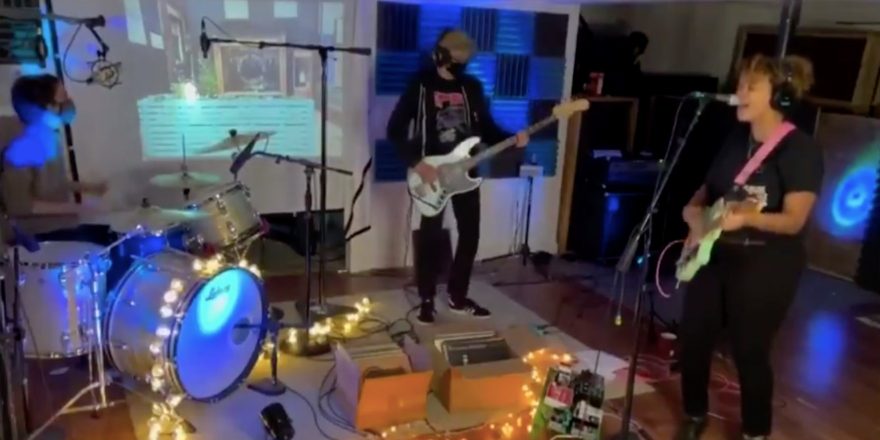 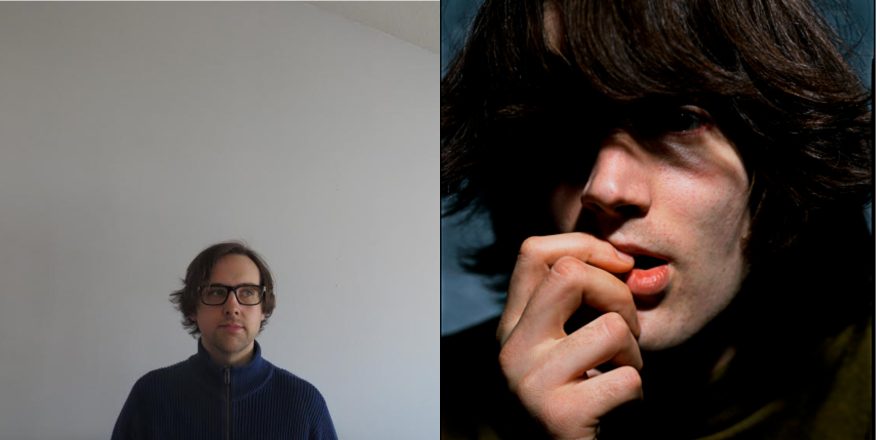