I always forget that Home Alone is a Christmas movie. I don’t know if that’s because I’m Jewish or if it’s because I watch it year-round, multiple times a year. Whenever it’s on TV, I’m watching Home Alone! It’s hard to believe that it’s been 30 years since it came out. I identify as 26, thank you, so knowing it came out in 1990 seems like ages ago. Especially now that we’re dressing in peak ’90s fashion! It could have come out yesterday! I guess the only thing that really makes this movie irrelevant is the lack of cell phones, but that’s a whole other essay. Usually I write for Talkhouse about movies that nobody loves as much as I do. But everyone I know loves Home Alone! So I wanted to dive into the classic, in honor of its 30th anniversary, and discuss why I believe it is still the greatest Christmas movie of all, especially during a pandemic. 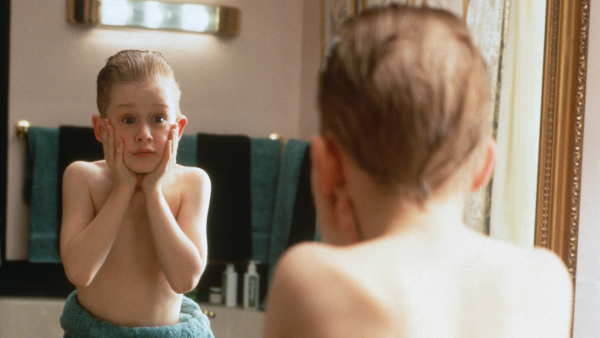 Let’s start with the “alone” part. Who knew that it’d be comforting 30 years later to find movies about people spending time alone?! Most Christmas movies are about big families getting together, holiday parties, dramatic dinners, crowds in malls vying for popular gifts, Santa and his staff making a kid’s dreams come true, and all of the other ones you’re thinking about that I didn’t include here. But Home Alone makes being alone on Christmas, with your own cheese pizza, actually look like the best possible situation. And right now, a lot of people are going to be spending the holiday alone, so I highly recommend taking the Kevin McCallister approach. Unbeknownst to him, Kevin is a quarantine icon. He realizes his family has left him alone on Christmas and his first instinct is to do everything he wants, because no one is there to tell him not to. For me, it’s the sledding in the house and eating ice cream for dinner that makes me think I should treat myself more to doing things I’ve always wanted to do. Personally, I’d break my body if I tried to sled down a staircase (I’m an old 26), but eating ice cream for dinner is definitely doable. (Unless it’s been done … I’ll never tell!) Kevin could have taken a different route when he realized that he was alone. He could have let himself get depressed and cry, or gone to a neighbors’ house. But he chose to make the best of an unfortunate situation, and I love that for him and for all of us! 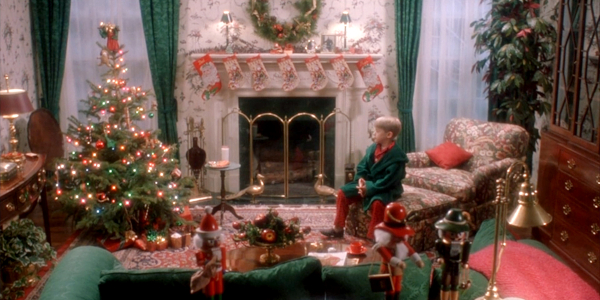 Home Alone is a movie based on privilege, and unless you grew up like a McCallister, you envied their wealthy lifestyle. I mean, look at that house! It’s “hashtag Christmas house goals.” (I’m sorry I’m a millennial, but it’s true.) Even when it’s a mess from a robbery and a billion booby traps set up by an eight-year-old, it’s still a great house. The regal brick outside, the eat-in kitchen, the finished attic – it’s beautiful! It makes me wish I didn’t live in a one-bedroom apartment right now. I’d have a lot more freedom if I had a whole house to myself during a pandemic. The McCallisters are also very wealthy. They fly first class internationally, Kevin has unlimited access to money for food shopping, and they took a family of, like, 40 people to Paris for Christmas, which is one of the most expensive times to travel during the year. Even Kevin’s traps for the “Wet Bandits” (the robbers) are high end. Like, did this family just have a huge collection of life-size mannequins that move when connected electronically? Either that or it’s obvious Kevin was able to order them on his dad’s Amazon Prime account, as one would today. And to top it all off, the pizza speaks for itself. If I’m alone, I usually get a slice of pizza, or a small personal pizza. Kevin splurges for a large pie, and that’s because he doesn’t have to worry about money! The kind of life I dream about. One night after a breakup I did order a ‘large cheese pizza just for me’ and even though I’ve had hundreds of slices of pizza since then, I will always cherish that special night.

Everyone in this movie is older and more sophisticated than they appear to be, which is why anyone at any age can relate to this movie. As a kid, it made me want to be an adult. And now that I’m an adult, I still identify as Kevin’s age. Obviously, Kevin is a 35-year-old man living in an eight-year-old’s body. He knows how to take care of himself better than I did in college. He cooks, he cleans, he fights burglars, he food shops, and he even gives free therapy sessions to people in church! If you met me at 19, you’d see someone who maybe washes her hair once a while, sends her laundry to a wash-and-fold, and orders in pad thai at least three times a week. The other characters in this movie are mature, too. Heather, the older cousin who famously miscounts the number of family members in the van, is easily 50. Buzz, Kevin’s older brother, seems like a washed-up high-school football star who never left his hometown and is bitter for it. And we can’t forget one of the robbers, Marv, played by Daniel Stern. When you see Marv robbing houses with Harry, you think this guy has to be in his late 40s. Truth be told, Daniel Stern was 33 when this movie came out and I’m not trying to out him, I just have to applaud this transformation. He played a convincing 50-year-old man and deserves all the praise. 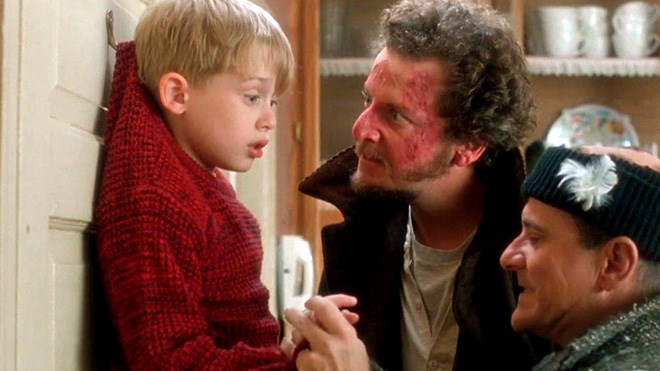 Aside from everyone being old for their age, the innocence of this movie is special. Kevin’s parents are innocent from the start for seemingly having it all together and then forgetting a kid on vacation. No parent is perfect! Kevin, although he’s a man-child ready to battle burglars, still believes in Santa. He knows he won’t meet Santa, and he’s come to terms with the fact that other people “play” Santa, but he is religious and believes there’s a higher power who has control over Christmas. He prays often, he goes to church, he silences his own demons (or the demon heater in the basement) and he performs his Christmas traditions with the hopes of bringing his family back home. I am not a religious person, but I find comfort in knowing that people hold onto their values in the wake of chaos. We’ve had to force ourselves to put on clothing and act like human beings even though we don’t leave our houses! (At least the top half …) It’s a weird parallel for sure, and I don’t pray, but I do think if we had as much hope as Kevin did, good things would happen. OK, wow, maybe this is my spiritual awakening and I’m realizing as I write this that I do believe in a higher power and that higher power is Macaulay Culkin. He was the original king of lip-syncing, after all, long before Dubsmash or Tiktok. 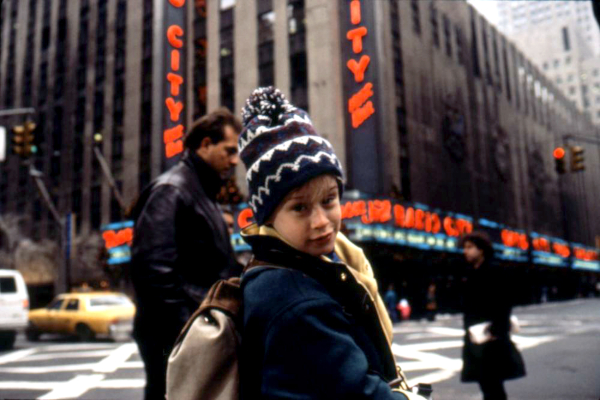 Lastly, Home Alone is the greatest Christmas movie of all time because it gave us Home Alone 2: Lost in New York. Is that a lame reason to call it the greatest? Maybe. But does the math add up? Absolutely. To this day, it’s hard to choose a favorite between them. They share so many similarities, yet are set in totally different places. Both movies give you the same set of feelings, and Kevin is an iconic single dude, making the best of an unfortunate situation, alone. I too could do that twice if I charged everything on Mr. McCallister’s credit card. So, if you’re feeling alone this holiday season, go order yourself a large cheese pizza just for you, blast your favorite song, put on a great ’90s outfit, and watch this movie that doesn’t age … just like me!

Anna Roisman
Anna Roisman
Anna Roisman is a comedian, host, writer and actor in NYC. Anna is known for hosting HQ Trivia and HQ Words on the Emmy-Nominated app. She is a regular comedian on the Buzzfeed series, “Did You See This?” Anna’s work has been featured in the Tribeca Film Festival, New York TV Festival, Just For Laughs in Montreal, People magazine, New York Times, Los Angeles Times, Vulture, Huffington Post, Funny Or Die, Elite Daily, and more. She is the creator and host of the podcast Unemployed With Anna Roisman, and co-producer and host of Quickie Fest: The One Minute Movie Festival in NYC. She writes a bad movie column called “Am I The Only One Who Loves…” for Talkhouse. She also likes good movies too! Anna performs standup comedy and sings all over. For comedy videos, reels, and press, check out AnnaRoisman.com.
Anna Roisman
film commentary
holiday movies
Home Alone
The Way Forward: Kate Teague
Best of 2020: Nathaniel Rateliff Talks Tyler Childers’s Long Violent History 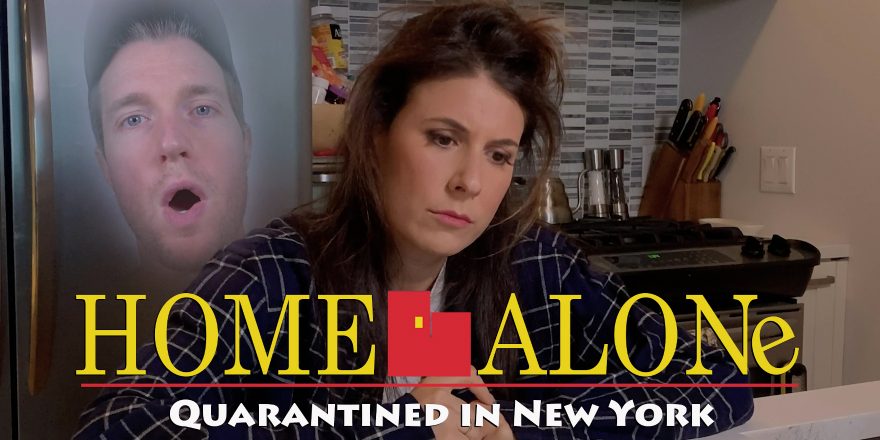 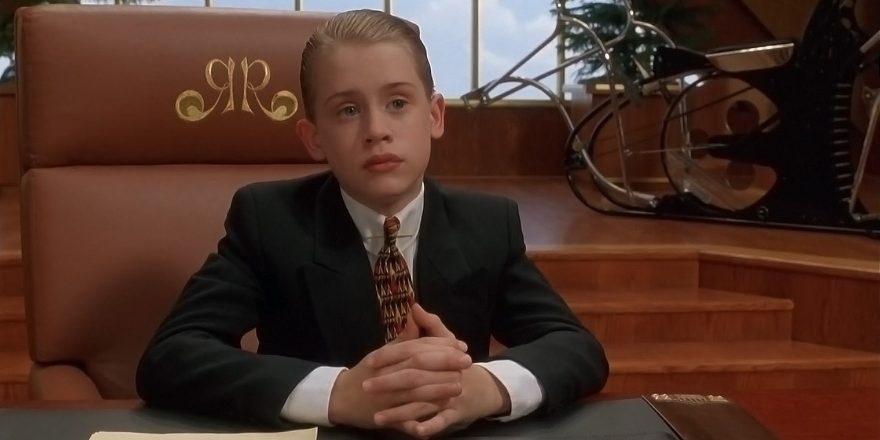 Video Essay: Richie Rich and the Search for Friends in Cinema 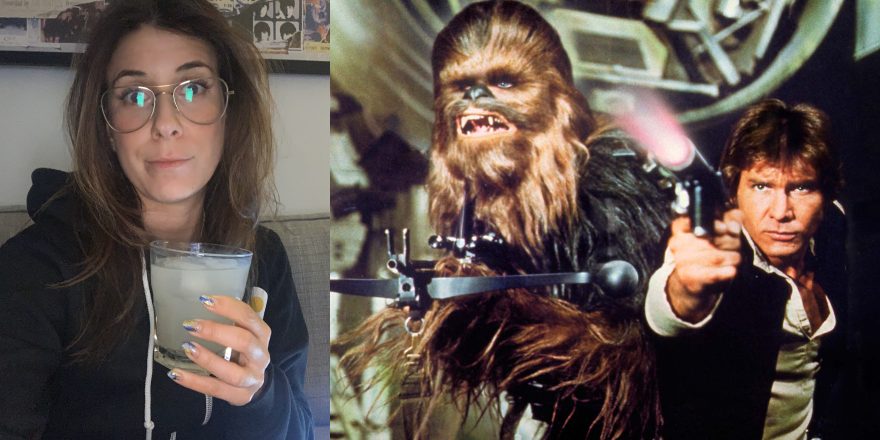 If It’s the End of the World, I Guess I’ll Finally Watch the Star Wars Trilogy (Part One)