I had just boarded a flight from Newark to Phoenix—and I was having a nervous breakdown. As we reached cruising altitude, I pulled out my notebook to write a final letter to my father, who had passed away less than 12 hours before. Instead, I wrote a song.

I’d heard grief albums before. Neil Young famously wrote Tonight’s the Night after his guitarist Danny Whitten and roadie Bruce Berry both tragically overdosed. Mount Eerie’s Phil Elverum laid his fans flat with his elegy to his late wife Geneviève, A Crow Looked at Me. But I had never known the pain in that kind of loss, let alone how to reduce heartbreak into 12 tracks.

A few months before my father passed away, I relocated to Brooklyn from the small town of Atascadero, California. He was spry and happy and we spoke daily, including the day before he and my mother were scheduled to visit me in my new city. They were booked on a redeye to New York one evening in early May, but they never got to the airport.

It was May 5. The bars around our shabby Brooklyn apartment were in full swing for Cinco de Mayo, so my then-girlfriend, now-wife Brenna and I were laying low at home. I was absentmindedly playing online chess; Brenna was reading in the other room. My phone lit up. I expected it to be my dad from the airport, eager to chat about our plans. It was my sister.

She told me that my dad had collapsed while planting flowers and died. There was no warning.

My vision went from 20/20 to something rippled and blurred, like I was staring through to the bottom of a pool of water. He was supposed to be on the plane to visit me at that moment. We were going to eat lunch at the Hello Deli, right by where David Letterman filmed, before visiting Strawberry Fields to pay our respects to John Lennon. His honorary middle name was “Ono.”

Through the confusion, the haze, I remembered what he always told me to do when he died: play “Strawberry Fields Forever” and light some incense. I did just that, choking the air with sandalwood in our ratty little living room while the Beatles played. We booked tickets early that morning to fly to California from Newark.

It was raining and neither of us could sleep, but I decided that I needed to be somewhere green. With our options limited in Brooklyn, Brenna led me to the nearest, saddest Williamsburg park so I could see a tree. I stared at it like my nature-loving father was somehow contained in it. We forced our way through wasted bar-going kids and sat on a bench in reverent silence, clothes soaked.

The next morning, I felt paradoxically fine, energized and motivated. “We’re going to do him right,” I told my aunt and sister over the phone as Brenna and I Ubered to Newark. I was like an overconfident event coordinator.

But it wasn’t long until I completely fell apart. Brenna deserves some sort of medal for successfully leading my sluggish, traumatized self through security. As we prepared for takeoff, I went into full nervous breakdown: quaking, weeping.

“You can write a letter to him,” she said sweetly, reassuringly. Like a lost child, I asked if I would get to see him again, over and over. She assured me yes.

Despite my shock, I kept what I wrote sort of sweet and joyous. Atascadero had just dried up from weeks of torrential rain; he’d been telling me how beautiful a spring it would be. I wrote about the greenery of my family home; the daffodils in bloom.

As the flight wore on, I kept writing in my notebook. I jotted down a very specific, happy memory: blasting the 1960s band Cream in my dad’s yellow Jeep Rubicon, childhood friends in tow. The caption up top: “Cream Live.”

I arrived in Atascadero, feeling like a husk of myself. My sister’s house was already a blur of family friends: dessert dishes and flowers and bodies in and out the door.

But for all the love and support, I desperately needed to get out. I dialed up my close collaborators: guitarist Ross Major, drummer Mark Folkrod, bassist Kirk MacLane, and engineer Jon Bartel. I pleaded: make music with me.

We five had never played together, but we agreed; we’d meet in Jon’s converted barn studio and see what happened. We hit record and cycled through a nauseous chord progression. I sang straight from the page, describing the Cream concert.

After 15 minutes of this racket, I gestured the band toward a sloppy outro, pounding out a single chord. A stadium-sized farewell my dad would have loved. One take and we had it.

As the week wore on, I kept writing and writing on my childhood guitar in a weird tuning. We returned to Jon’s studio and kept cutting harsh, joyous, hours-old songs in single takes.

Strangely, what came out wasn’t like those Neil Young or Mount Eerie records. The songs became smiley, jocund, accepting of his faults and struggles as much as his lovable qualities.

Growing up with him was always colorful, unpredictable. One day, you could be in for a kite-flying session, a round of homemade ice cream, or a J.R.R. Tolkien reading. The next could be defined by chronic worry, caustic humor and a compulsion to control the world around him.

He was born to an absentee father and mentally ill mother, and left a peevish, lost child. With few prospects but a ton of raw intelligence, he essentially invented his own life.

He became the impetuous, too-smart eccentric who showed up at my sister’s house and planted fresh flowers in her yard without forenotice. A multidisciplinary guy who loved his telescope, his short-wave radios, his fancy mountain bike, and his exhaustive Beatles bootleg collection.

The songs are full of our inside jokes, from a reference to an obscure PC game level called “The Jargonator” to a paraphrasal of the Jethro Tull song “Jack-in-the-Green.” Little molecules of our 24-year history as inseparable friends.

Within a week, the album was tracked. We flew home and quickly moved from Williamsburg to more comfortable climes in Queens. To occupy my still-raw brain, I co-founded a website called North of the Internet with my friend Julien, in which we conducted strange, winding conversations with artists and public figures who intrigued us. I leaned into music journalism, mostly writing for Billboard.

I wondered how, or if, I should release Funny Papers. My dad hated hysteria and melodrama; would he think Funny Papers was “too sad”? Would it upset my still-grieving loved ones to hear this?

I’ve waited almost two years, but now it’s time to let Funny Papers go out into the world. It tore me apart, the making of this record, but when I listen today, I don’t hear woe-is-me dirges; I hear laughter and springtime green. I hear late-night Beatle banter and spiritual debates. I hear Cream at the Royal Albert Hall and Herman’s Hermits at the county fair. It’s outsized and silly and rock ‘n roll, like him. I hear every side of a man I still consider my best friend.

Miss you every day, Dad. See you in the funny papers.

album premiere
death
family
Funny Papers
hear first
Morgan Enos
Other Houses
Alone, Not Lonely: On Making Violinvocations
All I Really Wanted To Do Was Direct 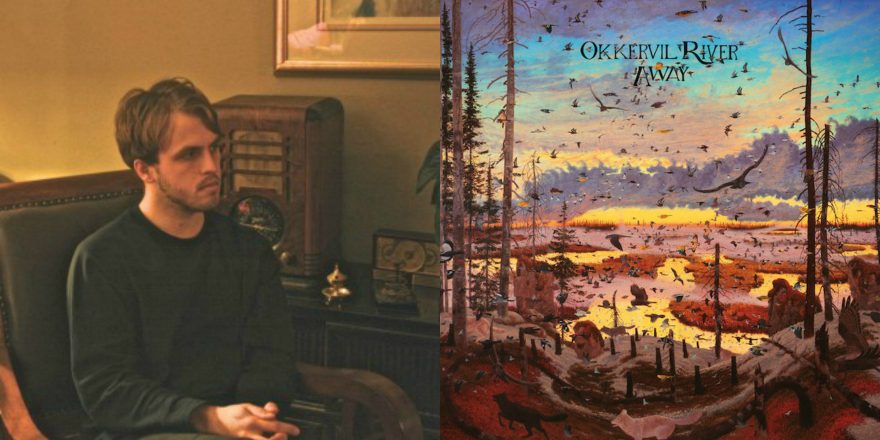