Joshua Leonard and Jess Weixler love each other a lot and will make movies together until they die.

It was another rainy day in London, and even though I’d only been there a few weeks and our sun-washed California home was only a plane ride away, it all felt impossibly far – as did my friends, my career and my self-esteem. In the wake of a few big work-related disappointments, I’d travelled to the U.K. with my wife, Alison, and our two-year-old daughter so Alison could act in a television show. What the fuck was my problem? I should’ve been excited. I could’ve been having the time of my life: I was in an awesome city with my awesome kid and my awesome wife and I finally had time to “just be creative,” to relax. But all I could think about was the rain. All this to say, I was wildly and self-obsessively depressed. I needed to do something to shake myself out of it – something weird and creative with people I loved. Something that would both address my current mid-life crisis and also (hopefully) derail it.

I was six months pregnant and on a road trip back from visiting family in Brawley, California, when Josh called. I was by myself in the middle of nowhere. It was dark and I needed to fill the car up with gas. Josh immediately started blathering on about some ridiculous movie idea he had, and I was like, “Josh, listen … I need you to stay on the phone while I stop for gas because I’m afraid I might get attacked. If I start screaming, call the cops.” He kept talking and talking and I literally didn’t hear a word he said for the first 10 minutes. After I was safely back in the car and on the road, I began to listen … and honestly, he sounded dumb. He wanted to make an improvised, micro-budget movie about a couple who – a month away from the birth of their first child – decide to go on a quest to rid themselves of all their emotional baggage. This meant he wanted us to come up with an outline and shoot it in TWO MONTHS (when I would be eight months pregnant).

Josh, Josh, Josh … I love you and I loved working with you on The Lie, but you’re a crazy person. Do I have to explain to you why a woman at 170 pounds doesn’t want to go to the bathroom in the back of a strip club or sit three-to-a-seat in a Nissan Sentra?

Jess was super pumped about the idea after our initial conversation. To be fair, she still hadn’t said “yes” yet, but I knew she’d come around. I was planning to be back in Los Angeles for three weeks at Christmastime. I figured I could assemble our key crew remotely, then hit the ground running as soon as I stepped off the plane. This would give us two weeks of pre-production and a week to shoot. It was an ambitious plan – especially considering that we presently had no script, no financing, no crew, no locations, and I was going to need to do the lion’s share of the prep work while I was still a continent away. But you know, desperate times …

I could tell how much poor Josh needed this project and I didn’t want to piss on his parade, but he woke me up from multiple naps (vital naps) with his incessant phone calls. He had this whole “diamonds are made under pressure” spiel he kept giving me, and I was like, “Dude, my white blood cell count is already high and my doctor told me I needed to de-stress my life. You are not helping.”

Now, I must say that generally speaking, women CAN work when they’re pregnant. I digress on this, but it’s important to say that at varying stages of pregnancy, women still totally need to get hired. Pregnancy can be a setback in any profession, but for an actress, you have to make a certain amount of money each year in order to keep qualifying for health insurance. “Showing” during pregnancy and post-birth usually means you can’t get hired in this town, so the fact that Josh wanted to make a movie BECAUSE I was pregnant could’ve been a Christmas miracle. … Oh, but wait, he wanted us all to work for free. Forget everything I just said. There is no Santa Claus and fuck off.

In my heart, I knew I’d made the right call reaching out to Jess. She was just as enthusiastic as I was (maybe more so!), and we began a fruitful dialogue about the structure for our movie. We did a deep-dive into our own hang-ups and unspoken fears about being parents. It was a sacred collaboration; a safe space for us both to work through our own issues.

In the meantime, I started putting the rest of the band together. Ben Kasulke, who I’ve now worked with on five projects, agreed to be our D.P. My buddy Shaheen Seth (an amazing D.P. in his own right) came on to run our second camera. Ross Partridge and Jen Lafleur agreed to act, to let me use their house as a filming location, and, most importantly, introduced me to a couple named Chelsea Bo and Sean Drummond, an up-and-coming producing team who were just starry-eyed enough to not realize what an insane idea this all was. They brought along their millennial posse of Madison McGaughy (sound mixer), Oliver Johnson (production design) and Vivian Miranda (co-producer) to help out. I have to say the enthusiasm of those ’90s babies really helped to keep the rest of us on our toes. Stalwarts Beth Grant, Janicza Bravo, Tom Bower and Michael Chieffo agreed to play roles, along with my friend Zach Shields. Erica Chidi-Cohen, who played our doula, was actually my and my wife’s doula IRL. My favorite composer, Peter Raeburn, agreed to score the film and brought on his protégé, Luke Fabia, to co-compose. It was a dream team. Jess and I couldn’t have been more exited.

I was NOT excited about any of this. But somehow, I got roped into the f’n thing anyway. Mostly because Josh seemed like he might have a nervous breakdown if I said no. Oh hell, what are friends for.

But weirdly, once we started shooting, I actually think my stress levels went down. Maybe it was the tips I was getting from Alison’s doula; maybe it was from peeing in my pants every day from laughing too hard. (Like, literally peeing in my pants. Don’t judge. Everything is different down there, OK?!) Whether it was sharing dreams of pet falcons, taking lewd pictures in front of the Los Angeles Police Academy, watching Chelsea’s nine-year-old brother do 500 fully committed jumping jacks, or just spitting loogies off a bridge and then watching the footage back in slow-motion (which anyone can and SHOULD try at home), these were the days of our lives. If 15-year-old Jess could see eight-months-pregnant Jess chasing ducks with a dildo in the rain, she would be very proud. It was an experience I never knew to wish for, but now can’t imagine that time in my life without these people and this project as a part of it. It helped me be a better mom. Ugh, I love you guys. Josh, why you so crazy?

Weirdly, amazingly, it all worked out the way I’d hoped it would. The experience of jumping into the deep-end of production with nothing but a hunch and a killer tribe did the trick of kicking my depression out of the driver’s seat (for a while, at least). And once we started editing, we realized that the film itself was really good! It’s the most ridiculous movie I’ve ever made, but buried deep underneath some killer dick jokes, I think Jess and I both managed to pull off some of our most honest work to date.

We submitted Fully Realized Humans to a bunch of festivals and lots of them said yes. We were set to premiere at the Tribeca Film Festival last month, and well … you know what happened there. On one level, this was a real bummer because it’s so rare to traverse the gauntlet of an entire production with only the warm and fuzzy feelings intact, but on another level, it’s totally cool, because selfishly, I already got everything I needed out of this one. Sure, I’m excited to share it with an audience at some point, and sure, I hope they’ll like it. But if not, who fucking cares? We made a movie for two dollars in a week. And we had fun. And we all fell back in love with the process of making the thing itself. In short, it made me happy, and being happy makes me a better dad.

Joshua Leonard and Jess Weixler love each other a lot and will make movies together until they die. 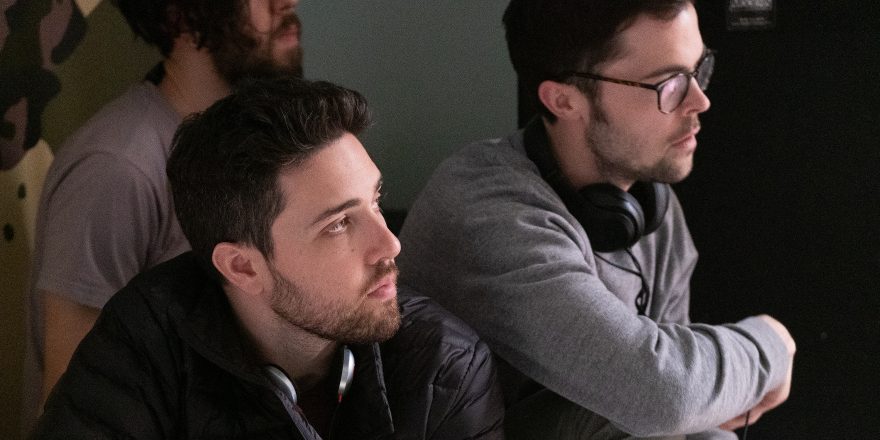