Bert&Bertie are a female writing-directing duo from London with combined backgrounds in photography and performance and their own unique style of storytelling and playful realism. Blurring lines between reality and whimsy, they craft a distinctive world full of heartwarming invention that crackles with emotion and is driven by affecting performances. Their multiple short-film awards—including a BAFTA—have paved Bert&Bertie’s way into the world of feature films. Their debut feature, the “great girl adventure” Troop Zero, starring Viola Davis, Mckenna Grace, Jim Gaffigan, Mike Epps and Allison Janney, premiered at Sundance 2019 and is now available on Prime Video. (Photo by Alexo Wandael.)

There have been certain Eureka moments throughout history where us bizarre and blinkered human beings couldn’t believe we survived so long without a certain thing: the wheel, running water, Velcro, chocolate, The Rock. Generally, we don’t know this thing is missing in our lives until we start looking for and, most importantly, needing it. Once that thing exists, our lives are changed forever. There is no going back and we are infinitely better off for having it.

Until now, believe it or not, the “Great Girl Adventure” movie did not exist. It should be a whole genre in and of itself, and yet it is not. No Goonies, no E.T., no Stand By Me for girls. That is, to be specific, a movie about a group of young girls joining forces to overcome the odds and achieve something that’s greater than themselves by working together. And, to be clear, this is not a film about romance, or popularity, or even being the best at something. Then the question becomes, if this female story is missing from our cultural consciousness, then what else is?

We were outsider girls. We didn’t fit in, or we didn’t want to, or we tried and we were rejected. Long stories. Most of us have them. Maybe our long stories were the reasons we clung to each other when we first met in London in 2005. Maybe they were the reasons we both knew we had to tell this story when we first read Lucy Alibar’s script for Troop Zero in 2014. It captured our imaginations and its heroine, Christmas Flint, stole our hearts. But as we discussed the story further, we realized that all our comparative stories, books and movies from childhood were led by boys. There would be female characters in the background or on the side, but those adventurous stories were never lead by a group of girls, teaming up, finding each other, clinging to each other, working together to make something happen. Girls’ adventures were not celebrated.

Perhaps it is not surprising, therefore, that when we teamed up to direct our first short film, Phobias, it raised eyebrows. Directing was not only a male pursuit, it was an auteur’s prerogative: singular voice, singular vision. But what of collaboration? What of a melding of minds? What of challenging each other, pushing each other out of our comfort zones? We’ve all seen Toy Story, for Christ’s sake … 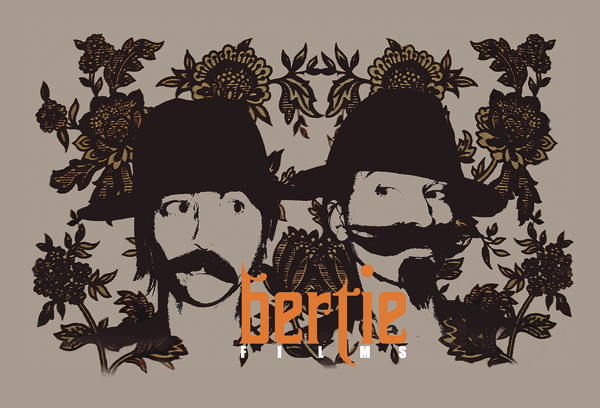 It’s possibly not surprising that we adopted the professional names we did. Becoming a team. Bert&Bertie, inspired by the belief that “well-behaved women seldom make history.” Flying in the face of the male auteur with men’s names, occasionally mustaches and, more often than not, fedora hats. It started out as a lark, but we soon realized how deep the unconscious bias against female directors really went. More often than not, we’d enter a meeting room to be met by a pleasantly surprised executive, “Oh my gosh, I thought you were men.” Yes, they actually said it! We very quickly realized that prior to the meeting our work had been viewed as being created by men, so we’d not had that initial prejudice as they watched our reel. Sadly, the bias still continues today, although as we are all aware, it’s definitely changing. Just last year, a writer friend of ours put us forward for a TV job. “You should take a look at Bert&Bertie,” he said. “Oh, they’re on our list but we’re looking at female directors for this block,” came the response. He laughed and set them straight. We took the meeting and got the job. Funny how those names almost came back to bite us. Change is afoot and it’s entirely overdue.

The female duo aspect is a whole layer of complexity that folks have to get their heads around. We’ve had our fair share “harmless” jokey comments aimed at two women working together creatively, “How does that work?” “Does it get bitchy?” “You must hold grudges for ages.” Ha. Yes. Of course. But jokes aside, there’s not much that a good old-fashioned arm wrestle can’t decide. It’s the Bertish way.

So how do we do it? What’s our process? How exactly do girls go on an adventure together? The answer is, you make your own rules. Change the world. You know … simple.

Directing duos are relatively uncommon entities in film, let alone female directing duos! As rare as a two-headed unicorn. We enjoy being changemakers; it forces us to approach directing with a fresh perspective and healthy desire to question the industry’s predominantly patriarchal system that still happily leans into the idea of “Well, that’s the way it’s always been done…” With every new film, we challenge ourselves to work harder to create change. We challenge our Heads of Department to seek out and hire female, diverse, LGBTQ crew. We challenge our productions to be more sustainable and environmentally friendly. We work hard to integrate local mentorship programs for girls into our shooting schedule, so that young women can see two women running a set, making decisions, telling stories. We never had that, but we wish we had! Where possible, we have family-friendly working hours; during post-production on our last film, we mainly worked between 9 a.m. and 6 p.m., so we, and our crew, could go home to our families. And for those reading this in disbelief, it is possible and we delivered our directors’ cut ahead of schedule. Obviously, we have no problem with working late whenever we have to, but once you switch to this new way of thinking, it’s incredible how productive you become. You just have to be the change.

We started collaborating not only due to a creative connection, but also because we were drawn to the support collaboration can bring. It helps remove the “I” from the creative process so that decisions are made because of story and character. We are very different as people, but our voice comes from the intersection of our ideas, developed through healthy, creative thrust and parry. The single most common comment we get from our director friends is how lonely directing can be both in the good times and the challenging times. And we get that. In our most challenging times, we’ve always had each other’s back. There’s something beautiful and comforting in the knowledge we can rely on one another, and that support system actually pushes us further creatively.

There are also practical advantages to being a duo. We are able to have a life, while still working like demons. For instance, we recently wrote a screenplay under an insanely tight deadline. One of us was in Los Angeles and the other was in Australia, which meant we had a continuous 24-hour tag team writing cycle. Another time, we pitched a film remotely from the U.K.: One of us was leading the pitch, while the other was breastfeeding (on mute, when required). And yes, we sold that pitch!

Without a doubt, the greatest advantage to us as a female duo is how we work on set. To keep our sets efficient and on schedule, we meticulously plan the film in preproduction; no detail is left undefined. This is a fundamental part of our process because once we start shooting we have to be a united voice. Decisions are made, wherever possible, in advance so that more of our on set time can be focussed on our cast in a calm, creative and nurturing environment. It was the greatest compliment to hear that Viola Davis, who plays Miss Rayleen in Troop Zero, was completely flummoxed by how we seemed to communicate without words and that our ideas and decisions were completely aligned. Coming from someone as dedicated and focused as she is as an artist, that meant the world. #ViolaForPresident

Being co-creators, business partners and friends isn’t always a breeze. We’ve had our ups and downs, like all relationships. We’re both strong personalities. Thankfully, though, we have the same agenda. Not to be brilliant, but to make something brilliant. Honestly, we learned to take the focus away from ourselves a long time ago. When we put all that energy and passion into what we are creating, tension dissipates and everything just flows. For us, the art is way more important than winning an argument or needing to seem like the most powerful person in the room. Once again, that’s an old system telling us what a director looks like.

We believe the Great Girl Adventure is everything. Go on an adventure alone and you face the hardships by yourself and stand on the top of the mountain alone. When there’s two, you pull each other through the hardships and, yes, you share and ration the food, but you laugh along the way, you problem-solve and you stand on that mountaintop side by side knowing you scaled it together. That’s the feeling you get watching the final scene of Troop Zero. And it’s how we felt at the end of filming the movie.

Since humans have been able to talk, stories have been told around the fire, in the form of folk tales or fairy tales. And it’s these stories that provided us with moral compasses for life. Today we tell stories in different ways but they still have the same purpose. We seek to make work that entertains but that also has consequence. Our next film is dressed up as a biopic about Elizabeth Taylor, but the story actually focuses on her midlife crisis as a “maturing” woman who’s being told by society that her time and purpose are up. So she said screw you and became the most prolific AIDS activist raising more money for AIDS / HIV than any other human begin, changing and saving countless lives, even after her death.

And this is Bert&Bertie’s “Great Girl Adventure.” This is the mountain we have chosen to climb. The rope bridge we’re trying to cross. This is the Golden Record we want to send into space. And we may not get all the way there, but Goddamnit, we’re along for the adventure.

Bert&Bertie are a female writing-directing duo from London with combined backgrounds in photography and performance and their own unique style of storytelling and playful realism. Blurring lines between reality and whimsy, they craft a distinctive world full of heartwarming invention that crackles with emotion and is driven by affecting performances. Their multiple short-film awards—including a BAFTA—have paved Bert&Bertie’s way into the world of feature films. Their debut feature, the “great girl adventure” Troop Zero, starring Viola Davis, Mckenna Grace, Jim Gaffigan, Mike Epps and Allison Janney, premiered at Sundance 2019 and is now available on Prime Video. (Photo by Alexo Wandael.)