Adam Gussow is the subject of the documentary Satan & Adam, directed by V. Scott Balcerek, which is in select theaters from April 12 through Cargo Film & Releasing. Gussow, a professor of English and Southern Studies at the University of Mississippi, is the author of Mister Satan’s Apprentice: A Blues Memoir (1998) and Beyond the Crossroads: The Devil and the Blues Tradition (2017).

I’ve spent the past year traveling the American film festival circuit, sharing my thoughts as the so-called “subject” of Satan & Adam, a documentary about an interracial blues duo that began back on the streets of Harlem in the fall of 1986. Many people seem surprised that a young white blues harmonica player — I was 28 at the time — would be brave enough, or stupid enough, to make that sort of racket in the heart of America’s best known black metropolis. They’re even more surprised to learn that I stuck it out for five years, in plain view on 125th Street, one block east of the Apollo Theater. Why? they ask. Why take the risk?

They’re not wrong to ask. Anybody who lived in New York between 1986 and 1991 knows just how rough those years were. Two months after I first joined Sterling “Mr. Satan” Magee at his streetside venue, a white mob chased three black men out of a pizzeria in Howard Beach; Michael Griffith, 23, was hit by a car and killed as he fled across the Belt Parkway. I remember that murder well, because it directly impacted my position in Harlem — in a remarkable way. The first time Sterling and I played together on 125th Street after the episode, in a media environment saturated with tabloid and mainstream coverage alike, I was treated not like an interloper but precisely the reverse: as a musician who, in choosing to join my older African-American partner in public, was offering a living image of brotherhood that the community could take pride in.

One young black man in horn-rimmed glasses came up to me with tears in his eyes. “I love you,” he said, pumping my hand. “I love you. Do you know what I’m saying?” 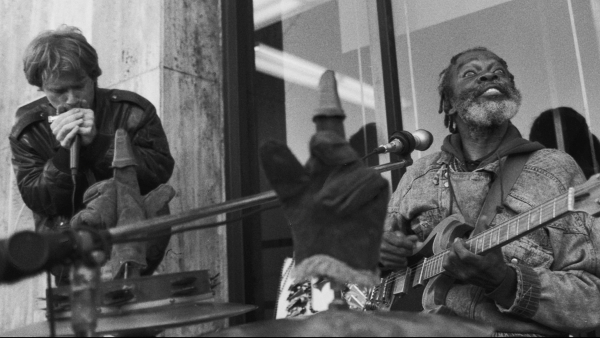 “We are the Creators!” Mr. Satan roared into his mic, gesturing not just at me but at the washtub bass player, Bobby Bennett, a.k.a., Professor Sixmillion. “We are a threesome! And while you’re at it, put your hands together for the young man! He’s been blowing that thing!” I spent a long, cool January afternoon slapping hands and chatting with dozens of people during our breaks. When I referred to “that bullshit out in Queens,” as I did a few times, everybody knew what I meant, and their responses made clear that we — they and I and my blues partners — weren’t about that. It was thrilling to be considered part of the solution, not the problem. Any residual sense of apprehension I might have brought with me dissolved, unneeded.

Those familiar with today’s rapidly gentrifying Harlem may not realize just how rare white faces were on the streets back then. With the exception of excursion busses depositing tourists at the Studio Museum — which was right next to the spot we played— and Sylvia’s Soul Food, Harlem was an all-black world, one whose configuration in white minds had been critically impacted by a range of negative media images over the years: riots in the sweltering 1960s, Malcolm X on his soapbox with finger upraised, and, in the late 1970s, several sensationalized rapes in Morningside Park. I was warned repeatedly by the white people I’d known as a grad student at Columbia to steer clear.

But I didn’t. I ventured first into the jazz clubs, La Famille and Showman’s, where my performances with trumpeter Tippy Larkin, organist Jimmy “Preacher” Robins, drummer Phil Young, and other performers led not to cries of cultural appropriation but to encouragement, bandstand mentoring, and many deep, thoughtful conversations with patrons. It was those conversations, as much as my yearning to explore and master the music in an environment where it flourished with full call-and-response intensity, that made Harlem feel like an invaluable education, one I could obtain nowhere else. I still remember how thrilled I was when Robins, a Deep South R&B singer, offered me a legit gig at a club on 125th; we followed a young jazz violinist named Regina Carter onstage. 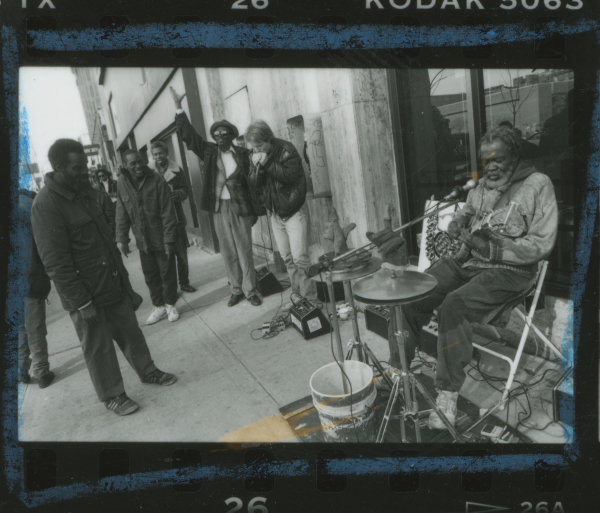 The streets were next, and the streets were rough. 1989 was the spring of the Central Park jogger and the (falsely accused) Central Park Five — some may remember a vengeance-based full-page Times ad placed by real estate mogul Donald Trump — and the long, hot summer of Do the Right Thing. The only time I was threatened in my five years as a Harlem busker happened two weeks after Spike Lee’s movie hit the theaters. It was a shattering moment—not because any violence was done to me, but because the two men who threatened me spoke from a deep, pained sense of accumulated grievance whose legitimacy I couldn’t deny, and because their challenge forced me to reckon with an uncomfortable truth. Since innocent black men were being killed by whites when they wandered into the “wrong neighborhood,” why should I assume that I was completely safe in Harlem, exempt from all black anger?

They didn’t use the term white privilege — it wasn’t current then — but that, in a sense, is what they forced me to confront. If I wanted to play the blues on the streets of Harlem, why should I risk nothing? The friendship and fellowship I’d encountered there was real, but it wasn’t the whole story. My musical partner, no matter how much power he wielded in his small corner of Harlem, couldn’t protect me from every possible act of aggression.

That knowledge hurt. But I was grateful for it — and grateful, curiously, to the two men who had opened my eyes. After laying low for a couple of weeks, I went back down to Harlem and Mr. Satan and I picked up where we’d left off. But the feel-good pastorale was over. I was playing the blues for real now. I could have stayed away, taken what I’d learned from black culture and profited from it on other, whiter, bandstands. But I didn’t. I took my stand, determined to continue playing with a man I considered a musical genius. 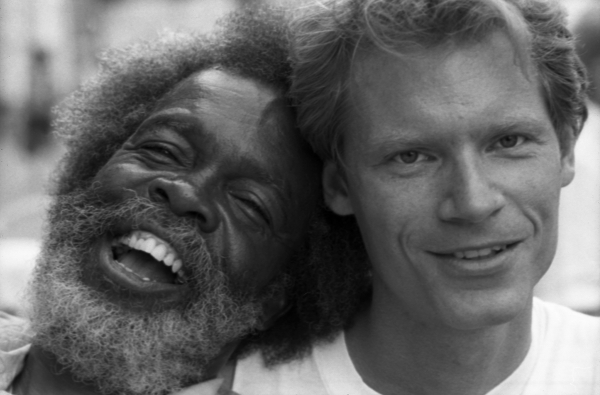 Or at least that was the plan. But when Yusef Hawkins, a 16-year-old black teen, was shot to death in the Italian neighborhood of Bensonhurst a couple of weeks after I returned, I was so upset — not for myself but for us, Mr. Satan and our ministry of reconciliation and the people of Harlem we’d been ministering to and the people of black New York writ large — that I deliberately exiled myself from Harlem for a good long while. There are times when doing the right thing is the only thing you can do, because doing anything else hurts too much.

Yet those crisis moments, too, ended up passing, and Mr. Satan and I resumed our busking life. Early in 1990, we went into the studio to record a demo; by June we were opening for Buddy Guy in Central Park, which in turn opened other doors — including, within a year, a debut album entitled Harlem Blues and a touring career as Satan and Adam. As that career opened up, the streets faded in importance for both of us. When some kids shot at Mr. Satan with a Super Soaker water rifle one day in 1991, he got disgusted and packed up shop on 125th Street, although we made occasional forays to other locations in the city. He viewed our exile philosophically, as was his way. “When we needed the streets, they were there for us,” he said. “Now that we don’t, they ain’t.”

But the truth is, Harlem’s 125th Street — that five-year gig — was the most extraordinary learning experience a young white blues musician could ever have. As curious a figure as I must have seemed, the people of Harlem made a space for me and gave me a chance to grow into it. I’m thinking in particular of the handful of older men — Mr. Oscar, Mr. Danny, Mr. Larry — who brought chairs and hung out almost every day we were there, basking in our music and watching the street life flow by. They were our cheering section, our amen corner. Their yells of “Throw down!” and “Now you got it!” pushed me to dig deeper and come up with something that said what needed saying. Something that spoke for all of us in that particular moment.

It’s that “us” that I’ll miss. Harlem gave me a chance to learn what it feels like when music does that. That’s a great gift, for which I’ll always be grateful.

Adam Gussow is the subject of the documentary Satan & Adam, directed by V. Scott Balcerek, which is in select theaters from April 12 through Cargo Film & Releasing. Gussow, a professor of English and Southern Studies at the University of Mississippi, is the author of Mister Satan’s Apprentice: A Blues Memoir (1998) and Beyond the Crossroads: The Devil and the Blues Tradition (2017). 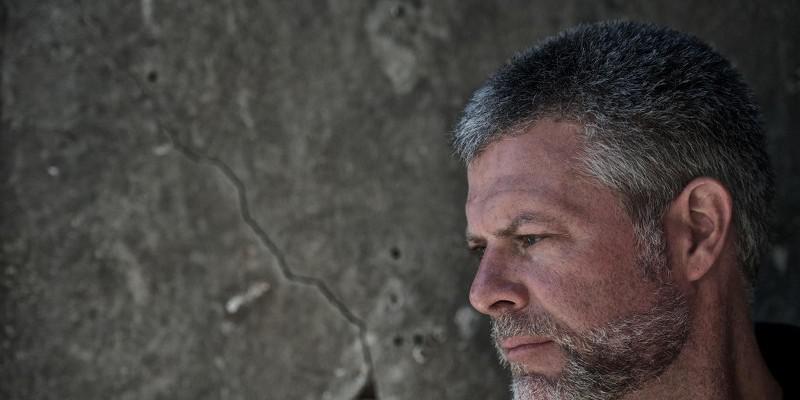