Chicago-based musical collage artist Jessica Risker released her new album, I See You Among The Stars, this spring on Western Vinyl. Comprised of eight aural vignettes, the album is a wood-grained, amber-hued world respectfully orbiting influences like Nick Drake, Sibylle Baier, and the softest moments of Broadcast. There is a perfect thread of quiet despair that renders the playfulness of its surroundings subversive and slightly wicked, making the whole affair psychedelic in the actual sense of the word.

Gig Economy is a Talkhouse series in which artists tell us about their work histories, from part-time pasts to the present tense, in order to demystify the many different paths that can lead to a career as a working musician. Here, Jessica Risker discusses maintaining two simultaneous careers and why “success” is almost always associated with money.
—Annie Fell, Associate Editor, Talkhouse

When I was in college, thinking about my future, I wanted to be a musician. I didn’t want to go through some formal classical music degree program, I just wanted to write and record my own songs. I worked on it; it was hard, I was discouraged, I had a long way to go. I finished college and I didn’t know what to do next. I knew I needed to pay rent and bills. I was good at school, but my philosophy/psychology undergrad degree wasn’t going to take me too far, so I applied to graduate school to be a professional counselor. I got accepted.

It felt like an accomplishment getting accepted, yet it was hard for me to move forward with graduate school, because I wanted to be a musician. Going to grad school felt like I was betraying my music dream—it was a different direction that took up a lot of time and energy. I struggled with that throughout grad school. I’m still paying the student loans, and that in itself felt like a career trap for many years.

But I did it. I moved from small-town Missouri to big-city Chicago, completed the program, and spent the next several years working at non-profit social service agencies in Chicago, a case manager with the homeless population. It was meaningful, difficult work. The music dream stayed strong as ever. While I felt good about my social work day job, I struggled with the time it took away from pursuing my music. I came home after work and wrote songs and went to open mics and put a band together. I met other musicians, became part of the vibrantly creative Chicago music scene, interned at a studio, learned recording techniques. For a time there I barely saw my apartment—just to sleep. Working full time and doing music after hours took a lot of energy, and I was energized. I hustled. I was motivated, and I believed that before you can do any of it in a professional way, you have to get good. I focused on getting good, and to me that meant doing it as much as possible.

Still, I struggled with whether I was truly “meant” to do music, whether I was really giving it my all. I wonder if I’d devoted myself to it completely if I would be in a different place with it all now? But I had to eat and pay rent; I needed the money and the health insurance. Plus, I have student loans to pay for, which forced me into a certain income tier. “Scraping by” occurred at a certain price point just to keep up with everything, which forced me to stay with my job, which I wasn’t sure I wanted anyway. That was difficult to reconcile.

I considered artists pursuing their art while working hard, respectable, physically demanding, lower-paying, insurance-less jobs—baristas, grocery store cashiers, ride-sharing, dog-walking—hoping their art/music/comedy will be the thing that eventually lifts them out of it.

I thought about getting older and wondered: What if you eventually get trapped in an entry-level, minimum-wage, physically demanding job? The hardest jobs are the ones that pay the least. What if you go for a different kind of job and that’s all you have on your resume? What happens then? Like what if I want a family or something? It worried me.

Other questions: Does the fact I’m working a nine-to-five mean I’m not 100% committed to my art? What if my art doesn’t eventually bring me the success I’d like? Why do we automatically connect the word “success” with money? Do I even want to make music with money as an end goal?

There’s a certain relationship between a piece of art and the value others place on it, but a lot of the time it seems pretty arbitrary. I’ve seen first-hand, by watching the many talented people around me, how merit doesn’t necessarily lead to success. And the reverse: success is not always determined by merit. I don’t want to put my songs in commercials, I don’t want to factor what’s trendy and cool as determined by “tastemakers” as I work on a song. I don’t want my music to be overly influenced by pop culture, which is really just influenced by money and clicks and things that don’t really feel that important to me. If I try to make all my money through my music, how would you resist that temptation? If your rent depends on your next album, that’s gonna cut through—you can’t help but think about that stuff.

Right? Am I kidding myself? I have a counseling practice, I’m good at it, and it financially provides for me and it provides something valuable to those who come see me. They are willing to pay for the service, my support, my knowledge and skill. The constant interaction with the work makes me improve, gives me experience. It’s very creative, in its own way. I’ve made peace with the relationship of counseling with making money. Why should it be any different with music?

Two different industries. Two very different paths to getting your foot in the door, to success. Counseling takes training, experience, exams, licensures. I paid for the privilege and got paid along the way. There’s a fairly clear outcome, if you follow the path and are competent enough. Music takes hustling, experience, discipline, work, talent, extra hours, networking. Very little pay along the way and a lot less of a guarantee at the end. Personally, making music takes a lot out of me. I don’t live the healthiest life when I’m working on an album, I’m completely absorbed by it, I have to come up for air for a bit afterwards. While good art feels timeless, pop art feels very at the mercy of trends and clicks. Counseling, the relationship of connecting with others and supporting them, feels timeless, and so I don’t feel my work there is based on trends. But I dunno—I have to think through this particular thread further. That’s where I am today.

When I work as a therapist, this other source of income, I’m free. I’m free to make what music I want. And it doesn’t mean I’m not interested in success. I can be interested, driven towards success, without being desperate for it. It doesn’t mean I ignore feedback or that I’m not trying to connect with others, but I’m not at their mercy. I want to be heard, but I want to be true to myself and creative exploration and these values. Basing an income off this endeavor would put me too much at the mercy of these outside factors that I think, frankly, are bullshit and counter to the spirit of creative artwork. Unless you’re making a statement on these very things, of course.

I asked the questions. There’s a lot of questions, and many of their answers conflict with one another. I think them through, I talk with friends and family, I clarify my vision. I make albums, I perform, I meet people, I grow. I go through an album release cycle and grapple with the excitement, disappointment, reviews, play counts, comparisons, and ask myself why I’m really doing this. I consider what “success” means for me. That’s an important question. If you don’t think about that, you’re chasing something very fuzzy and vague, and how do you know when you get there? I decide, yet again, no matter what, I want to be a musical artist. I want to grow and create good, strong albums, and for them to be heard. In order to do that, I know I need a certain amount of free time, a home base, and financial stability.

I begin to accept my “day job” as a necessity to my survival and my music, while consciously shaping my day jobs to support my music. Every decision I’ve made, and every decision I continue to make, is made with the question: Does it support my music, or will it limit it? Will [this job, this apartment, this relationship, this baby] continue to allow me to work on my songs, my albums, performances? If yes, move forward. If no, choose again.

Thus, I keep music a priority in my life. I pay rent and eat. And my music career has grown, slowly but surely.

At this point in my life, I don’t consider myself having a “day job” while being a musical artist. I see myself as having two careers, a counseling career and a music career. Who says you just need one? They play off each other. Both careers require their own type of attention, inspiration, and energy. Like the different types of music I create, having different professional endeavors allows me to approach the other with a fresh perspective.

I will never be able to give up music—the creative output gives my life meaning in a way nothing else does. The artistic freedom I enjoy keeps my music liberated, and yet I never stop aiming to grow my ability and reach with my music. It took me a while to get here, and will continue to take active nurturing to maintain and adapt and grow, especially as I’m about to have a baby, complicating things further. But I feel very lucky and grateful, and I look forward to getting better and better at it all. It all informs my music, and it’s very meaningful unto itself. And isn’t that the point?

Chicago-based musical collage artist Jessica Risker released her new album, I See You Among The Stars, this spring on Western Vinyl. Comprised of eight aural vignettes, the album is a wood-grained, amber-hued world respectfully orbiting influences like Nick Drake, Sibylle Baier, and the softest moments of Broadcast. There is a perfect thread of quiet despair that renders the playfulness of its surroundings subversive and slightly wicked, making the whole affair psychedelic in the actual sense of the word. 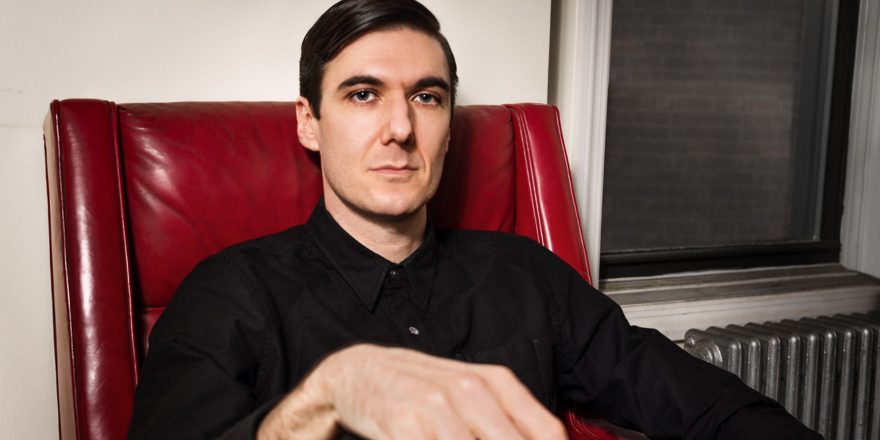 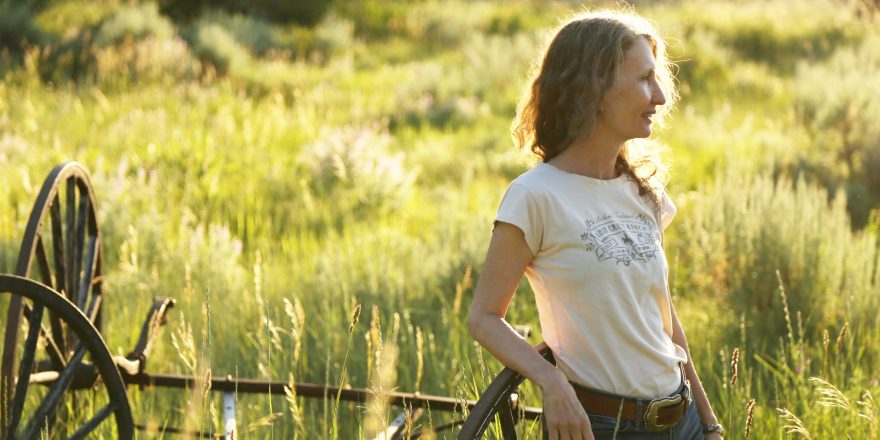