I have often wondered if the emotional state of a filmmaker and their team always leaves some kind of residue behind in the finished film, especially in documentary; in the movement of the camera, the pacing, the tenor of the conversations onscreen. Perhaps this artifact can be something even more nebulous, just a feeling, some palpable sense of joy or sadness throughout the film. (I’ve heard this is the case in Roar, that the film crew’s tension over being stalked by Big Cats all day, every day, far overshadows the intention to advocate for exotic pet ownership.) While making my second feature, This Time Next Year, about a New Jersey barrier island community in the 12 months after Hurricane Sandy, I thought about practical ways to mold this energy, insisting on a very open production schedule, to leave time to commune with the ocean and match the headspace of our subjects, not just because that gave space to capture the unexpected moments rewarded only to the patient, but because I hoped the film could become imbued with a sense of a people and place beyond their words and geography.

I don’t mention this particular fixation often because it is all too easy to devolve into talk about “good vibes, man,” and I worry I sound like a new-age ass-hat, but I believe in this intangible, inexplicable quality — and I believe that most Maysles films have it — that being able to somehow feel the mood of the filmmakers is an essential part of their work’s enduring charm and depth. Although it is usually attributed to other factors — a rapport with the subject, or the quietly subversive appearances of the directors on screen — I think that there is something greater than the sum of these parts. If, in Grey Gardens, one of Albert Maysles’ best known films, that feeling is nostalgia, in Iris, one of his last, it is something close to glee.

The subject of the film is nonagenarian Iris Apfel, a “geriatric starlet” — self-described, if stolen from a newspaper review of the Metropolitan Museum of Art exhibit of clothing and accessories that rebooted her unlikely fame — best known for her stunning wardrobe and original, DGAF style. Maysles delves into Apfel’s vibrant, rebellious aesthetic to find the impish, confident spirit that it was designed to express. Simply put, Iris brings joy into the world; she is witty, curious, kind, blunt, brave. So many fashion magazines espouse her essential philosophy about the artistry of making the internal external with materials whose main purpose is simply to cover the human body, but it can often come across as condescending or socioeconomically tone-deaf. Iris, on the other hand, makes you believe this idea, and the fact that fashion is for everyone, in a way that perhaps an issue of Vogue or Goop newsletter suggesting you need to spend hundreds of dollars to buy the perfect striped boatneck does not.

Of course, the mercurial thing about approval is that once you stop needing it, it starts beating down your door. Fashion world luminaries now also worship at the altar of Iris. Part of what makes her art possible is the financial success from her appearances and the successful textile business she runs with her beloved husband Carl. (After all, I don’t believe there are grants out there for people who consider themselves canvases to be dressed with haute couture.) However, one gets the sense from Iris that the money is welcome but not entirely necessary. She is delighted by the little things; finding the right button, neighborhood thrifting, bargaining with shopkeepers. It is not the cost of the item but the pursuit, and the possibility for play that is opened up with every hard-won piece.

Despite a closet full of fur and brocade and sequins up the wazoo, Iris still goes Chinatown bling-hat shopping with Carl, reminding us that she essentially takes readily available materials to create art that is both complex and very accessible. How entirely understandable that Al Maysles would find a muse in her, and that the two would delight in each other’s company in a way that is visible onscreen. If what Iris does is take modest, everyday things like cloth, buttons, zippers, and put them together in ways that reflect something larger about herself and the world around her, then Maysles does the same with life’s humble yet telling moments, moments other directors might overlook because they are difficult to fit with a more traditional sense of narrative.

Although the work of the Maysles has become part of the documentary canon, the filmmakers were often about as interested in tradition or convention as Iris is — which is to say, not at all — gently bucking expectations with their choices in cinematography and editing. For example, just as he and his collaborators did in Grey Gardens, here too Al Maysles pulls off that nifty trick of subtly, elegantly acknowledging his own presence and involvement in the story without making it all about him. It comes organically, like when Iris asks Al for his opinion, or puts him on camera to affectionately point out his handsomeness. Rather than cut these moments out of the film, or do the opposite and draw attention to them in an unnatural way, Al and his editors simply let them be.

As a result, the viewer is invited into the friendship between Al and Iris, and reminded that we are looking through his lens, his perception of events. We know that all those good vibes, man, come not only from Iris having a grand old time, but also from Albert having one right along with her. Without his occasional presence onscreen, this would perhaps still be felt, but would likely be far harder to pinpoint. Although I did not know Al Maysles personally, there is a feeling one gets while watching this film that, just like Iris, he has created art that is an authentic reflection of who he is. That feeling is intimate and refreshing and wonderfully strange, like meeting someone who immediately talks to you as if you are already friends. 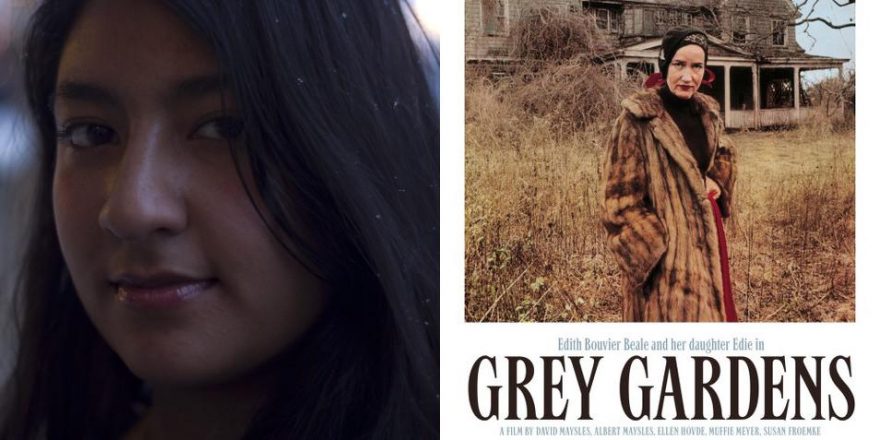