A graduate of USC’s Master of Professional Writing program, Autumn McAlpin is a filmmaker and owner of Side Gig Productions; her debut feature as writer-director, Miss Arizona, is in select theaters from July 12 through Cinedigm. She recently co-wrote and produced the feature film, Waffle Street, starring James Lafferty and Danny Glover, which won several awards on the festival circuit and is now available worldwide on Netflix, DVD and VOD. She has also directed two award-winning short films, PSA campaigns, and has two other feature films in development. The former actress and model is the author of Real World 101: A Survival Guide to Life After High School, and Autumn worked for several years as a columnist for The Orange County Register, writing about the chaos and conundrums of life as a mother of four. Beyond creative storytelling, Autumn runs the nonprofit Aspire Higher, which connects south Orange County families to volunteerism causes, and she actively supports Operation Underground Railroad and Welcome Inn.

You know how you have that one project? That one film, book, song, play, creative goal that only you can shoot, write, sing, perform, do? The one you protect like a linebacker, unwilling to option away or pitch or sell its rights unless you are the creator/singer/performer? It is the reason you wake up. The reason you breathe. It is yours. It is you.

I had that project. Have it. It will never not be mine.

It appeared in 2010. I was drowning in babies. Well, kids at this point. I had four of them, ages three to 10. Me! The second oldest of eight children from Memphis, Tennessee, who swore I’d never have kids of my own because I was done babysitting. I had stuff to do – like grad degrees, studies abroad, a career in journalism or as a novelist somewhere that involved the West Coast. I wanted a life with a convertible and frequent flier miles, and definitely not one that involved kids.

Yet life happened, and here I was. A married mother of four who refused the minivan but found herself writing a humor column about parenthood and dabbling in screenwriting and daydreaming. In a good week, I could eke out four solid hours on Final Draft if I was willing to hide in my car in the garage. Of course … like all parents, I adore my kids. They are perfect beings who remind me of all the ways I’m imperfect and thus unworthy of the gift that is them. But in 2010, I existed in a dark fog of counter clutter and forgetting everything, fueled by Diet Dr. Pepper and guilt. You had them, that means they’re all yours. Keep them alive. I kept a bottle of Xanax hidden in my glove compartment because the doctor assured me just knowing it was there would stop the panic attacks, though I’d learned the hard way that even half a Xanax made me want to crash into a tree so I could go to the hospital and sleep.

We didn’t see that coming. We didn’t agree that was a wise choice. We didn’t know what to say to his wife and daughter.

I didn’t know you could do that.

Here I had given up or postponed all the things I thought would fill my twenties to raise little people. And here, someone I knew and loved had left his little person to live like a 20something.

So I wrote about it. For three weeks straight, I wrote and wrote and three weeks later, I had a screenplay that I tucked into a drawer, confident it was drivel because it hadn’t been outlined and note-carded like everything else I had ever written. A Few Minor Distractions was the story of Megan Lang – a rising musician who left her career to raise kids, and her brother Joey, who left his kid to pursue music. Their paths converge for a week as they challenge each other with all the tough questions: Can you have it all? Can parents pursue their passions? Once you’ve started down one path, can you turn back? Every question – mine, every bit my truth, except the music bit. (People pay me not to sing.)

But primarily: can a mother of four be a film director, too?

One month later, I took out the script and read it to my husband. When I flipped to Megan Lang’s final monologue on page 106, my body burned. My toes tingled. It was the best thing I had ever written. It was honest. It was mine. And I knew that someday I’d see it on-screen.

Soon after, my youngest went to kindergarten – the golden year. I kept my pledge to myself and went back to school, getting a master’s degree from USC, emphasis: screenwriting. After a couple more years, short films, and my first feature writing/producing credit under my belt (Waffle Street, 2015), I sent out A Few Minor Distractions – with the caveat that only I could direct it.

It connected with producers and more than one company was willing to put up the $3-5 million for my beloved indie drama. It didn’t seem right, for a first-time director to skip from “make three to five short films” to “make your first feature for $3-5 million.” But I was seeing the write what you know adage connect.

Of course, they wanted an A-lister to star. And, of course, this being my passion project, I wanted my Megan to be an actual singer, maybe not an A-lister just yet, and preferably a mother herself. The convergence of our casting goals stalled things a bit. Such is Hollywood.

The film had still not gotten off the ground by fall 2016, a time of political fervor and fears aplenty. Like many, I was baffled that a reality TV star was running for leader of the free world, and angered by the good ol’ boys’ club pardoning of vitriolic diatribes against women accosting the airwaves. I’d been volunteering at a women’s shelter whose residents were fleeing various forms of abuse, and their realities – combined with an election night spent at a drag show in West Hollywood for cathartic release – sparked an idea for a new screenplay. Miss Arizona was born. The pitch: A former pageant queen embarks on an all-night adventure with four unlikely friends she meets while volunteering at a women’s shelter. The reality: in the carpool pick-up line, I had met too many Miss Arizonas, who surrendered their dreams to flounder in their “breadwinner’s” shadows for the sake of the children. Oh, please don’t let me turn into Miss Arizona.

This script also wrote itself in three weeks, was put in a drawer, and resurfaced a couple months later to meet more than one producer ready to roll. But this time, our budget was smaller, the schedule more manageable at just 14 days. We could shoot locally, use my sister’s truck, my friend’s house, my favorite crew from USC. My husband volunteered to drive the trailer and make Starbucks runs. I banded together with producer DeAnna Cooper and we pacted in our invisible yet very present pink hats to flip the ratio and hire a phenomenal cast and crew that were 70 percent female.

Seven months later, we found the funds to greenlight ourselves and we did.

I flew my sister-in-law out to watch my four kids for a month so I could charge freely through L.A. with only minimal guilt, and we made Miss Arizona. Less than one year after I’d finished the script, we’d submitted a completed film (OK, minus final color, sound, score, vfx…) to festivals. It was such a whirlwind, it sometimes seems like the film made itself. My baby was ready to be born.

We premiered at Geena Davis’ Bentonville Film Fest, a very deliberate move as the fest lauds inclusion stories. We thus lauded this fest, which lauded us in return with the Audience Award for Best Feature. I gave the most shocked (and embarrassing) speech ever in front of a room that included Meg Ryan, Martina McBride and Ms. Geena herself. Oh well. (But we won!)

And now, we are prepping for a theatrical and streaming release of my directorial debut, Miss Arizona, on July 12. Pinch me.

While doing film festivals, at each Q&A the last question always seems to be, “What’s next?” When it’s my turn to answer, I spew out sound bytes for my true story sports drama and medieval TV show and road trip comedy, all the while keeping my flame, A Few Minor Distractions, simmering quietly in my heart – knowing I will make it someday, whether it’s the next thing, best thing or last thing I ever make. And part of me wonders if I even need to make it anymore, because maybe, part of me wonders if I just did.

A graduate of USC’s Master of Professional Writing program, Autumn McAlpin is a filmmaker and owner of Side Gig Productions; her debut feature as writer-director, Miss Arizona, is in select theaters from July 12 through Cinedigm. She recently co-wrote and produced the feature film, Waffle Street, starring James Lafferty and Danny Glover, which won several awards on the festival circuit and is now available worldwide on Netflix, DVD and VOD. She has also directed two award-winning short films, PSA campaigns, and has two other feature films in development. The former actress and model is the author of Real World 101: A Survival Guide to Life After High School, and Autumn worked for several years as a columnist for The Orange County Register, writing about the chaos and conundrums of life as a mother of four. Beyond creative storytelling, Autumn runs the nonprofit Aspire Higher, which connects south Orange County families to volunteerism causes, and she actively supports Operation Underground Railroad and Welcome Inn. 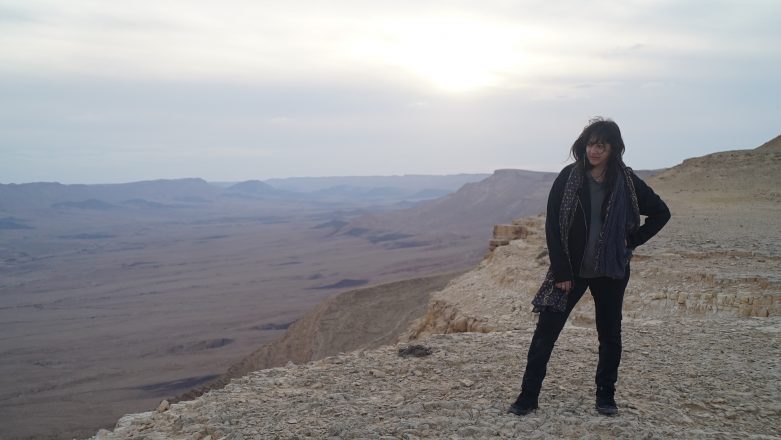 Bring on the Next Wave of Female Auteurs