“Come, sorrow, we welcome thee” are the first five words spoken in Barry Sonnenfeld’s Addams Family Values, a piece of work that is such a product of its specific moment in time that for all intents and purposes it might as well have been made on another planet.

Movies and television were separate things in the ’90s, to the degree that shooting a feature film that looked and felt like a sitcom – like 1995’s The Brady Bunch Movie – felt like an intentional aesthetic decision and not an absence of taste and craft. The first Addams Family movie, released in 1991, had been a surprise success – produced for an estimated $38 million and grossing almost three times that domestically. On paper, it had everything going for it that most run-of-the-mill studio movies do today – a reliable time-tested brand for its source material, an A-list cast and a marketing campaign that included video games, cereal, cartoons, and more. But the film’s most striking characteristic (beyond its Tim-Burton-y embrace of Hammer horror doom-and-gloom in the service of comedy) was its mean streak. Charles Addams’ New Yorker cartoons and the short-lived ’60s sitcom based on them were defined by a gallows humor, for sure, but Addamses of the ’90s made so many casual references (essentially implicit confessions) to torture, deviant sex and all varieties of murder that the off-screen antics of the main characters are far more extreme than the film’s PG ratings would imply.

The Addams Family did so well that a sequel turned up two years later, about as hot-on-the-heels of the original as could be conceivable for a major studio, and its tone and structure follow the original so closely that it plays more like a subsequent episode of a TV series than the narrative continuation of a feature-film franchise. Values repeats what worked best in its predecessor, but pushes it further. The aesthetic is exaggerated, the one-liners are nastier, and the family’s outsider status is more sharply delineated and thoroughly explored. In the movie, the family doesn’t just exist on the outskirts of normal society, they actively seek to destroy it. Their otherness allows them to do what we cannot. “Real America” is depicted as a nightmare world of pastels and forced smiles. In contrast, the Addamses are gaunt, black-haired and death-obsessed – not just in touch with their moroseness, but defined by it. I saw this movie in the theater when I was 11 years old, and I loved it with all my heart.

Here is the actual plot of Addams Family Values: Gomez and Morticia have a new baby and Wednesday and Pugsley are jealous, so they repeatedly try to murder it. In an effort to get them out of the house, the children are sent to a summer camp, overseen by an overly chipper couple and overrun by a snotty swarm of little Aryan princesses, which they violently and successfully overthrow. Meanwhile, the baby gets a new nanny, who is also an Aryan princess, and secretly a murderer who is after Uncle Fester’s fortune. She seduces him and tries to murder him several times, and when that doesn’t work, she tries to murder the entire family. The day is saved when the baby escapes its crib, makes its way through a Rube Goldberg-style series of circumstances and murders the nanny, to everyone’s glee.

Rewatching Addams Family Values almost a quarter of a century later, I can think of very few works of art, let alone movies, let alone studio movies, that celebrate crime and aberrant sexual behavior to this degree, and in doing so use the indulgence of humanity’s basest desires as a metaphor for truth-telling and liberation. Jean Genet, the Marquis de Sade, the early work of John Waters, and the Cinema of Transgression are the only things that immediately jump to mind. As a filmmaker who hopes to keep creating work on increasingly large scales without losing the outré elements that make them personal, I can’t allow myself to believe the inflated budget and kiddie-friendly marketing behind the Addams Family movies discount their subversiveness. “If the Americans … want to regard these films purely as comedies and are content to stay within the facile and comic bounds of the definition of humor, so be it,” Theater of Cruelty inventor Antonin Artaud wrote about the Marx Brothers, “but that should not prevent us from considering the climax of Monkey Business as a hymn to anarchy and full scale revolution …” I’m right there with you, Tony.

Looking back, the box-office failure of Addams Family Values (it grossed $49 million, less than half of the original film) may have well been the death knell for large-scale macabre comedies. (Studio execs are so fickle!) Sonnenfeld never returned to this material, either thematically or aesthetically. Even Tim Burton, the dark prince of Hollywood, only got away with one more personal project – 1994’s Ed Wood – before allowing his style and ethos to be increasingly eroded in the service of studio product. Addams Family Values might not be considered a classic by most people’s standards, but it remains one to me, both the product of a bygone era and, to steal a couple lines from the movie, a heartfelt celebration of “the unholy maggots which feast in the darkest recesses of the human soul” wrapped up in a “gossamer blanket of ecstasy.” 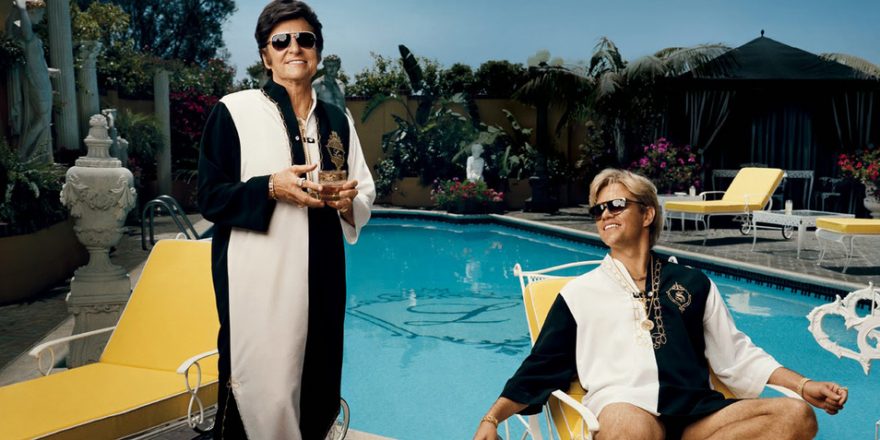 Expiring Soon: Behind the Candelabra, and My Love Affair with Liberace and Las Vegas

Expiring Soon: My Own Movie is Leaving the Infinite Shelves of the Internet’s Video Store