Ah, they’re such magical things — the whipping boys of all future double chins (look it up). Most of us spend our lives with our heads angled down, glued to our devices, our faces basking in the glow of impulsive purchases of Acai powder and Butt Club insignia rings, prominent and not-so-prominent news updates, Kanye meltdown tweets, etc. But I’m not here to pass judgment on cellphone addiction. Not at all. My head would be first on the chopping block. No, I’m here to talk about cellphones’ unhappy shotgun wedding with concert-going.

Here’s a list, in no particular order, of the show etiquette “no-no’s” that I’ve encountered during my more than seven decades in the indie rock “biz.” If I’ve left anything out, (fellow music players) let me know.

DON’T…wield a cellphone like it’s a viewfinder into another dimensional plane of existence and you’re the lone gatekeeper documenting the magic.

As uniformly uninspiring as it is to be on stage and witness a sea of blank, unexpressive, illuminated faces watching a show through their brightly glowing cellphones, what can you do, really? I know many artists who don’t allow phones — or shame audience members who use them — and I can completely understand the sentiment.

Yes, when you use your phone during a show, it stinks for the performer. And, yes, it takes others out of the moment. And, yes, I do have a tendency to grab phones out of people’s hands and lick them. And yes, I have gotten terribly sick on tour because of this. And yes, yes, yes, I know it’s entirely my fault and why the fuck was I licking a stranger’s cellphone in the first place? They bring that thing into the bathroom with them. Ugh, I’m so stupid.

Solutions for the band: Play an engaging show that forces people to be in the moment? Don’t lick phones? Don’t scold the audience? Be happy that that terrible-sounding and shaky footage of your band will forever be online for no one to see? Sure, these are all solutions, I guess, and if it sounds like I’m defending the cellphone sea, I’m most certainly not! All I ask — I implore, I beg of you — is that as an audience member, have some self-awareness about how annoying your cellphone documenting may be to other people around you and to the performers themselves. It can be a real drag. Conversely, I’ve also been to many shows where no one is filming and photo-taking is kept to a polite minimum. And, no, these shows did not take place at nursing homes, but surprisingly, at warehouses, art spaces and smaller music venues teeming with twentysomethings. Maybe it’s contagious?! Maybe there’s hope!?

Nope. There is no hope. Take a picture. Take a video. I do these things, too. Now…put your fucking phone in your pocket. Enjoy the show. Do what you want. Just be careful and…

DON’T…become someone else’s shaky cinematographer for the entire show!

This is the worst. Don’t be the worst. No one behind you wants to watch the stage through your cinematic eye. If they do, marry them. There’s not much more to say about that one. It all comes down to having respect for the people around you. And if you don’t, don’t be surprised if you catch a random elbow in the back. Mr. Marky Ramone actually came up with a pretty effective remedy for all of those of you stuck behind a cellphone offender. See above.

I was reminded of this little gem by my bloom from another womb (I promise never ever to use that one again), Rebecca Cole of Minders/Wild Flag. Luckily, I haven’t seen much of this — it usually only happens at shows during which I’ve had to open for a band whose audience detests every second they have to endure of my dumb face singing stuff they don’t care about. Nothing screams “I don’t want you to be here” more than an audience member leaning an elbow on the stage and scrolling through their Facebook feed or reading an article about the ins and outs of achieving the perfect razor-cut bangs.

I remember when my band played an Alternative Press event at SXSW (cue sepia toned lights, nostalgic music and exit signs). The audience was filled with music fans who didn’t appreciate our lack of hair products. I had to strut around stage the entire time like a grumpy neighbor telling kids to get off his lawn, kicking at all the free AP magazines that audience members had rested near my feet so they could flip through the pictures of perfectly coifed bands. What are magazines you may ask? Proto-cellular phones.

Here’s a suggestion for you, attention-lacking audience member: If you’re bored and you don’t wanna lose the sacred center spot that you sprinted towards all willy-nilly once doors opened, then find entertainment in what you can’t stand about the band and mentally compose your future hate blog post/tweet/whatever. Really study, analyze and digest your disgust.

And if/when that itching, squirmy temptation to check your Instagram feed finally worms its way into your fingertips, be prepared for the slight possibility that a filthy, grown-man tongue may be lurking just out of your eye line getting ready to lacquer your screen with cooties. Ugh. No Bueno!

Dude, Be Cool: Here’s How NOT to Hurt People at Shows 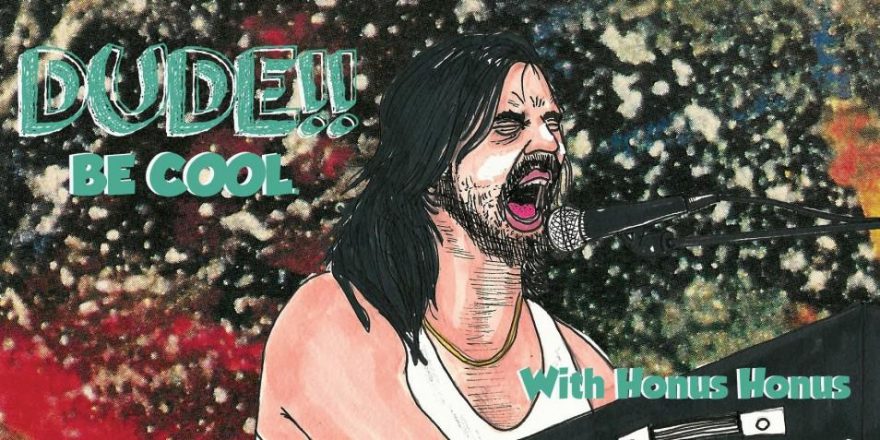 Dude, Be Cool: Here’s How NOT To Make a Band Hate You

Beats & Treats: Anthrax’s For All Kings Becomes a Heavenly Frito Pie with a Hellish Kick

Hot Love: How to Find Love Without Tinder — and Which Smiths Song to Listen to While Doing So