I’m not your typical Xiu Xiu listener — my musical tastes skew towards artists that can temporarily quell my simmering anxiety rather than dredge it up and force me to examine it. Fripp and Eno’s ambient masterpiece Evening Star has probably gotten more rotations on my turntable than any other LP, along with stuff like David Crosby’s If I Could Only Remember My Name and Dion’s oceanic Born to Be with You. What can I say, usually I want to feel like I’m getting into a hot bath when the needle drops.

But I think this makes me the perfect foil for Xiu Xiu’s fractured, shrieking non-pop. Take my dad-rock predilections, Xiu Xiu leader Jamie Stewart, and twist their nipples until they bleed. Make me feel uncomfortable, then make me feel uncomfortable for feeling uncomfortable, then delight me as I realize that this is part of the point. Show me something revolting and make me wonder if it illustrates a quality common to all human beings and if therefore my revulsion is just a form of shame. And when I least expect it, part the clouds and show me some beauty.

This is a record about fucking — not sex, fucking.

At the risk of sounding pretentious, I’d compare the records I’ve made to constructions, dioramas, maybe. I shape them with sound, place characters and objects throughout and paint around the edges with colors that I think will highlight the beauty of the constituents. They’e sonic-engineering experiments that elicit a strong emotional response in me and that I hope will do the same for others. This Xiu Xiu record, on the other hand, is like looking at one of these dioramas and having someone come up behind you and stick their dick in your ear. You don’t participate with it, it participates with you — it goes against most of the things I have come to believe about the process of music. And I really love that.

So yes, Angel Guts: Red Classroom is about fucking, but it’s also about control, possession and even love. On the penultimate track Stewart, or the man from the film, bemoans that “there was no way to save your wasted flower of youth.” The starlet is scarred forever. She has been raped and cannot be unraped. This is the source of his anger and passion. This is also the source of his desire and his shame.

The album opens with three and a half stark minutes of windy static hard-panned to the right, like a TV tuned to a dead channel or a seashell pressed too hard to the ear. Credits roll across your mind’s eye. It’s a spacious, cinematic moment loaded with foreboding. It’s also sonically indicative and emotionally preparatory for what’s to come: a stereoscopic assault.

Clearly this isn’t The Sounds of Silence, but it’s not Metal Machine Music either. The album wants to be listened to; the songs are short and the hooks are there, albeit unconventionally. It also sounds really good. The panning is aggressive; it has a super-widescreen stereo image, making it an interesting headphone listen. I also love the low end, even if I can’t tell exactly where it’s coming from. It’s a fairly heavily compressed record, but necessarily so — had Xiu Xiu leader Stewart and producer John Congleton opted for a lo-fi, distant approach, the record would have washed over me unnoticed. It’s also compositionally dynamic and Stewart uses space like someone with a dozen or so records under his belt; you never get the impression that synths or guitars were ever blindly overdubbed out of habit.

The sequencing is also unusual: the powerful, disaffecting pop gem “Bitter Melon” is preceded by nine tracks of aggression and dissonance. It’s the centerpiece of the album and, to me, a really haunting song; Trent Reznor and Suicide spring to mind. Man, do I love the sound of an old drum machine with the rhumba button pressed! It’s like the sun coming out. It’s a well-timed respite from the unsettling tracks that precede it, though relatively so — it still features an instrumental section which can best be described as a “grunting solo.” Stewart’s quivering, pinched vocal delivery communicates relief and ecstasy when he rejoices that “When I’m near you, everything everything everything is worth its cost.” There may be no going back from trauma, but there is hope in human connection.

On the other end of the spectrum is the apoplectic freak-out “Black Dick.” The chorus is the song title, repeated; the verses are clinical dissections of the human sexual anatomy married with alternately sinister and absurd imagery: “There are titties on the bureau/One nipple a volcano on fire, the other nipple, baking soda/Put it out.”

Equally unnerving and, I have to admit, hilarious is the carnal “Adult Friends.” It’s telling that one of the first concretely identifiable sounds on the record is that of a squealing pig apparently being led to slaughter — this isn’t a band in a studio, this is a performance artist and the studio is his medium. Stewart is role-playing here, wearing the skin of a deeply disturbed and delusional sex-addict: “You reduced your breasts to a more tasteful size D/When I kiss them it’s like a lobster crawling out of my eye.” The bizarre lyrics aren’t what’s disturbing, though — it’s the unsettling assertion that some form of these uncontrollable and perverted desires lie dormant within us all. 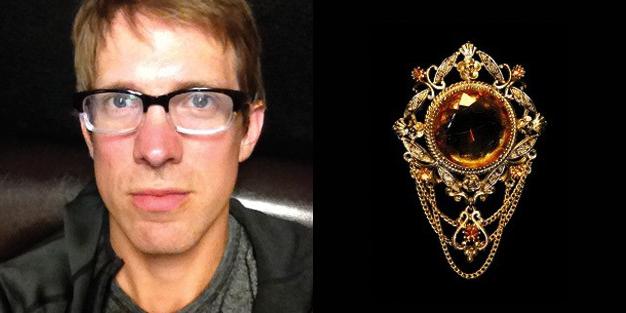