Swet Shop Boys consists of the rappers Heems (Himanshu Suri) and Riz MC (Rizwad Ahmed) and the producer Redinho (Tom Calvert). Their music is a prayer for and statement about the bodies of the diaspora, and against a monolithic global culture first informed by whiteness.

Heems, a native New Yorker born to immigrant parents from India, and Riz MC, born in the UK to Pakistani parents, met as Twitter friends. When Riz was researching for a role as a South Asian cab driver, he hit up Heems, whose father is a cab driver in NYC. Swet Shop Boys became their natural response to their connection. They joined forces with Redinho, a UK producer capable of sonically merging their ideas and influences.

Their debut album, Cashmere, was released in 2016, and it surfaced the climate for people who can relate to “threatening” the status quo purely by existing. The personal and the political are often one and the same for many brown people: With lines like, “I’m so fly, bitch / But I’m on a No Fly List / You not fly, shit / Why they let you on like a pilot,” on the song “No Fly List,” and “TSA always wanna bust my bubble / Always get a random check when I rock the stubble” on the track “T5,” Swet Shop Boys put that in perspective.

I was always a big fan of Heems’s former band, Das Racist, whose song “Who’s That? Brooown!” became an anthem for a young girl learning about how her skin’s reaction to the sun differed from the normalcy of whiteness. Now, Heems’s work with Swet Shop Boys is an escalated move towards thinking about the infrastructure that the brown body must interact with. Depending on who is looking at you, third-generation Latinx-Americans are read as undocumented, or Hindi people are stamped as Muslims.

Why does it even matter? Isn’t it just trite identity politics? Well, when you feel it, and you know it is because of institutionalized racism, there is an urge to unravel it all. James Baldwin wrote, “All art is a confession, more or less oblique. All artists, if they are to survive, are forced, to at least tell the whole story; to vomit the anguish up.” Swet Shop Boys’ confessions identify the Venn diagram circles of bodies and power when it comes to brown people. Talkhouse spoke with Heems by phone to discuss how personal experiences are enforced by racist institutions and culture—not just in America, but globally.

VICTORIA RUIZ: Swet Shop Boys includes you—a former member of Das Racist—and Riz MC, who played Bodhi Rook in the most recent Star Wars movie, Rogue One. How does such a cosmic collision take place to begin with?

I spoke with Riz a couple of times, but the first we met, he was doing research about a South Asian cab driver for [a role in] The Night Of, an HBO cine-drama. Inasmuch as a city can represent a community, I thought it was really important to see how that community is made, so I invited him over to get a feel for us and our house.

VICTORIA: How do you deal with the tension of different realities that people of the diaspora face in Swet Shop Boys? Depending on our nationality, our class, our language, there can be conflicting experiences, even though we are bound by diasporic identity.

HEEMS: The project is thinking about things on that larger scale. We wanna tour in these pop-up safe spaces for South Asians to feel safe and feel connected. Riz being from Pakistani descent and myself being from Northern Indian descent means that we have a lot of the same influences. We don’t think of things in terms of Pakistan or India or Britain or New York; we are thinking of things in terms of this larger narrative. This is about me being brown in the world, not just in America—how are brown bodies treated not just here, but across the globe. Part of that is being a Hindu who raps about Islamophobia and thinking of all those layers. There are too many layers to focus on just one. Once we break down those borders that the layers create, there is a freedom.

VICTORIA: As someone who is always trying to make the connections between the diaspora and how capital and resources move in the world, I have to ask about the role of identity in thinking about institutional power for you and Swet Shop Boys?

HEEMS: Identity politics and my personal experiences were my gateway into thinking about institutional power. I needed to understand who I was and what I’m about before I could understand the institutions that were being thrust upon me.

VICTORIA: Is there a message about this in Swet Shop Boys?

HEEMS: The underlying message is [about] when you move [to] a place, and the fear of being moved or sent back, and how it comes down to institutions not caring about people, and a fear of institutions not being able to deal with that contrast. You know, I see Know Your Rights emails being sent to my people; it is like a crashing of activism with our worlds. Das Racist was about how you need to be around brown people, whether Latina or South Asian, and having a say in the conversation on race in America. If you’re brown, you can be read as an immigrant or as being from different religious groups; all this identity is placed on you. It’s easier for them to paint immigration onto our identities. It’s not black nor white, so that middle area is brown. That’s why our crowd feels
this resonance.

VICTORIA: It’s so true—I read an interview in NPR where you spoke to this complexity and said, “You know what was more frustrating for me? Seeing so many Sikh and Hindu people saying ‘I’m not Muslim,’ or separating themselves from Muslims [after September 11]. Or after the Sikh temple shootings, it was, ‘We’re not Muslim, why did this happen?’ As if to say, ‘If we were Muslim it would be understandable.’” It called out the white American baseline so perfectly—even within [communities of] people of color, we deal with so many institutional power dynamics [surrounding] migration, religion, race, and class. What do you think about this as an artist?

HEEMS: It blows the model-minority myth out of the water. I grew up in a working-class background and was thrust into a different class. We are so quick to praise our community as a way to face our racism ourself [that] we erase those stories. It’s even more confusing when I get called “bridge and tunnel” by Indians in India, and that’s all they know of New York. One of the first things within identity politics that taught me about racism was that most Indian immigrants in the ’60s and ’70s had PhDs and masters’ degrees. What I’m trying to do is make sure that engineers and lawyers do their part and know that the Muslim Ban can touch so many people. We face so much, so for Swet Shop Boys, it was about not just looking at specific groups, but across all kinds of groups and our matrices—where we connect—[to] speak to the voice of freedom.

VICTORIA: Do you think that what you are talking to is “breaking” any limits within rap, or do you see what you’re doing as part of the genre?

HEEMS: I don’t know if I’m trying to push any boundaries, it’s just the only way that I’ve known how to express myself creatively. We recorded Cashmere in five days—we had two or three ideas going into it. I was in Palestine for a while, dealing with how to think about my history and future and what was happening with Trump in America. I returned in April [of] last year and we recorded. I had all these thoughts on Palestine and the world, and it went into Swet Shop Boys. I think half of the verses I didn’t write. We are still figuring that process out in the same way we are figuring it all out. For me, rap is about sampling other sounds—this album was Indian. You look at a lot of rappers like Dr. Dre—they sample Indian music. It’s happened before. I explored that with Das Racist and it has really come to be its own sound.

We’ve been very into Qawwali music. We have roots in both rap and Qawwali that are poetic. Redinho is the most talented person in the band—he just went into that world and came back with a bunch of beats. One inspiration was the film Mutiny: Asians Storm British Music, [which is] about South Asians with immigrant parents and the music that came from that. I was introduced to it by a friend from MIT. The idea of making music was always tied to London—the idea of doing it in America— grime, Jamaican diasporic rappers, and South Asian sounds. I realized that a lot of the same type of diasporic music influences were happening in Queens, where sweet 16 DJs were doing the same type of mixtapes [as UK artists] that combined rap, bhangra, Bollywood—all these sounds. This is not about me being from New York or Riz being from the UK. This is about a very global feeling, influence, and connection. 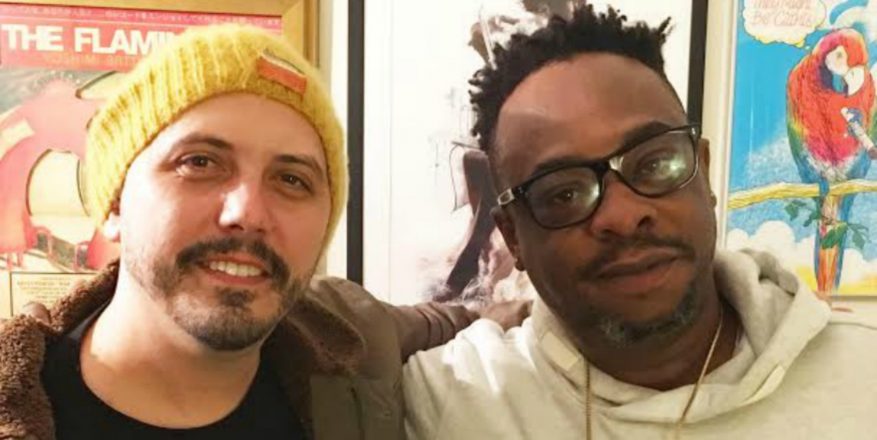