In order to parse The Emperor’s New Clothes, the new Michael Winterbottom film that attempts to articulate comedian Russell Brand’s particular blend of popular performance art and political activism, it’s probably prudent first to ask what exactly is it, the brand of Russell Brand, the Brand brand? With his trademark tight leather pants and skin-fitting peasant tops, his hairy, open-shirted male décolletage, and his oft-cited Christ aspect – the slightly unkempt beard and moustache, the long, wavy hair that looks like it should be more properly adorned with a thorny crown – Brand has the aura of a modern martyr, a perverted Pied Piper, or a slightly lecherous sexual guru whom you might expect to bring spiritual enlightenment to nubile young women through a combination of Tantric sex and proletarian politics. He’s a much better-looking Tiny Tim tiptoeing through the evil tulips of Casino Capitalism, a sexier Jarvis Cocker chasing vulnerable children off the stage as a pedophiliacal Michael Jackson performs “Earth Song” at the Brit Awards.

He’s also a rich movie star disillusioned with his own stardom, uncomfortable as a newly minted member of the entertainment ruling class. (Brand occasionally alludes, somewhat guiltily, to his own membership in the super-elite, but rarely faces its incompatibility with his own avowed politics head-on. His former marriage to pop star Katy Perry, who could be the poster-girl for bland capitalism, remains a mystery.) His screen persona is a combination of louche rock star (Forgetting Sarah Marshall and Get Him to the Greek, both as Aldous Snow; Rock of Ages), lovable Lothario, and Cockney cowboy – someone you’d like to hoist a pint with down at the pub after having accompanied him to an Occupy rally. I have to admit I quite like the guy – or at least the branding – and I admire his activist impulses, which transcend the usual egocentric, deluded and hypocritical political posturing of many celebrities (think jet-setting, yacht-loving, supermodelizing Leo DiCaprio advocating for Green Energy). But does the movie do his various causes justice? Does his first foray into the treacherous territory of personality-driven documentary (beware, Morgan Spurlock and Michael Moore!) cut the mustard?

Well, yes and no. There’s something refreshing and infectious about Brand’s enthusiastic rallying cry for Revolution (also the name of his latest book), particularly since the Occupy Movement seems to have taken a powder. Someone’s got to do what Brand is doing, and he’s probably the logical comedic candidate to take up the mantle of the likes of George Carlin and Lenny Bruce. (Significantly, Brand, like Carlin, publicly eschews the idea of voting based on the belief that the fix is already in, and that anointing a new ruling party only creates cosmetic change, a stance that got Brand in hot water after the disastrous results of the last British general election.) Coming from a working-class background, from Grays, Essex, in the U.K., and without a lot of formal education, this autodidact boldly barges into the vocabulary of leftist rhetoric with gleeful abandon, unconcerned with criticism from a gentrified left, particularly the media, that has long since lost its proletarian, street-smart credentials. His public housing activism, including his participation in protests everywhere from his hometown to, for example, New South Wales in Australia, has more in common with the likes of Canadians Naomi Klein and Avi Lewis than your average entertainer, socialist activists whose books and films are predicated on direct action, dissent, grass-roots organizing, and political intervention. (Interestingly, Brand was recently voted by the readers of Prospect magazine, a politically “contrarian” publication, as the fourth-most influential thinker in the world, right behind Thomas Piketty, Yanis Varoufakis, and Klein. Surprisingly, this trio of contemporary leftist gurus get nary a mention in Brand’s new film; the omission of Piketty is particularly odd considering the fact that his critique of worldwide economic inequality, and his proposed solution – a redistribution of wealth through progressive taxation of the rich – corresponds completely with Brand’s philosophy.)

The privatization of low-rent, affordable housing that has plagued England of late, with two million council flats being sold off in the last several years, is the perfect jumping-off point for The Emperor’s New Clothes and Brand, whose camaraderie with and affection for the proles is highlighted throughout the film in a series of casual, cozy interviews in the homes of working-class people affected by austerity and other neoliberal economic policies. One interview he conducts in particular, with a hard-working, ethical young black woman with cerebral palsy who’s confined to a wheelchair, is particularly powerful; Brand’s empathy and ironic humor only enhance the woman’s dignity and strength, avoiding the pitfall of cloying sentimentality evinced by, say, Michael Moore at the end of Bowling for Columbine, when he entreats a dementia-ridden Charlton Heston to spare the children in full shambling, sad-sack dudgeon.

The pairing of Brand with Michael Winterbottom, the director of The Emperor’s New Clothes – a Lancashire lad whose production company is fittingly called Revolution – seems almost inevitable. Both men worked their way up through television – Winterbottom with a couple of documentaries about Ingmar Bergman and a series of inventive, politically tinged movies about displaced or disadvantaged characters and family dysfunction; Brand was a controversial TV presenter who broke through on MTV and a Big Brother spinoff show, and most recently made waves with his propaganda podcast, The Trews. Both men have played in or made films featuring rock stars and the music world; Winterbottom’s 24 Hour Party People, about the rise of the Manchester music movement, and 9 Songs, a sexually explicit love story set against the backdrop of a series of rock concerts, could almost be regarded as parallel indie iterations of Brand’s Hollywood rock star persona. And most significantly, both artists have moved fluidly back and forth between feature film and documentary-style work. Winterbottom’s trademark blurring of fictional narrative and documentary style, used to such advantage in films like Welcome to Sarajevo, In This World and The Road to Guantanamo, including the use of direct-camera address interviews, historical re-enactments and newsreel footage, make him a perfect fit for Brand’s hybrid project of movie-star-cum-political-activist. It should be noted that Winterbottom also made, along with his co-director of The Road To Guantanamo, Mat Whitecross, a documentary based on Naomi Klein’s book The Shock Doctrine. His unorthodox approach, choosing not to use interviews with professional commentators or scholars, at first alienated Klein, who evidently later reconciled herself with the film. This may go some way toward explaining the absence of such source material in The Emperor’s New Clothes, which is more apt to quote Leonard Cohen than Nick Cohen.

But is the film ultimately effective? I found it more illuminating than annoying, but I have to wonder if its strategy – veering uncomfortably close at times to the pedagogic and the patronizing – is a little tone deaf to the dominant forms of comedy that, for better or worse, currently define the perimeters of humor. Earnestness is a hard sell these days, especially when you have the likes of another Cohen – Sacha Baron – assaulting his audiences with ethically reckless, profoundly disturbing and at times dangerous acts of lunacy that test the limits of the audience. Brand’s attempts in the film to speak directly to corrupt bankers, who won’t let him anywhere near them, are far less successful than Michael Moore’s similar staged events, and nowhere near as gonzo as Baron Cohen’s, whose attempted seduction of Ron Paul in Brüno raised the bar extremely high for this style of radical intervention. (“I couldn’t even shtup Ron Paul” has to be one of the funniest and most cringe-worthy lines of the new millennium.)

The kinder, gentler approach of Winterbottom and Brand is far less anarchic and baroque than Baron Cohen’s, and thereby not nearly as attention-getting, but it does have the inestimable advantage of its charm and sincerity, which is in short order these days. Brand’s interaction, and palpable rapport, with children throughout the film may give the film a slightly didactic feel – a bit of Sesame Street-style proselytizing – but it’s also judiciously targeting the very audience that needs to understand his message the most. The scene in which he fills a bus with 80 black people in a province in Kenya, each wearing a mask of one of the 80 richest people in the world, is inventively shot and politically pointed – a bit of reverse-blackface to illustrate how a small group of mostly white people own more wealth than half the Earth’s population. And although Winterbottom’s use of words and slogans on the screen to illustrate Brand’s message seems a bit soggy, at other times his technique – like making David Cameron, in a speech condemning looters, sound like he’s describing bankers – is spot-on.

Brand’s message – fighting against privatization, union-busting, outsourcing, quantitative easing and other austerity measures – is obviously a central issue of our time, and his call for higher taxation on the wealthiest one percent, for a living wage for everyone and for a break-up of the billionaires’ stranglehold on the media, couldn’t be more timely. But at times, it seems like he has lobbed a softball with his first foray into documentary feature filmmaking. I don’t doubt for a moment, however, that there will be hardballs to follow. 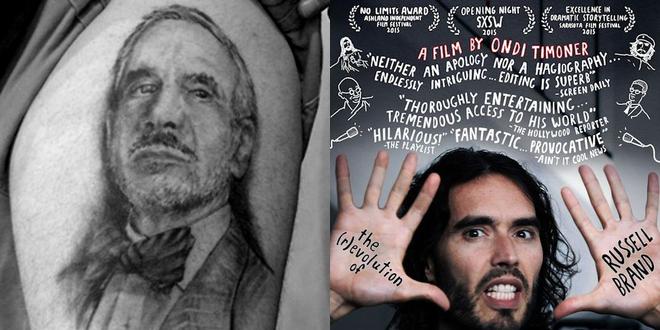