Brian Viglione is the drummer for New York rock band Scarlet Sails and founding member of punk-cabaret duo the Dresden Dolls. Brian collaborated with Trent Reznor on the Nine Inch Nails album Ghosts: I-IV, which was nominated for two Grammy Awards and sold more than 750,000 copies. Brian drummed for Violent Femmes from 2013 to 2015, touring internationally and recording the band’s first material in seventeen years for the Happy New Year EP (2015), and We Can Do Anything (2016) albums.

In 2013, I put together a tribute show to late X-Ray Spex front woman Poly Styrene with an ass-kicking, all-female band and posted our first rehearsal video on YouTube to get the word out. Among kind comments, one particular jab jumped out at me, as it was the first time I’d been directly mocked about this:

To which I quipped:

I hadn’t even considered that it would seem humorous to people, or even a curious aspect of my collaboration history, that I have very clearly worked with many women in the music industry —or that it would seem like a conscious preference on my part. I’ve always worked with artists whose work I’ve enjoyed, regardless of their gender, but I can’t deny that women songwriters have long attracted me on a deep and personal level, and I’ve always felt an ease in working with women, and enjoyed playing a supportive role in the telling of their stories through music. But where did this come from? Is it really that weird that a kid who grew up listening to hardcore punk and heavy metal bands such as Black Flag and Slayer would be later associated with collaborators of a nearly diametrically opposed style? Hell no. Opposites attract. And yet, like-attracts-like. So where the hell do I stand on jamming with the ladies??

Two substantial aspects play into the situation: the first being the ancient and sacred symbiotic exchange of male and female energies, as in the close connection between the dancer and the drummer. It touches a very primal, core part of the sensual side of musical collaboration in the giving and receiving of energy, intention, playfulness, with the call and response dynamic. It’s not even about sexual or romantic attraction. There exists a level of complexity and nuance, sensitivity and subtlety, with feminine energy that is a part of the alchemy of a satisfying collaboration for me.

I’ve long been in touch with both masculine and feminine sides since I was a child, and rather than let myself feel embarrassed for any of it, I chose to embrace it and would often don drag in photo shoots and live shows for and with the Dresden Dolls. It was never a question of sexual orientation for me, though — rather a vehicle for expression of a more flamboyant side and balance for the intensity and aggression I let out on the drums. That always seemed to confound people, as there was a span of roughly ten years where the top suggested Google search result for my name was “brian viglione gay,” followed shortly thereafter, to the dismay of some, by “brian viglione girlfriend” and, ultimately, “brian viglione married.” But too often males in our culture are systematically shamed or directed away from femininity, and likewise females from the masculine, rather than taught a healthy respect for both and the merits of embracing the natural yin and yang spectrum within us all. Therein lies the most potent and exciting potential for creative expression, from what I have experienced.

The second aspect would be my own cocktail of nature vs. nurture elements throughout my childhood. My parents divorced, amicably enough, when I was eight years old. Having a gentle-natured mother as my primary caregiver and role model, coupled with a passionate father who fostered my love of music and drumming — while being given substantial love and support by both to develop a healthy oddball, clownish side to my personality and not give too much of a shit about being teased or occasionally beat on at school — allowed me to feel free to be myself. There was, however, in the darker times of seeing my mother under great duress, a sense of the two of us against the world. I hated seeing either one of my parents in pain, but particularly my mother. From her flowed the guidance, love, nurturing and discipline that gave me security in the world. My mother, too, was the person to first educate me about the many injustices in the world against women in the myriad forms of discrimination through the ages. I mirrored her indignation and from there learned early on that all people are equal and have their own truth to tell, and that prejudice and discrimination in any form only holds humanity back and dims our potential to experience life and love to its fullest as a people.

Granted, I did not, at eight years old, have a sudden awakening and hurl myself, eyes ablaze, into the picket lines of feminist rallies — if any existed in southern New Hampshire in the early 1980s. I was busy toddling back and forth from Greenville Elementary, taking my first stabs at riding my BMX bike off the big jump in the parking lot. But all of this got my young mind thinking about the way we regard women figures, particularly ones in positions of leadership and creativity, and I knew I was on the side to see respect and fair treatment prevail.

Up until I met Amanda Palmer in Halloween of 2000, I had only played in bands with dudes.

Up until I met Amanda Palmer in Halloween of 2000, I had only played in bands with dudes: my best friends from middle school (Countryside Homicide), my first gigging cover band in high school (Green Eggs and Ham), a crust-punk band in Arlington, Massachusetts, (Sic Semper Tyrannis) and a psychedelic rock band in Boston (Asciento) shortly after that. I learned a tremendous amount in each of those bands and felt like brothers with all of those guys. We looked out for one another, laughed, cried, fought, raised hell together, and formed bonds that will last the ages. Like you do. That’s what being in a band with your homeboys is about.

All of this couldn’t have fully prepared me for the very unique setting of working with a wildly creative, free-spirited, aspiring songwriter and performance artist, looking not only to break the proverbial mold, but also sweep the pieces into a canister and send them aloft in a cannon to explode in the sky and rain down on the balding heads of the greater Boston Metro Area — and later the world. Here was a chance to explore chemistry in an entirely new way. Up until then, my role in bands felt purely functional, simple. Suddenly, Amanda and I were presented with a circumstance where each is now playing the other’s muse, and it pulled enormous new dimensions out of the creative process. The Dresden Dolls also made use of our own masculine/feminine dualities and explored it all through music and performance with the same vigor as our heroes David Bowie, Rocky Horror and cabaret stars of the 1930s. But most significant was my chance to connect with disarmingly personal lyrics. I hadn’t ever heard someone write about feeling so disconnected from her father as a child or write with such searing clarity about her own clouded fear of intimacy. These topics opened up a channel within the listener, as well as in me, to process and cleanse our own inner conflicts, and it was cathartic to play along and accompany such powerful emotions with my drums. It was a deeper connection to the music, and to a person who I also felt, like me, needed to heal. That’s not to say that working with woman was just a shortcut to psychotherapy; I felt very much at ease to be myself, not just around Amanda, but most women in general. I like when both men and women just feel comfortable in their own skin, are open-minded individuals with a flair for communicating their perceptions of the world around them.

Life has taken an unexpected, inspiring turn for the better.

So to it’s not that I have necessarily preferred working with women over men, but I have remained open enough to see women as equals and treat people with respect, and that has only broadened the array of songwriters I’ve had the pleasure to collaborate with. In part, I think, because of the way that I naturally relate with women. A colleague of mine, Noelle Picara, once commented, “It’s because you speak to women like actual people, you don’t talk down to women or treat them like they’re incapable. A lot of guys try to pull a superiority dynamic with women around, but you just seem to keep everything on a level playing field.”

Life has taken an unexpected, inspiring turn for the better. Scarlet Sails is the band my wife, Olya, and I formed in 2015. The opportunity to continue to play and tour, with the person who means the most to me and shares that same passion, is a situation I had all but given up on ever manifesting. It truly is a dream come true. For many years, I had heard that it was “harder to be in a band with your significant other than just a regular person,” and I am happy to report that in our case, the difficulties still exist like normal, but the joy and good times are exponentially more abundant. It’s miraculous the growth that occurs when you really learn to listen to someone, and they learn to listen to you, and support and communication are the foundation of the day together. Olya’s songwriting emblemizes the courage, introspection and fight to discover oneself that I admire most in working with women. Hers is a distinctive voice, although one among the chorus of women from countries around the world who lend their strengths to the realm of rock & roll — a form of release, catharsis, of celebration, which, at its core, sets us free to be who we truly are.

Brian Viglione is the drummer for New York rock band Scarlet Sails and founding member of punk-cabaret duo the Dresden Dolls. Brian collaborated with Trent Reznor on the Nine Inch Nails album Ghosts: I-IV, which was nominated for two Grammy Awards and sold more than 750,000 copies. Brian drummed for Violent Femmes from 2013 to 2015, touring internationally and recording the band’s first material in seventeen years for the Happy New Year EP (2015), and We Can Do Anything (2016) albums. 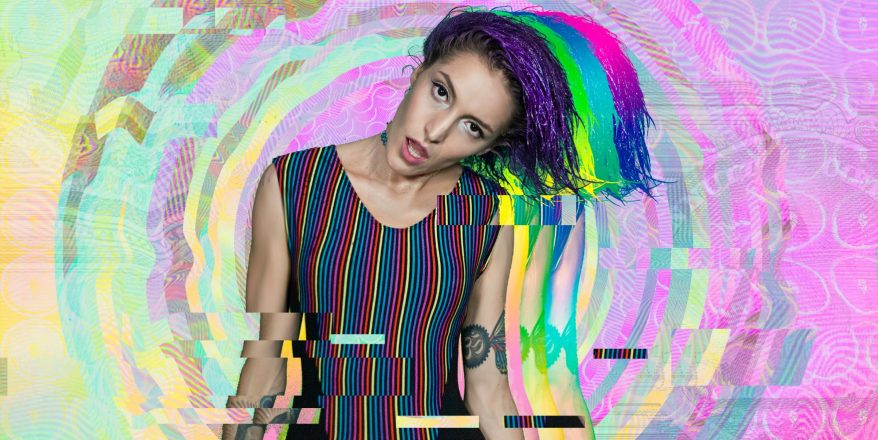 How Performance Art Helped Me Stop Hating My Body