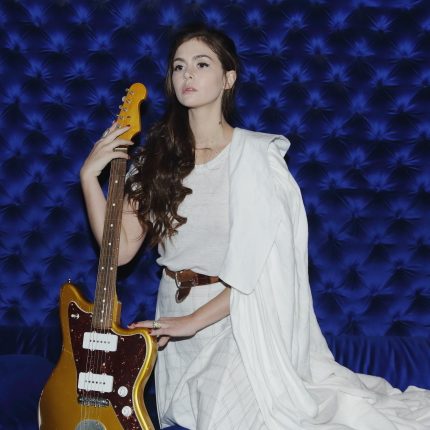 A family of spiritualists, writers and performers generations deep; a home haunted by legends of literature and music; personal upheaval and a sense of being unseated in time: these are the origins of singer, songwriter and multi-instrumentalist Vera Sola.

As a child she played classical piano, later guitar and bass, learning more by instinct than instruction. An obsessive reader and writer, she’d forever written poetry and been fascinated by wordplay, falling in love at a young age with Russian literature and the work of Dylan Thomas, James Joyce, and William Faulkner. All this, along with a career as a stage and voice actor—combined with years of touring in Elvis Perkins’ band—would serve as a launching point for Vera Sola.

But it wasn’t until early 2017, when she booked time at Native Sound Studio in St. Louis, that she began to experiment with the idea of recording her own material. What emerged from the sessions was her debut album, SHADES, a collection of ten finely-honed and immaculately-rendered ballads. Poems and stories delivered in a mannered but casually dismissive style—full of sorrow, yet arch and wry. Songs of the present that conjure the past. Accounts of women and their ghosts: echoes of memories that just won’t quit; of relationships over or current but fleeting; of the extinction of species; the violent capture of a feminine landscape and the spirits that stick around long after; messengers from the other side.

"Stenciled on the top in faded Old English font was her name: The Reaper."