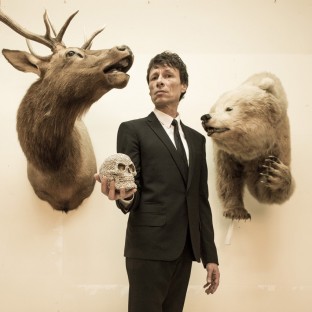 Roland Stephen Taylor (born December 9, 1957) is an American singer, songwriter, and director born in Brawley, California, and reared in Denver, Colorado. Taylor's life took an unusual turn in 1979 when he was first of the 100 chosen, from 20,000 applicants, to spend the summer at John Davidson's summer camp. At the camp, Taylor spent time learning from singers like Tony Orlando, Florence Henderson, and John Davidson. Also that year, Taylor heard one of his biggest influences, The Clash's London Calling. "It saved my life, musically," said Taylor. Taylor recorded a demo of original songs that took the Contemporary Christian music world by surprise. Taylor first began to write for the musical group The Continentals, then recorded his debut solo EP I Want To Be A Clone in 1982 and released it in January, 1983. Taylor quickly gained a reputation as a "controversial" artist, using his lyrical ability to sharply criticize other Christian beliefs and practices that he believed were incompatible with Biblical Christianity. However, his lyrics would also prove to be quite humorous as well. In 1984, Taylor recorded his first full length album, Meltdown with some of the demo material that was not included on Clone plus some new material. His video single of the title track, Meltdown (at Madame Tussaud's) was widely played on MTV, which was unusual for a Christian artist at the time. The video featured an appearance by actress Lisa Whelchel, from NBC's The Facts of Life television series. Taylor followed that release with On The Fritz, produced by Foreigner's Ian McDonald. In 1987, Taylor once again lived up to his controversial reputation with a song called I Blew Up The Clinic Real Good. The song criticizes anyone who claims to be a pro-life activist who would blow up abortion clinics or kill doctors. Like much of his music, it was meant as a satire. Unfortunately, the point of the song was lost on many and resulted in Taylor's album, I Predict 1990, being pulled from the shelves at some Christian record stores. Taylor himself would occasionally call those stores to explain the song to them. Taylor then took a break from music, until 1990 when he returned as the lead singer of Chagall Guevara. The band's first recording was Tale o' the Twister, which appeared on the soundtrack to the 1990 film Pump Up the Volume. The band released their only album, the self titled Chagall Guevara, in 1991 on MCA records that year. A follow up album was begun, but due to label restructuring the band was released from its contract. Taylor returned with another solo album, Squint, and a live CD, Liver, in the mid 1990's. A tribute to Taylor entitled I Predict A Clone was released in 1994, which features performances by Sixpence None The Richer, Fleming and John, Starflyer 59 and others. In the years following those releases, Taylor focused his efforts on running a record label, Squint Entertainment, and producing projects for other artists, including Sixpence None The Richer's self titled 1997 release that featured the hit singles Kiss Me and a cover of The La's There She Goes. Squint Entertainment lost its financial backing in 2001 and Taylor was forced out of the company. He is also noted for his work in production and songwriting with the Newsboys. Taylor is currently working full time as a film maker and has directed music videos for Fleming and John, Rich Mullins, Sixpence None The Richer, Newsboys, Guardian, and two video albums for himself. While still running Squint, Taylor had begun work on a major film project called St. Gimp. That film was abandoned with the company. He has cowritten, coproduced, and directed a film starring Michael W. Smith entitled The Second Chance, released February 17, 2006. Taylor appears in the documentary film Why Should the Devil Have All the Good Music? (released on DVD in 2006), in interview segments and performing part of a song. Read more on Last.fm. User-contributed text is available under the Creative Commons By-SA License; additional terms may apply.

A veteran road dog offers advice to touring musicians about how to keep the home fires burning.