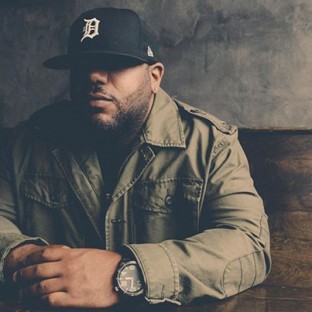 Apollo Brown is a hip-hop producer whose work obscures the line between classic and modern. Hailing from the boom-bap mecca of Detroit, Apollo grew up listening to a variety of musical genres. Citing influences that range from Seals & Crofts to MOP, from Journey to Wu-Tang, he has cultivated a style that’s distinctly his own. Having collaborated with hip-hop stalwarts like Ras Kass, Red Pill, Ugly Heroes, Guilty Simpson, OC, Danny Brown and Kool G Rap, Apollo Brown has gained recognition and respect in the scene through his signature hard-hitting drums and soulful melodies. Follow him on Twitter here.

Apollo Brown is different than most producers. He grew up on the Seals & Crofts—not The Isley Brothers—version of Summer Breeze. Born into a bi-racial family in Grand Rapids, Michigan, his early influences skewed more toward the music of Journey and the Carpenters than the urban genres his peers often cite as inspiration. This is not to say that once hip-hop came into play, Apollo wasn’t all in. Just as easily as he can praise the virtues of yacht rock, the 29-year-old beatsmith can name personal heroes—Gang Starr, Wu-Tang Clan, Mobb Deep, M.O.P., Nas, and Black Moon—from the early 90s period in which, for him, beats and rhymes became life. Apollo began making his own music in 1996 using now-archaic Voyetra audio software, then upgraded to Cool Edit 2000 in becoming a self-described bedroom beat-maker for roughly the next eight years. After graduating from Michigan State University with a degree in business administration, he moved to the west side of Detroit and immersed himself in the local hip-hop community, forming the Black Day in July production crew with high school classmate and Wu-Tang affiliate Bronze Nazareth. When the pair branched off into individual work, Apollo relocated to the east side of the Motor City and continued to build before becoming disenchanted with music and stepping away from production for two years. It was the mid-2000s, and the upstart producer saw no future for his work—work he had dedicated his life to—in an industry where radio was setting a formulaic pattern for mainstream music. But he eventually began to miss the creativity in his craft and began producing once again, releasing the instrumental albums Skilled Trade (2007) and Make Do (2009). Apollo was soon in high demand, collaborating with Detroiters Finale, MaGestiK LeGenD, Danny Brown, Paradime, and Kam Moye aka Supastition. He went on in 2009 to win the Detroit Red Bull Big Tune Championships and competed in the national finals. Apollo then signed as a producer with the Mello Music Group in December of 2009, having left Michigan in late 2007 to take a position as a property inspector in Cleveland, Ohio. A week after signing, he was laid off from his job. “Beautiful,” was Apollo’s reaction, as he viewed the layoff as a blessing and prepared for what he terms his “one-year plan.” Starting things off will be The Reset, a series of reworked tracks in true remix tradition, with new music and arrangements for verses by Rapper Big Pooh of Little Brother, Black Milk, MED, Grap Luva, labelmates Kenn Starr, Oddisee, and Diamond District, along with a host of others. Next up was Brown Study with Boog Brown which features Miz Korona, Invincible, Kam Moye, and Kenn Starr. When the long-awaited Gas Mask LP by The Left with DJ Soko and MC Journalist 103 took the stage in late October 2010 Apollo cemented his place as one of the games best new producers. Then early in 2011 Apollo released his first Mello Music Group instrumental album, Clouds, and dominated best of lists at the end of the year. 2011 also saw the release of the album Daily Bread, with Rochester, New York MC Hassaan Mackey. After taking just under a year off to create a new masterpiece, Apollo released his biggest album to date with the legendary O.C. of D.I.T.C. entitled Trophies. The internet again became abuzz with talk of album of the year. Never one to rest on his laurels, Apollo spent the next 7 months both campaigning for "Trophies" and putting together another album, Dice Game, with Motor City compatriot Guilty Simpson. The result of his intense immersion in his work was yet another year with two albums ("Dice Game" and "Trophies") ending up on people's Best of 2012 lists. Apollo’s credo is simple: “Everything I make, I try to make it my favorite album of all time.” Read more on Last.fm. User-contributed text is available under the Creative Commons By-SA License; additional terms may apply.

On their debut album, these French-Cuban twin sisters sing in English and Yoruba, exploring truths bigger than any one of us, but that unite us all.