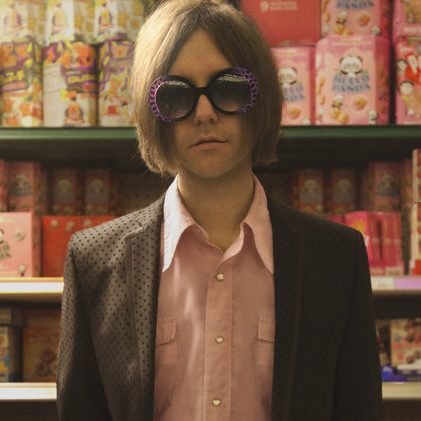 Most people know Aaron Lee Tasjan as one of the wittiest, most offbeat, brilliant, weedsmokin’ & LSD microdosin’ Americana troubadours writing and singing songs today. But steel yourselves, folk fans, because he’s about to follow his restless muse straight out from under the weight of everyone’s expectations into the kind of glammy, jingle-jangle
power-pop- and- psych-tinged sounds he hasn’t dabbled in since his younger days playing lead guitar for a late-period incarnation of The New York Dolls.

Really, the roots of Tasjan’s new record, Karma for Cheap, stretch even deeper, drinking up the sounds of a Southern California childhood spent listening to The Beatles while riding around with his mom at the wheel of their navy blue Volvo station wagon — back to the very first pre-teen year he picked up a six-string and started figuring out all the pretty little chords in those Lennon-McCartney tunes. Back to the pure, blissful unfiltered innocence of falling in love with music for the first time.

Karma for Cheap is Tasjan’s third LP and second for his label New West Records, based in his current hometown of Nashville. The record was co-produced by ALT and his friends Jeff Trott (Stevie Nicks, Liz Phair, Meiko, Joshua Radin) and Gregory Lattimer (Albert Hammond Jr.) and features Aaron Lee’s road band — guitarist Brian Wright,
bassist Tommy Scifres and drummer Seth Earnest — with whom he’s been touring heavily for the last two years.

While the stylistic shift from Tasjan’s palpably stoned ‘70s-country-channeling 2015 debut, In the Blazes, to his more sophisticated, introspective and lushly produced 2016 follow-up, Silver Tears, was relatively incremental, Karma’s rocked-up Brit-pop-influenced Beatles-Bowie-Badfinger vibes underscore a significant departure. The album boldly reimagines these vintage sounds, pushing the boundary of what can be considered Americana. With Karma, Tasjan establishes himself as an artist who not only evolves over time, but isn’t afraid to risk reinventing himself completely from one record to the next.

This makes me happy to see. I love when things change and people break through. Music is such a powerful way to cre… https://t.co/K9XwS1L41G

The friends and collaborators chop it up about MTV, Billie Eilish, and the new DNC record.