Christina Choe‘s debut feature Nancy recently premiered at Sundance in the U.S. Dramatic Competition, where it won the Waldo Salt Best Screenplay Award and was acquired by Samuel Goldwyn Films for theatrical release. Nancy stars Andrea Riseborough, Steve Buscemi, Ann Dowd, John Leguizamo, and J. Smith-Cameron and was included on the Best films of 2018 by Indiewire, The Village Voice and A/V Club. You can pre-order it in iTunes here. Choe’s docu-series Welcome to the DPRK, a personal portrait of North Korea, was also recently acquired and released by Topic Studios/First Look Media, currently streaming online. Her short film I Am John Wayne won the Grand Jury Prize at the Slamdance Film Festival, while her other shorts The Queen and Flow screened at Telluride, SXSW and Aspen, among many others.

I first saw Wanda while I was studying to get my MFA in film directing at Columbia University. Starring, written and directed by Barbara Loden, the film is a gritty portrait about a dissatisfied, economically disadvantaged woman named Wanda Goronski, who lives in Pennsylvania’s coal country, loses custody of her children, and aimlessly wanders into harrowing encounters with strange men until she meets Mr. Dennis, a petty, incompetent criminal, eventually becoming his accomplice to a bank robbery. The film won the award for Best Foreign Film at Venice International Film Festival but made little impact at the box office stateside, and was panned by many feminists at the time. The film was made three years after Bonnie and Clyde, and often compared to its more well-known predecessor; Loden said, “People like that would never get into those situations or lead that kind of life – they were too beautiful … Wanda is [the] anti-Bonnie and Clyde.”

During my first semester at Columbia, my directing professor Nicholas Proferes, the cinematographer of Wanda, was doing a Q&A after a special screening of the film. I showed up mostly because I was curious how Nick could possibly be involved in a movie that seemed like the total opposite of his personality – masculine, old-school and gruff. Nick was a contradiction: he exuded a tough-guy demeanor and studied Buddhism, told hilarious anecdotes about his wild past and waxed poetic about life. He also talked about working with Elia Kazan, a collaborator and close friend whom he’d bonded with as a fellow Greek immigrant in the film business. As the story goes, Kazan introduced Nick to Barbara Loden as a potential D.P. for Wanda, because Nick was open to working with a female director and his background shooting for such documentary cinema vérité pioneers as Richard Leacock and D.A. Pennebaker was ideal for the project. In Kazan’s autobiography, A Life he stated, “I didn’t really believe she had the equipment to be an independent filmmaker, but she and Nick were a good combination.”

The first time I saw Wanda, despite thinking it was a well-made slow burn, I basically couldn’t stand it. I was annoyed at how lost and passive Wanda was and how bad her life choices were. When her husband accuses her in court of being a negligent mother, Wanda agrees and tells the judge her children are better off with her husband. After unsuccessfully asking her boss at the sewing factory for more hours, she ends up getting laid off. Frustrated and penniless, Wanda ends up sleeping with a man she meets in a bar who buys her a few drinks, then tries to latch on to him until he ditches her at a highway ice-cream stand. Soon after, she encounters Mr. Dennis (Michael Higgins) in the middle of a botched robbery of a bar. Without skipping a beat, he berates her, abuses her, and reluctantly lets her become an accomplice in his sloppy robberies.

Loden often said the film was somewhat autobiographical. She identified with Wanda being a transient, and lacking identity. From all accounts, Wanda was a personal portrait born out of Loden’s frustration with her lack of agency as a woman. Her background – a bleak childhood growing up poor in the South – was very similar to Wanda’s. The difference between them was that Loden escaped, moving to New York City. She found work as a dancer at the Copacabana, and was eventually discovered by Elia Kazan, the most famous Hollywood director of the time. Kazan seemed to both admire and objectify her as bold, fearless, a sexual adventurer, maybe a gold-digger. Eventually, they married. Because of studio politics, Kazan replaced Loden with Faye Dunaway instead of letting her play herself in The Arrangement, a film based on their relationship. Loden saw it as a total betrayal. Decades later, Isabelle Huppert championed Wanda and said, “It was almost like the character could be a metaphor for her as an actress, or her as a filmmaker, being tied to the movie business and this man.”

Ironically, it was Loden’s male collaborator and my first directing mentor, Proferes, who motivated me to take another look at the film. Not because he vocally championed the film, but because I was intrigued by how he talked about Loden during the Q&A it was clear that he loved and respected her. After Wanda, Proferes said Loden “wanted to be an artist … to justify her own existence.” I knew exactly what he meant, as I often felt the same way.

I was fascinated that this tough-talking man had worked for a female director back in 1970, and made a film that was very different in comparison to the work he would teach and reference in class. Even then, in 2008, I was an anomaly in a student body – and faculty – that was very white male-dominated. “The Future is Female” was not a slogan back then, nor can I remember more than a handful of films by female directors shown in class.

It took a second viewing of Wanda to make me realize what a masterpiece the film truly is. Like any masterpiece, it gets better each time you watch it – each time I discover new qualities to admire. The long one-shot of Wanda, a small, white dot walking through the drab coalfields, tells us everything we need to know about her character. Many of the scenes are reminiscent of Italian neorealism, or a Garry Winogrand photo. Loden’s complex performance is so naturalistic and layered that you are able to feel her quiet desperation yearning to fight back, even while she makes choices that seem nonchalant.

Much later, I realized I’d harshly judged Wanda because I had literally never seen a female character on screen with those traits before – morally questionable, listless, alienated, an utterly lost soul. We are so used to seeing these traits in male characters, to the point where it’s become an archetype. So often are we shown classic anti-hero characters in film, TV and literature, but rarely do we see anti-heroines.

To this day, women directors are taught to prioritize female empowerment and “strong” female characters with heroic journeys. I am not surprised that this film, released in 1970, was praised at European film festivals but harshly critiqued by many feminist reviewers and writers. Reading some of these reactions now, long after Wanda has been hailed as a masterpiece, feels devastating because it makes me ponder how lonely Loden must have been, being such an outlier in her time.

Pauline Kael, one of the most influential film critics of her time, wrote: “We’ve all known dumb girls, and we’ve all known unhappy girls; the same girls are not often, I think, both dumb and unhappy … She’s an attractive girl but such a sad, ignorant slut that there’s nowhere for her and the picture to go but down, and since, as writer-director, Miss Loden never departs from the misery of the two stunted characters, there are no contrasts. The movie is very touching, but its truths — Wanda’s small voice, her helplessness — are too minor and muted for a full-length film.”

That Wanda has been increasingly screened and celebrated in recent years is reflective of audiences’ growing interest in female characters who are morally reprehensible, lost, existential, or just plain realistic and complex. Knowing the obstacles Loden faced, it feels like a miracle that Wanda was ever made back in 1970. Speaking about Wanda after Loden’s death, Kazan said, “It was like a favor I was doing for her, to give her something to do.” (Kazan was allegedly jealous of how well it turned out and its critical success, and was inspired to make The Visitors, a low-budget non-union film, afterward).

Wanda and all of its backstories about Loden have influenced me deeply. It taught me about myself and about true feminism. So much so, that it inspired me to make my own feature film about a morally ambiguous female protagonist. A psychodrama about a serial imposter who craves emotional connection and identity. Nancy was made as a love letter to Barbara Loden’s Wanda.

For years, I’ve begged Proferes to tell me more about Loden, about their collaboration, about the scripts they worked on after Wanda that nobody wanted to finance. He didn’t want to be interviewed for this article, saying only, “It’s Barbara’s film and she is your inspiration.” I’ve realized that’s true.

Barbara Loden is my inspiration because, as a pioneering female filmmaker, she worked without a net, without role models, without a network of female collaborators – as a lone wolf. She did not have the opportunity like I did to work with a female D.P. (Zoe White), or to proudly assembly a crew that was 80 percent female and 50 percent POC, like I was fortunate to do.

Wanda was and still is a radical piece of cinema. Its very existence challenges our expectations of how women ought to behave, and ultimately what kind of Hollywood narratives should be financed, heralded, distributed and championed.

Kazan recalled that Loden died angry, crying out, “Shit! Shit! Shit!” when her liver gave out and she died of cancer at the young age of 48. I wish Loden were still alive, so she could have had the opportunity to make more work, to have known how much she influenced future generations of female filmmakers, and to known she was not alone. She was a visionary.

Christina Choe‘s debut feature Nancy recently premiered at Sundance in the U.S. Dramatic Competition, where it won the Waldo Salt Best Screenplay Award and was acquired by Samuel Goldwyn Films for theatrical release. Nancy stars Andrea Riseborough, Steve Buscemi, Ann Dowd, John Leguizamo, and J. Smith-Cameron and was included on the Best films of 2018 by Indiewire, The Village Voice and A/V Club. You can pre-order it in iTunes here. Choe’s docu-series Welcome to the DPRK, a personal portrait of North Korea, was also recently acquired and released by Topic Studios/First Look Media, currently streaming online. Her short film I Am John Wayne won the Grand Jury Prize at the Slamdance Film Festival, while her other shorts The Queen and Flow screened at Telluride, SXSW and Aspen, among many others. 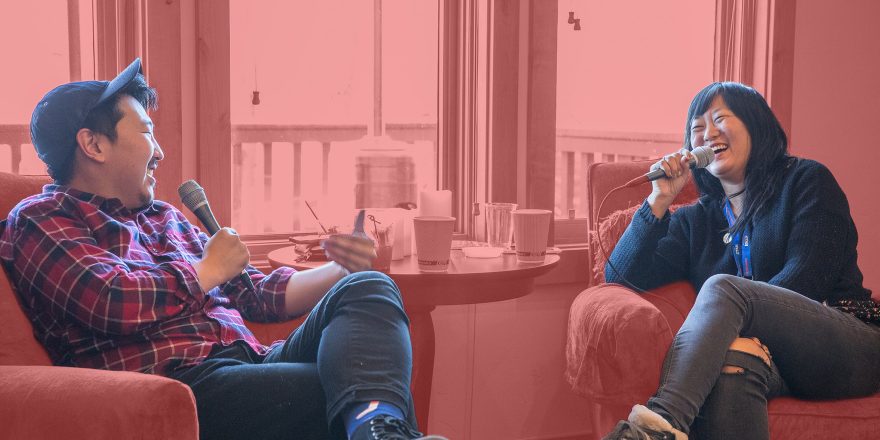 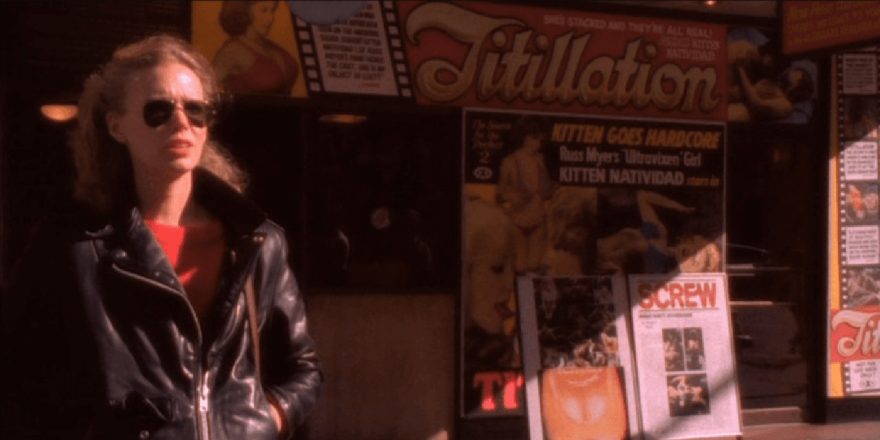