Writer, director and producer Leslie Harris‘ feature Just Another Girl on the I.R.T released in US theaters and 20 countries worldwide in 1993. The feature won the Sundance Film Festival Special Jury Prize, and was an official selection at the Tokyo, Toronto and Deauville film festivals. Just Another Girl on the I.R.T screens at the Quad on July 14 as part of the “New York Woman” screening series. Leslie is the recipient of the IFP Gotham Award Open Palm, AFI Filmmaker Award and National Endowment for the Arts Grant. She wrote, directed and produced the Showtime award-winning short Bessie Coleman: A Dream to Fly; Coleman was the first African American to receive a pilot’s license, two years before Amelia Earhart. Leslie’s new feature, I Love Cinema, is a satire about sex, race and the alt-right media, and is still looking for financing.

I remember walking out of a movie theater, frustrated and disappointed, but motivated. In the ’90s, American movie theaters were filled with films centered on male characters. Where were the stories about a Black woman like me? Waiting around for a male director was not an option, and that’s why I wrote, directed and produced Just Another Girl on the I.R.T. I had no idea how I was going to raise the money, assemble a crew and shoot the film. Yes, I was scared, but I knew I could do it because I always wanted to be a director.

A few years after the release of my feature, while cleaning out the attic after my mother’s death, I found a three-ring notebook binder containing one of my grade school essays. The assignment was something like, “What would you like to be when you grow up?” I wrote, “I want to be a director…” I had forgotten ever writing this. What made a little Black girl write such a thing?

Growing up, my love of cinema came from watching foreign films. My older brothers loved movies. At the age of 10 or 11, titles like Truffaut’s 400 Blows, Fellini’s 8½ and Wertmüller’s Seven Beauties were played on VHS tapes all around my house. Magazines like Film Comment, Variety and Sight & Sound were more normal than the daily newspapers. You see, despite growing up Black and in the inner city, my brothers were cinema nerds. As their little sister, I followed suit. The pain and isolation of a young French boy in 400 Blows, the excitement and ennui of a member of Mussolini’s Fascist secret police in Bertoclucci’s The Conformist or the tragic isolation of a Senegalese maid in Ousmane Sembène’s Black Girl – at that age, I’m not sure I could relate to or even understand such adult fare, but I loved the subtitles, the music, the filmmaking. My mother loved movies too, but more classic Hollywood cinema. So after school, Mama and I would watch the afternoon movies, mostly in black-and-white, with her favorite actresses, Dorothy Dandridge, Bette Davis and Jean Harlow. I guess cinema was in my DNA. That was both a blessing and a curse.

As a kid, I was weird. When I mentioned Alain Resnais’ Last Year at Marienbad, Agnès Varda’s Cleo from 5 to 7 and Antonioni’s Blow-Up, people gave me puzzled and dismissive looks. Well, back then if you were a film fanatic, you were probably a college student, male and white. As an adult, I now idolize my brothers for their eclectic taste, love of movies and breaking stereotypes. As a girl, I wanted to hide. I learned to keep my love of cinema to myself and my dream of becoming a director a secret too.

As a college freshman majoring in studio art, I couldn’t resist an advanced cinema studies class. “You can actually get college credit watching films?” Being a Black young woman, I was constantly underestimated and discouraged from taking these courses. Nevertheless, I found a way. I repeatedly wasn’t chosen to be on the student crews in production classes. At that time, most of the film students were white and male. So the chairman of the department, who was now impressed with my knowledge of cinema, gave me permission to try out an Oxberry Animation Stand that no one wanted to use. I made animated shorts, but I had bigger plans to someday work with live actors, not just the cartoon characters I was drawing.

After college, I moved to New York City with just a hundred dollars and a suitcase, and alone. Even my father underestimated me; he wanted his youngest daughter to stay in Ohio, to get a “stable job.” My mother was different. When she was a young woman, her dreams were underestimated too. Mama had big regrets, but she gave me strength, determination and a Bible for protection in the Big Apple.

As a Black female filmmaker, whenever I mentioned making a narrative feature, I was told, “You’ll have more success as a woman making a documentary.” Again, underestimated. But I was not deterred.

Recently, I went over my production journals for a documentary I’m shooting about the making of Just Another Girl on the I.R.T, entitled an A Film Hollywood Dared Not Do. I started writing Just Another Girl on the I.R.T after quitting my N.Y.C. advertising job, but I still had to pay the rent. So I worked two jobs, one as a temp and a second at Film Video Arts, a non-profit arts organization, in order to get access to equipment. I submitted my Just Another Girl on the I.R.T script to a mini-major. I was ecstatic when an exec called. “We love the script, but can you make Chantel’s boyfriend a drug dealer?” Now, my characters were being underestimated. I walked away, but where was I going to get funding?

I gathered friends and family, scraped together short ends, borrowed equipment and stole locations. We shot a black-and-white sample reel; it was tough going, but we did it! After work, I dashed to a fledgling lab, the only processing lab I could afford, to see our hard work. I was stunned to learn that the film had been processed in the color bath, rather than the black-and-white. It was ruined, and I was devastated. I asked actors, friends and crew if they would shoot again. They were wonderful and willing. I assembled all again and shot another sample. I applied for a $150 grant – yes, $150 to make a feature! I sat behind the judges as they viewed my sample reel. I felt positive when the judge was tapping his feet to the blasting All-Female Hip-Hop soundtrack. That grant was a lifesaver obviously not enough to make a feature … but that small grant gave me a track record for fundraising.

After that, grants from American Film Institute, National Endowment for the Arts and New York State Council on the Arts rolled in. Before we started production, a grueling 17-day shoot, I sought advice from an established indie filmmaker who I idolized. This male director said I could never make a feature with just a small amount of grant money. Again, I was underestimated, but not deterred.

There were so many obstacles. I replaced the lead actress, dumped my idea of shooting in black-and-white – all my favorite foreign directors shot in black-and-white, right? – and started over in color. During production, I planned a magic-hour scene under the Brooklyn Bridge. Chantel reveals some shocking news to her boyfriend. We had a tight shooting schedule. When we arrived at our location, there was a big-budget commercial production already there with Winnebagos, top-of-the-line equipment, and even a Broadway star. I told them I was shooting a feature. They laughed. Then my D.P. looked up from the eyepiece and said, “I can’t see a thing.” I realized it was pitch black. My magic-hour shot was ruined. I was desperate, distressed, deflated – but miraculously the commercial director turned his huge HMI light toward our production. I got my shot. That was divine intervention … but post-production was upon us, and we were out of money again.

I could not afford an editor, so I started editing at home. It was Christmas, and film cans took up more space in the refrigerator than food. I couldn’t afford to go home for the holiday, but strung ornaments and lights along the flatbed to keep from crying. I got a phone call from the author Terry McMillan, who read the script and sent a check to help with post. So did documentary director Michael Moore. Between them, Terry and Michael saved the day, so we could hire an editor to get us to a rough cut.

Most of the foreign directors I idolized shot in 16 mm for speed, portability and time. So I did too. I chose Super 16. Unfortunately, I didn’t realize the enormous expense of getting a 35 mm blow-up. There was no turning back. I was stuck. I had to get a distributor to pay for the cost. Miraculously, a mini-major agreed to see the rough cut; there were scratches, a temp track and no titles, but we had a story! Upon seeing the movie, the distributor remarked that it was a coming-of-age film like Truffaut’s 400 Blows, but from a Black young woman’s POV. See, my love for foreign cinema did shine through. The late, great critic Vincent Canby wrote in The New York Times that the character of Chantel reminded him of actresses of the 1930s, like Jean Harlow. Watching those black-and-white movies after school with my mom paid off too. We went on to win a Special Jury Prize at Sundance, and then play as part of the official selection in Tokyo, Deauville and Toronto. I traveled alongside my fellow directors Robert Rodriguez, Quentin Tarantino and Bryan Singer to fancy festivals. They all went on to great careers. Despite Just Another Girl on the I.R.T’s critical acclaim and a theatrical release in the U.S. and 20 countries worldwide, I have yet to make a second feature.

Today, 25 years later, I’m still looking for financing. It’s not unusual for women directors, especially women of color who haven’t made their second feature. Executives remark that my new screenplay, I Love Cinema, is compelling and great. But nope! Still no financing! Since 1993, the feature film opportunities for women and people of color in front of and behind the camera have improved, but not enough. 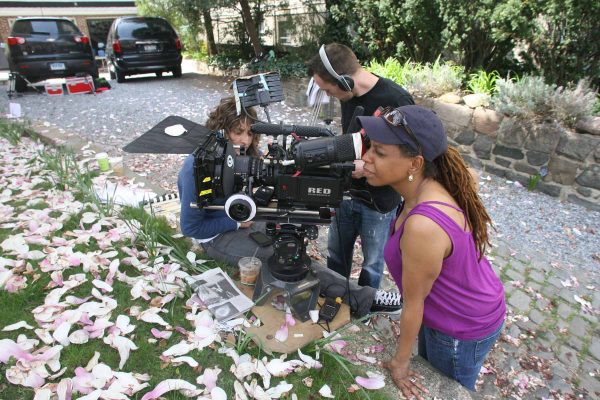 I will make my second feature, though! This little Black girl grew up to be a feature director. So don’t underestimate me.

Writer, director and producer Leslie Harris‘ feature Just Another Girl on the I.R.T released in US theaters and 20 countries worldwide in 1993. The feature won the Sundance Film Festival Special Jury Prize, and was an official selection at the Tokyo, Toronto and Deauville film festivals. Just Another Girl on the I.R.T screens at the Quad on July 14 as part of the “New York Woman” screening series. Leslie is the recipient of the IFP Gotham Award Open Palm, AFI Filmmaker Award and National Endowment for the Arts Grant. She wrote, directed and produced the Showtime award-winning short Bessie Coleman: A Dream to Fly; Coleman was the first African American to receive a pilot’s license, two years before Amelia Earhart. Leslie’s new feature, I Love Cinema, is a satire about sex, race and the alt-right media, and is still looking for financing. 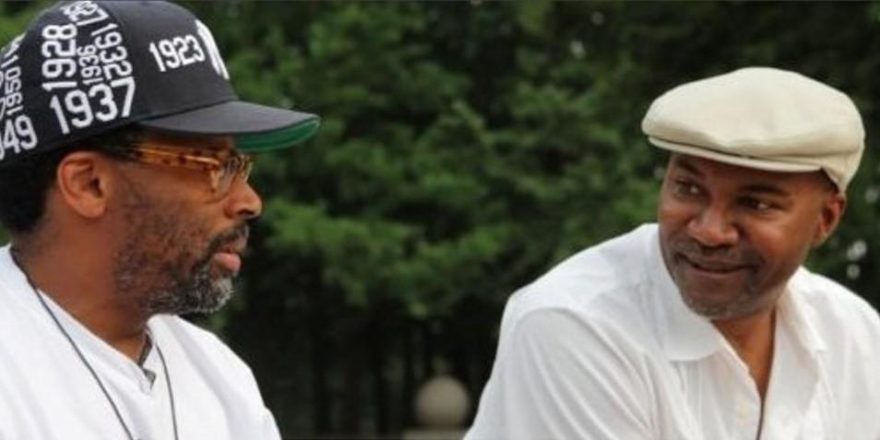