Fooled you! I wanted to write “666” lessons because of the devil, of course, but I only landed on six. They say, “Leave the people wanting more,” which is exactly how I hope this article and everything I write plays out.

We’ve had a lot to celebrate recently; Memorial Day, Father’s Day, Pride, Gemini season. (Thank you, I’m a Gemini.) But one thing that I really want to celebrate is the 15-year anniversary of the iconic movie The Devil Wears Prada. I can’t believe it’s been 15 years since one of the most memorable closing lines of a movie, “Go!” made such a lasting impression on me. I still watch it every time it’s on TV, which is often. The fashion, the cunning quotes, and the brilliance of Meryl Streep in her most evil role make it one of my all-time favorite movies. So I wanted to honor this movie through the lessons I’ve learned from it and share my wisdom with you! An education can look like anything, even if it’s from the devil herself. (It’s me now, I’m the devil: Welcome to Hell!)

1. Hot Boyfriends Have Feelings Too
Let’s talk about Nate for a second. He’s played by Adrian Grenier and he’s extremely hot. Not only that, but he’s a hot straight man who knows how to cook. (I can only hope his character was based on someone real.) Does he have a big part? No. He makes a grilled cheese sandwich. That’s his major moment in the movie. But Andy totally takes advantage of him and we feel for Nate by the end of this movie. It’s not often you meet a partner who knows their way around a kitchen, and is that good looking. So, if you do find the one who checks all two of those boxes, don’t do things like miss their birthday! He sulked out of that room without even taking a bite of a cupcake so you know he was sad. Even I’m still thinking about that cupcake. So, this movie taught me that you need to make time for your loved ones because hot boyfriends have feelings too. It’s hard to picture any emotions behind a pretty face and rock-hard bod holding a spatula, but apparently they do exist and I learned that from Nate. That’s why I make sure to tell my hot boyfriend things like, “Don’t worry, you are not second to my career,” when I’m looking at my phone throughout our entire meal. It assures him that I do love him and that what I’m doing is definitely not more important than him, even if it is! 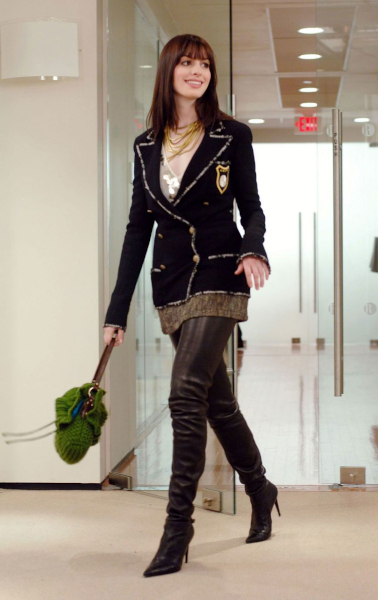 2. A Good Outfit Will Get You Places
For me, this movie really begins on the day that Andy (Anne Hathaway) walks into the office in her new lewk, where she wears the famous Chanel thigh-high boots. She’s fully made over and in a great outfit. This outfit is timeless in that she could blend in at a Manhattan private school cafeteria, serve cocktails in the Meatpacking district, or walk the runway at a fashion week show. Once she wears a good outfit, her entire world starts to open up: she’s respected more at her job, she walks around town full of confidence, she attracts men who want to date her and women who want to look like her. She’s the new “it girl” and all it took was an outfit. I truly believe on my worst days, that if I get up, do my hair, and put on a good outfit, I can conquer the world. Even during the pandemic, to give myself an ego boost, I’d put on makeup and a matching athleisure set just to feel like I was going places. (I was going from my living room to my kitchen, which ironically is the same room in my Brooklyn apartment.) I guarantee if you put on a good outfit, you will feel better about yourself and therefore go places you might not even expect. Maybe your next lover is around the corner, maybe you’ll nail an interview, or maybe you’ll just feel like a million bucks in a Panera while ordering a sandwich to devour in your car. It’s your journey, so get dressed for it! 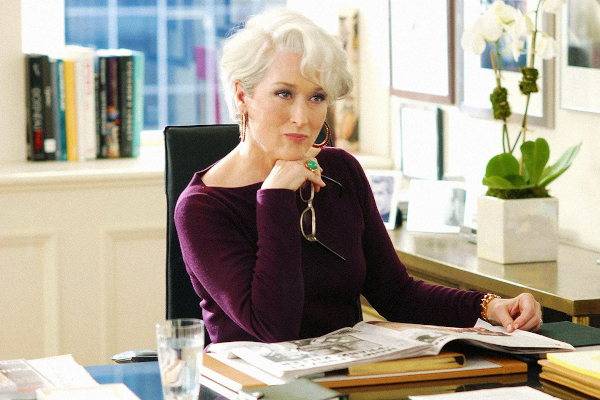 3. Miranda Priestly Has BDE, So I Want BDE.
A few years ago, we learned the term “Big Dick Energy” or “BDE,” but the soul of it has been around for a long time. Miranda Priestly (Queen Meryl Streep) walks into a room with more BDE than any man in a position of power. This was the role that made me want to be the boss. It made me want to silence people mid-sandwich-bite-at-lunch because they hear the clicking of my Dior shoes walking down the hallway. Some people might confuse confidence with BDE, to which I say, “It’s confidence after you grow a pair.” If you look at her character, she is subtle and collected and has a very solid routine. AKA, she has it together! And even though her employees are frightened by her, they all have tons of respect for her and her work. I’ve thought about what Miranda Priestly would be like if her character were played by a man. And to be honest? I don’t think it’d be that different. She commands the room and has clear expectations for the people who work for her. I find it admirable, and I want to be successful enough to eat a meal from a steakhouse for lunch. Now that’s BDE. 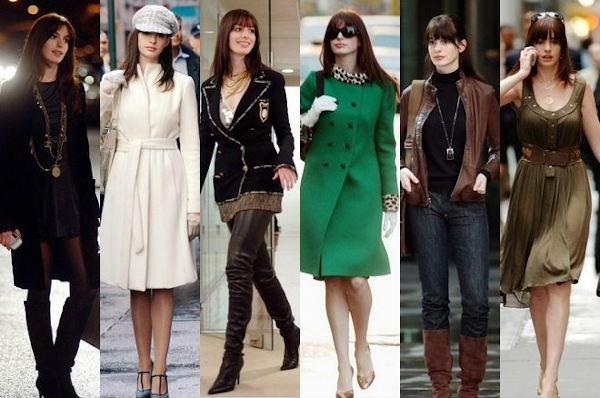 4. Good Fashion is Timeless
OK, I don’t know if I totally learned it from this movie, but this movie does confirm this lesson for me! While I unfortunately love fast fashion and shop at Zara almost nightly on my phone, I have saved great fashion pieces that have lasted me 15 to 20 years. The outfits in this movie, especially Andy’s, all feel timeless to me. From the Chanel thigh-high boots I mentioned (that are warranted to mention twice) to her black lace cap-sleeve gown she wears to the gala, to the green button-up dress she runs around town in, these pieces are high fashion and they could last forever. I’d wear most of these outfits today and this movie came out in 2006. So, let me impart my expensive taste and wisdom to you: Every so often, splurge on the good stuff. Get yourself a designer bag or shoes. If you love fashion, it’ll never go out of style. You’ll make sure of it. And if it does, let me know and I’ll probably buy it secondhand from you on The RealReal! 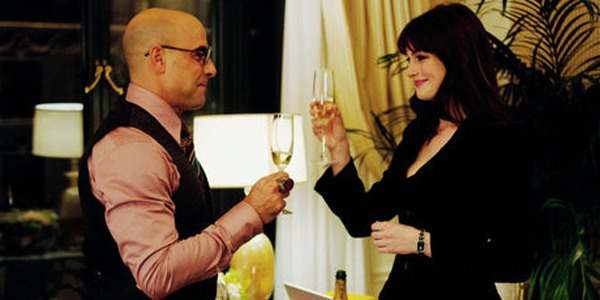 5. Always Have a Friend at Work
No matter what job you have, it’s so important to have someone to confide in at work. A friend at work will be the one to tell you it’s going to be OK, to quit and run, or that you have a piece of kale stuck in your teeth before a meeting. I learned about the work BFF from this movie, through the relationship between Andy and Nigel (Stanley Tucci). He sees this girl who has no sense of style and is working at the center of the style universe and he takes her under his wing and gives her designer clothes. Instant best friend for me! I’ve always had friends at jobs and I feel like I’ve talked to them about everything and anything. Talking to your work friend is like therapy, but you’re both getting paid to be there. They’re not fully invested in your life, only the hours you spend together. They want you to be cool so you can have a peaceful place to work, which is why they have a stake in your happiness. I know sometimes people aren’t “there to make friends” but have an open mind. You never know when you need to shit-talk the boss over a margarita! 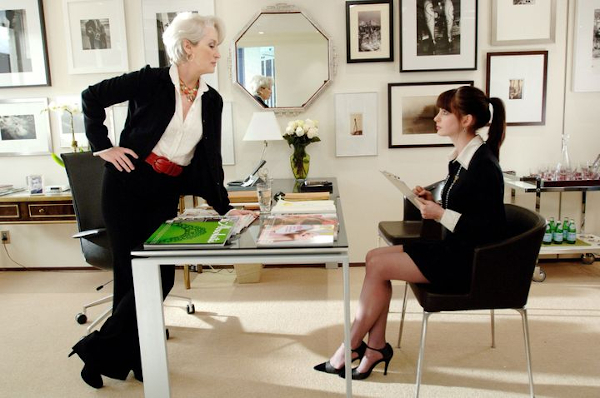 6. Never Be an Assistant … Again
This is a very personal lesson I took away from this movie, as I wasn’t an assistant when I saw it. But because I watched Andy go from clueless to success over the course of the film, I always knew I could be an assistant if the opportunity ever came up. Well, fast-forward many years … I became one. I did it for about four years in New York City. Luckily, I worked for much nicer bosses than Miranda Priestly. They were kind to me! However, while looking back on this experience, I can confidently say I won’t do it again. Even nice bosses sometimes want to change their flight at 5 a.m., two hours before they’re supposed to board a plane to Switzerland because they don’t feel like flying Delta anymore because the Sky Club Lounge smells weird. Or they call you in the U.S. from Germany with a request for more pillows in their hotel room, even though there is a lobby button on the phone next to their bed. Or they tell you you’ve been late too many times and might need to look for other work. (OK, that last one is probably on me …) Being an assistant is a selfless, hard job. Sometimes you learn a lot and other times you get walked all over. But it gave me thick skin and I know now how I’ll treat my own assistant someday: with a huge, giant bonus every holiday season, including a pair of thigh-high Chanel boots.

Anna Roisman
Anna Roisman
Anna Roisman is a comedian, host, writer and actor in NYC. Anna is known for hosting HQ Trivia and HQ Words on the Emmy-Nominated app. She is a regular comedian on the Buzzfeed series, “Did You See This?” Anna’s work has been featured in the Tribeca Film Festival, New York TV Festival, Just For Laughs in Montreal, People magazine, New York Times, Los Angeles Times, Vulture, Huffington Post, Funny Or Die, Elite Daily, and more. She is the creator and host of the podcast Unemployed With Anna Roisman, and co-producer and host of Quickie Fest: The One Minute Movie Festival in NYC. She writes a bad movie column called “Am I The Only One Who Loves…” for Talkhouse. She also likes good movies too! Anna performs standup comedy and sings all over. For comedy videos, reels, and press, check out AnnaRoisman.com.
Anna Roisman
Anne Hathaway
fashion
film commentary
Meryl Streep
The Devil Wears Prada
New Chance and Prince Nifty Don’t Say Things They Don’t Mean
Spotted: a Gossip Girl Newsletter from Sadie Dupuis (Sad13, Speedy Ortiz) 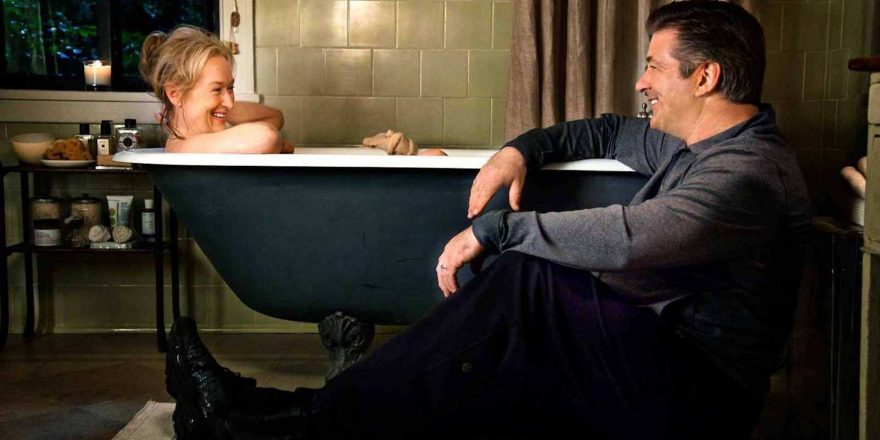 Am I the Only One Who Loves … It’s Complicated?