You know the popular saying, “Wanna feel old? [insert thing to make you feel old…]”? I’m sorry, but this entire piece might just do that. What I’m hoping, though, is that we’ll feel the love and nostalgia and “bidi bidi bom bom” of one of the best biopics of the ’90s, and forget how ancient we really are. If you can believe, it has been 25 years since the iconic movie Selena opened in theaters. A movie that touched a lot of us and still remains one of the best today! Since I’ve watched this movie countless times over the years – if not every year – I wanted to share some of my favorite memories.

First of all, Selena had such an impact on me, a millennial-who-doesn’t-share-her-age, because it was about a strong, talented female star who made her dreams come true. Although her life ended way too soon, this movie showed us how incredible a talent she was. It was also my introduction to biopics. The fact that this was a movie about a real-life story was very cool to me. With the influence of Britney and Janet and the Spice Girls, I would walk around saying I planned on becoming a pop star when I grew up. I didn’t know Selena or her music until this movie came out, but it was life changing! It also made us all fall in love with J.Lo. In fact, I was so obsessed with this movie and the story behind it that I chose to do my middle-school biography project on Selena. When other kids came to school to present their projects on Amelia Earhart and Albert Einstein, I pranced into school in a bustier (!), a cow-print skirt and a leather jacket, because I was presenting in costume. I used to listen to the soundtrack over and over again and feel so many emotions, because back then it was hard to grasp that Selena wasn’t around to see the success of the film about her.

While this movie saw success after Selena’s tragic death, it also birthed the career of J.Lo – one of my personal heroes, who defies science and gets hotter every year! J.Lo’s performance in this movie is so pure and perfect. The way she embodied Selena should’ve earned her the Oscar, in my opinion. (OK, while we’re here, J.Lo also deserved an Oscar for Second Act, which I’ve written about before on Talkhouse – but that’s for another time.) I’m glad that she was nominated for a Golden Globe for Selena. So impressive at age 23! And while she is the queen of romcoms now, this movie let her showcase all of her talents.

While I will be dressing up in a bustier and cow-print skirt at home/on Instagram to honor Selena for its 25th birthday, I also wanted to write about some of my favorite memories from the movie. I still watch it! Selena airs on TV all the time, which I’m sure you know if, like me, you haven’t cut the cord yet. It’s also streaming on HBO Max, so do yourself a favor and watch it for the anniversary!

1. The iconic medley from Selena’s final concert in Houston, featuring hits like, “I Will Survive” and “Last Dance,” which makes you feel like you’re at a bat mitzvah.

2. When Selena sings “Blue Moon” as a kid, and her voice is dynamite! Also, her dad’s reaction when he realizes she can sing.

3. The fact that Selena’s sister, Suzette, was the drummer in the band was badass. Female drummers rule – we need more of them. 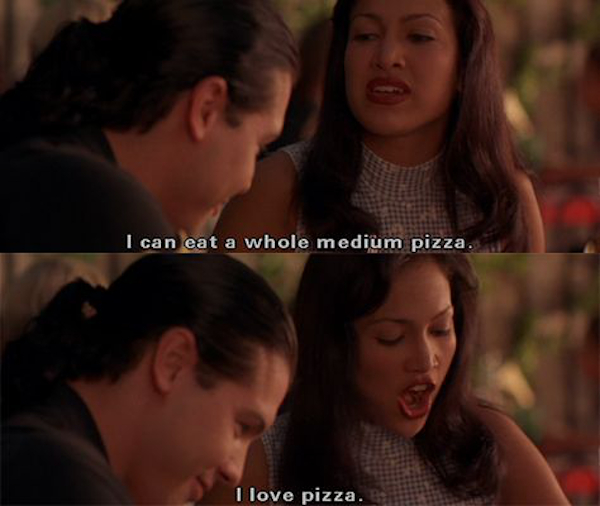 4. When Selena eats a whole pizza with her long nails and also says she loves Doritos? Icon status.

5. In general, we love a supportive dad and Selena’s father, Abraham Quintanilla, dedicated his life to making his kids a successful band.

6. When Selena’s mom teaches her the “washing machine” dance move by the ocean.

7. Dad’s freakout when his daughter Selena shows up onstage in a bustier that he calls a “bra.”

8. The tour bus! They had so much fun on that bus. It made me want to go on tour someday with people I love.

9. Selena and Chris flirting when he first gets hired to play guitar in the band. It’s so playful and innocent! It’s nothing like what we deal with over text today …

10. When Suzette cuts Chris’s hair because her dad doesn’t think he looks clean cut enough. (We’ve all dated someone our parents would prob not approve of!)

11. Leggings with a belt! Selena’s style has totally come back into fashion today. We are still living in a ’90s era in a big way.

12. When Selena silences the rowdy crowd at the outdoor concert and then sings the slow version of “Como la Flor”? That’s when you know she’s reached royalty status.

13. When Selena’s dad threatens to break up the band because she’s hooking up with Chris, it feels like every dad who doesn’t like their daughter’s first boyfriend.

14. The costumes and dance moves in the “Bidi Bidi Bom Bom” montage are out of this world. Such a bop!

15. When Selena and her friend shop for Grammys dresses and the racist employees tell her the dress is expensive and then everyone finds out Selena is in the mall? This is the Pretty Woman throwback scene we never knew we needed!

16. A follow-up to that last one? No prob. When Selena says, “We don’t need the dress.” It feels like the classiest dig ever!

17. When Selena records the song “I Could Fall in Love” and J.Lo nails the riffs and teaches us all a lesson in lip-syncing.

18. Selena’s fashion show! Watching this today as she opens her boutique while also having her singing career feels like foreshadowing for J.Lo’s career.

19. When Yolanda gives Selena the ring with the egg, it’s cute and seems nice, but it’s also weird AF to get a friend a ring. This was the red flag for me.

20. When Selena and her mom have a sweet conversation on the bus, and Selena says she wants to have a baby, it’s the nicest moment!

21. Seeing Selena perform in the huge concert arena, compared to the smaller outdoor shows she started out doing, feels like the biggest moment in her career.

22. The dream Selena has where she sings “Dreaming of You” and she doesn’t catch the rose thrown onto the stage. This is an image I will never forget.

23. The heartbreaking scenes of the family finding out that Selena has passed away make me cry every single time. To see such a close-knit family experience this loss is beyond.

24. The real footage of Selena at the end of the movie that confirms J.Lo blew this performance out of the water. It shows us how calculated every move she made actually was!

25. The vigil of Selena’s fans after her passing just shows how many lives she impacted.

Selena was an iconic singer, dancer and performer who gave so much joy and inspiration to so many people in her short life. Thank God for this movie, because it allows her legacy to live on. So, it’s up to us to continue to watch this movie and share her gift with those who weren’t around to experience it in real time. I only listed 25 memories, but the list could go on and on, so please feel free to add to the list of Selena memories in the comments below!

And if you ever need a good workout song, I strongly recommend “Bidi Bidi Bom Bom.”

Anna Roisman
Anna Roisman
Anna Roisman is a comedian, host, writer and actor in NYC. Anna is known for hosting HQ Trivia and HQ Words on the Emmy-Nominated app. She is a regular comedian on the Buzzfeed series, “Did You See This?” Anna’s work has been featured in the Tribeca Film Festival, New York TV Festival, Just For Laughs in Montreal, People magazine, New York Times, Los Angeles Times, Vulture, Huffington Post, Funny Or Die, Elite Daily, and more. She is the creator and host of the podcast Unemployed With Anna Roisman, and co-producer and host of Quickie Fest: The One Minute Movie Festival in NYC. She writes a bad movie column called “Am I The Only One Who Loves…” for Talkhouse. She also likes good movies too! Anna performs standup comedy and sings all over. For comedy videos, reels, and press, check out AnnaRoisman.com.
Anna Roisman
biopic
film commentary
Jennifer Lopez
Selena
Talkhouse Weekend Playlist: The Melting Pot of YĪN YĪN
Jonathan Schenke (P.E.) and Jamie Stewart (Xiu Xiu) Try to Record Everything 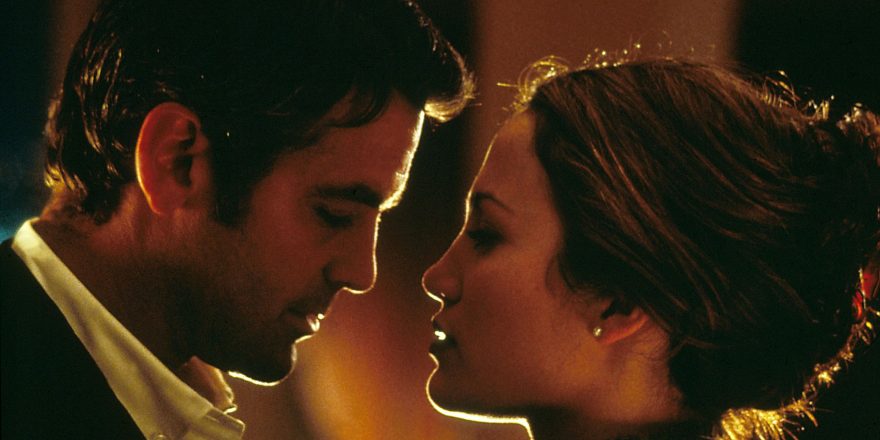 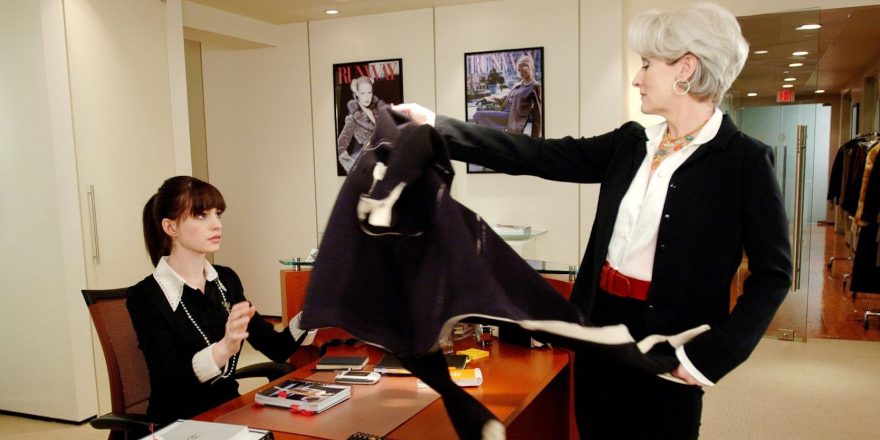 666 Lessons I Learned from The Devil Wears Prada