San Francisco filmmaker Daniel Kremer’s latest film, Overwhelm the Sky, is now available to view via Kino Lorber. on KinoNow, iTunes, Google Play, Vudu, and YouTube. He has directed seven feature-length films and has provided audio commentary tracks for AGFA, Shout! Factory, Kino Studio Classics, and Scorpion disc releases, and essays for Twilight Time special editions. His book Sidney J. Furie: Life and Films was published through Patrick McGilligan’s Screen Classics Series in 2015. He is currently under contract at Oxford University Press for the first book about Joan Micklin Silver. His other films include the independent dramas Raise Your Kids on Seltzer (2015) and Ezer Kenegdo (2017). He has newly been named a Trailers From Hell guru by Joe Dante.

I was in fine form. I had never spoken better in public, on any subject, at any other point in my life. There I was, back in my hometown of Pittsburgh, Pennsylvania, for the Three Rivers Film Festival. Old friends and family were in the audience. I had just presented my three-hour microbudget indie film Overwhelm the Sky in roadshow format, with musical overture, intermission, and printed souvenir programs, like the old epic event pictures of yore. It was an ambitious undertaking, potentially fraught with accusations of delusions of grandeur. Sure, my film wasn’t Ben-Hur, but though it was made on almost nothing, it still saw much success. This kind of presentation was the bold gambit my crazy little movie needed … and one that I always dreamt of someday realizing.

I stood up and rhapsodized on the ceremony and sanctity of public cinema spectatorship, how movies were meant to be experienced communally, ideally on a big screen. It was all phrases like “magic in the darkness” and stuff like that. Yeah, maybe it sounds corny, but I felt like I connected with everyone assembled. I was a preacher, or more aptly, “the rabbi of noir,” as a filmmaker friend once called me.

Then, I returned to San Francisco, only to discover that Pittsburgh was closing its last two remaining arthouse theaters, including the Harris, the venue where I had just presented Overwhelm the Sky. I had just delivered a cinephile sermon inside what was soon to be yet another boarded-up movie palace. It was depressing. Though the Harris was eventually saved by the Pittsburgh Cultural Trust, no one swooped in to rescue the Regent Square, a theater I grew up going to, which closed permanently. I’d seen everything there, from Beauty and the Beast and Aladdin in their first runs to later revivals of Blow-Up and The Last Picture Show (after it had become an arthouse), often with my mother. It was one of the places where I first learned to love cinema. Now it’s all gone, save the memories.

As Overwhelm the Sky continued screening at film festivals, often at similarly gorgeous movie palaces, I kept wondering what the respective lifespans of these hallowed places would be. In periodic daydreams about their uncertain futures, I would grow despondent. Then Covid hit, and society itself shut down. I got an empty feeling in the pit of my stomach, and in my heart, realizing this could really be the death knell for little arthouses, the only theaters that dared play films like mine. In competition with multiplexes and streaming services, how could these arthouses survive?

F. Scott Fitzgerald once wrote, “The sentimental person thinks things will last. The romantic person has a desperate confidence that they won’t.” Fitzgerald would likely see me as a hopeless romantic, a mix of nostalgic and pessimistic. The Germans even have a word for it, “weltschmerz,” which is defined in some dictionaries as “romantic pessimism.” Well, if that’s what it is, I’ve got it. Maybe my next movie should be The Weltschmerzers. (On second thoughts, it sounds too much like a Mel Brooks flick about a beleaguered Catskills clan …)

I won’t hide the fact that I’m a maven of the so-called “archaic.” But guys like me aren’t just bitterly holding on to the old-fashioned, mostly because we don’t really see things like physical media or special screenings as archaic at all.

It was maybe some of my genuine nostalgia that led me to exhibit Overwhelm the Sky as a roadshow presentation, a format that hasn’t been in wide use since at least 1972, though Tarantino dusted it off in 2015 for his 70 mm extravaganza, The Hateful Eight. I certainly wasn’t aping him. I grew up an obsessive collector of VHS tapes, and MGM’s attractive gold foil-stamped two-volume sets for their epic motion pictures were among my most prized possessions. Many of the films in that particular collection first introduced me to the concept of the roadshow presentation. My entry picture: It’s a Mad, Mad, Mad, Mad World. In the early ’90s, the internet was in its infancy, so I had to read about roadshows by other means. I started seeing the other epics with those gold-embossed MGM covers: Hawaii, Raintree County, How the West Was Won, The Alamo, and John Schlesinger’s Far from the Madding Crowd, among many others. I loved the history and the ceremonial nature of the format, and I swore that, if one day I ever made a lengthy movie, I’d present it roadshow style.

Overwhelm the Sky wound up being that roadshow picture and, as it turned out, screening in this way helped get us much-needed coverage, attention and interest. At roadshow screenings of Overwhelm the Sky, there was something magic about watching the word “Overture” fade in on the screen. It often gave me chills. There was something about the pseudo-pageantry and ceremony of it all. Audiences got to nestle into my story with the help of my composer’s special orchestral prelude. Meanwhile, I sat strategically at the back of the theater, ready to dash out of sight before the “Intermission” card came up. During the break, sometimes from the balcony, I’d observe audience members sit peacefully with the first half of the film, or leaf through their programs, or consult their neighbors about their interpretation of what they saw. They were perhaps used to this when seeing a stage play, but they really weren’t accustomed to it with a movie (at least a new one). I overheard some of their “What do you think’ll happen next?” conversations. It was the sound of emotional investment.

It was incredibly exciting as a filmmaker to have this experience, one which is only possible in a theatrical environment. It definitively proved to me that the communal moviegoing still counts for something. I’ve recently heard some so-called “forward-looking” people talk of arthouse exhibition like it’s a novelty, like it’s already dead … which would make me, what? A necromancer?

When I attended the Telluride Film Festival in late summer, people were ecstatic to be back at this beloved movie mecca in the mountains. Strolling down Colorado Avenue, I saw the word “Show” displayed on various signs, banners, and decals. It’s kind of the motif of the festival: “Show” – a simple word, with a broad meaning. Telluride and many enterprising arthouses continue to demonstrate that the “show” is still the thing. My film Overwhelm the Sky made its own attempt to prove that, as well. Was the experiment worth it? I have no regrets. I think I succeeded, and I’ll continue fighting to keep the “show” where it belongs.

San Francisco filmmaker Daniel Kremer’s latest film, Overwhelm the Sky, is now available to view via Kino Lorber. on KinoNow, iTunes, Google Play, Vudu, and YouTube. He has directed seven feature-length films and has provided audio commentary tracks for AGFA, Shout! Factory, Kino Studio Classics, and Scorpion disc releases, and essays for Twilight Time special editions. His book Sidney J. Furie: Life and Films was published through Patrick McGilligan’s Screen Classics Series in 2015. He is currently under contract at Oxford University Press for the first book about Joan Micklin Silver. His other films include the independent dramas Raise Your Kids on Seltzer (2015) and Ezer Kenegdo (2017). He has newly been named a Trailers From Hell guru by Joe Dante. 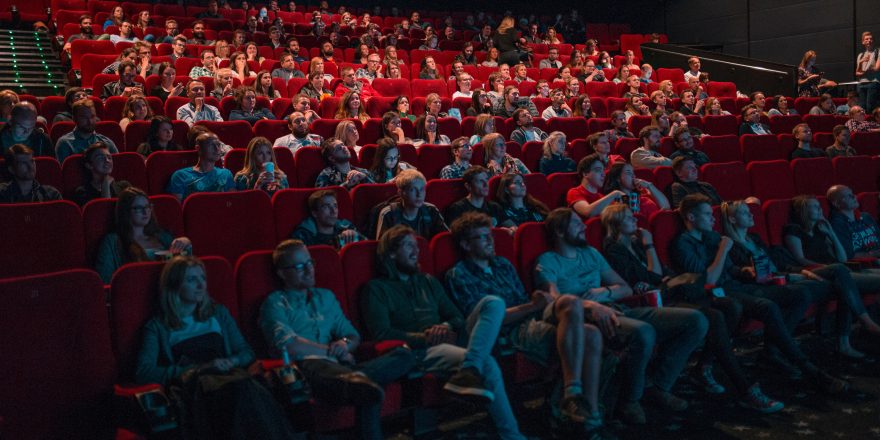