In January of this year, depressed and horrified by the presidential election, my wife and I attended a meeting for our city’s chapter of a nascent resistance organization whose goal was to slow the new administration’s agenda by putting pressure on local Members of Congress. Before this, I didn’t even know who my House Representative was, a civic deficiency I shared with many other progressives. Even though we had no prior political experience, and no intention of getting deeply involved, within a month we were organizing actions, leading rallies and helping manage a membership of over 2,000 like-minded citizens.

And I’m pretty sure it saved my sanity. Despite the crazy news coming out of Washington by the hour, if you can get a hundred people down to your congressman’s office to express their concerns, you sleep soundly that night. And we’ve had some great victories over the last couple months. The travel ban is halted, the Obamacare repeal is a bust, Steven Bannon is off the National Security Council. Obviously, this is due to the inspirational work of journalists, lawyers and activists all over the world (and the fecklessness of the GOP), but we played our small part, and I’m proud of that.

So how did it happen? How did a couple of independent filmmakers get sucked into political organizing? While I don’t think my political beliefs have changed drastically since I got into filmmaking, I do think the experience of making films profoundly changed what kinds of challenges I felt I could tackle.

The first step to organizing a political action, like an independent film, is getting people to trust and follow you. You must express a vision that excites them and convince them that joining you will be worth their time. You’re a leader and a cheerleader, showing gratitude for your supporters’ contributions, but also wanting them to feel lucky to be a part of it. 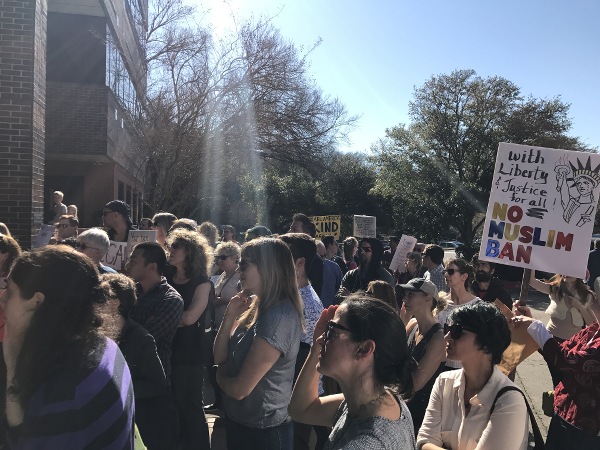 On the ground, you function a lot like an assistant director, wrangling large groups, assigning tasks, making sure everyone knows what’s going on and what’s happening next (and you get to use a bullhorn!). And you have to field a seemingly endless string of questions that you have to pretend like you have answers for. All the while, hoping people don’t get fed up or bored or tired and wander off.

You also have to be what some would call persistent, but I like to call “respectfully pushy.” Anyone who’s made an independent film knows that you never get a “yes” right off the bat. If you want that actor, that perfect location, that extra budget, you can’t be afraid to be annoying about it. As someone who is not naturally assertive, I found that lesson invaluable when trying to convince a security guard to let us in the building, or a senator’s staffer to come out and talk to the crowd, or a local news station to send over a camera crew.

Dealing with publicity in general is something independent filmmaking prepares you for, too. Knowing which outlets will be good vehicles for your message, trying to predict what angles they’ll be interested in, and which members of your team make the best representatives. Both endeavors require smart social media campaigns, to keep your established demographic engaged and enthusiastic with an eye to recruiting new followers.

And, of course, there’s the actual filmmaking. No other media is as emotionally and psychologically impactful as the moving image, and having even rudimentary video production skills can be a tremendous asset to political activism. We create a documentary short film (of sorts) out of almost every event we organize, and it’s hard to overstate their usefulness. They give pride to those who participated, encourage new members to join the group, offer comfort to the pessimistic, motivate other activist groups across the country, and of course, show our strength to opponents and elected officials. For us, it’s the last step in creating a mini-narrative out of every action.

It goes without saying that all these skills can be obtained from other professions and experiences, but indie filmmakers (at least early in their careers, and sometimes throughout) do so many jobs that they are in the unique position to learn them all. Unless you’ve got Warner Bros. or the Koch brothers behind you, filmmaking and political activism are scrappy, DIY endeavors, requiring you to constantly swap roles and learn new skills on the fly. Which brings me to perhaps the most valuable asset I learned from indie filmmaking: the realization that you don’t need anyone’s permission to do something big. Who am I to ask people to follow me? What makes me think I can do this? My first day on set as a director was terrifying because questions like this kept creeping into my head. I realized I had to get over that real quick, or there’d be no movie. Call it courage or bravado (or egotism?), but I’m certain I wouldn’t be doing this now if I hadn’t learned that lesson. It’s what discourages otherwise politically passionate people from becoming organizers, people who I tell, “You don’t need anyone’s permission to do this. Take the first step and others will follow you.”

There is one more characteristic specific to indie filmmakers that’s worth mentioning. Unlike established or mainstream filmmakers, indie filmmakers don’t necessarily live in big, coastal cities. They may be voices of progressivism and empathy in districts of conservatism and xenophobia, which makes their potential contribution that much greater. My friends in New York and L.A. are just as politically passionate as those of us in Trump country, but there’s a feeling of powerlessness — there’s no one there to take the fight to. I’ve come to almost consider it a privilege to live in a place where my voice carries further, and an obligation not to squander that advantage.

Maybe someone reading this neatly fits this description. Someone with similar concerns, who learned a similar skill set from the same profession. Someone who has been on the fence about getting involved in a leadership role. I know I don’t have to tell you, you don’t need anyone’s permission.