Melissa Stephens is a comedian, actor, writer and director from the peach state. She studied at the American Academy of Dramatic Arts and after graduation she relocated to L.A. She is a founding member of IAMA Theatre Company, performing in the world premieres of Leslye Headland’s Bachelorette, Reverb and Cult of Love. Her directorial debut, Peen, was a Vimeo Staff Pick, and she writes and directs the short series Finding the Asshole, which was chosen to show at Slamdance 2019 in the Episodes program. Her latest short, Travis, is now available online. (Picture by Christopher Stewart.)

I am a comedian, actor, writer and director. Before booking a role on Californication, I had only done one Budweiser commercial and that was the extent of my experience on camera. Raised in Georgia and trained in New York City, I’d moved to Los Angeles where I was performing at the Groundlings and UCB while doing plays with IAMA Theatre Company. I auditioned for the role of Peggy in Season 4 of Californication. While rehearsing for a play, I took a taxi to the audition (yes, it’s possible to not have a car in L.A., and I did that for eight years). Word on the street from my then-agent after my audition was I should have worn more makeup, but I still got it. That gave me faith; in my humble opinion, if you’re right for the part, the rest just doesn’t matter as much.

I was pretty nervous on my first day on Californication, but I quickly learned no one will kick you off a set if you have no idea what you’re doing. When I started filming on my first episode of the show, I didn’t know anything, including the lingo. Like, nothing. I didn’t know what “first position” was, and when or if we rehearsed … During my first scene, I remember feeling like the kids in Willy Wonka and the Chocolate Factory (1971 Version) when they go through that tunnel on the chocolate river. Everyone is staring at all of the images with confusion and fear, some people crying or screaming or laughing. That is how I felt walking around the set. I was terrified I would forget my lines or fall in the stilettos they gave me to wear. I finally started to loosen up when I had to get naked and scream insane things. Nothing really gets you out of your head more than that.

Before I started shooting, a close friend calmed my nerves by telling me, “Everyone doesn’t know how to do it at some point in their careers, but when they walk through it, they learn.” I could get on board with that, imagining everyone was as inexperienced as I was at some point in their careers. I relearned this lesson when I took my leap into directing. I had been terrified about it, but I had coffee with a friend and she said, “You have so much experience – think of all the sets you’ve been on as an actor.” I realized nobody knows anything until they get there. It’s OK to say, “I don’t know.” It’s OK to ask questions; there is no detention in the TV industry.

My actress-producer friend Christine Woods recently told me that when she goes on sets as a guest star or recurring role, she owns her space, introduces herself to everyone and asks questions. I totally agree with this and try to practice the same. It can be difficult when walking on to people’s sets where they have dynamics after working together for years. I mainly have done recurring or guest star roles, so I have gotten comfortable with being uncomfortable on sets. That’s my motto in life at this point: Get comfortable being uncomfortable. Stand-up comedy will teach you how to feel that tout suite just like a cold plunge pool will. One of my favorite experiences on set was shooting an episode of House of Lies. We laughed a ton and I knew a lot of people from comedy there. The same thing happened on Black Monday recently, when my best friend and former roommate Leslye Headland was directing a couple episodes that I was in; I got to watch her work and act with friends I had known for years in comedy. (If you haven’t noticed a theme yet, the people at Showtime might be my biggest fans. The feeling is mutual.)

When we we were shooting the Season 4 finale of Californication, which was the last episode in my character’s arc, something happened which has always stuck with me. It was a big dinner scene (see featured image), and the brilliant Adam Bernstein was directing. He wanted a Robert Altman-type vibe for the episode. I was so nervous – more nervous even than during my nude sex scenes. I was shooting with people who were famous. I mean, I had to kiss Rob Lowe … It was a lot, but I remember in between takes, Rob and David Duchovny were talking to me and David said, “You seem like you’re really having fun.” I was sort of confused and I think I just said something like, “Yeah, I am.” Then David added, “Not everyone is like that and it’s refreshing to be around.” This was so weird to me because I was in a room full of very successful actors and I had guessed we were all having fun. So, I like to remember to be and bring fun to the job, especially when I’m directing. “I’m not curing cancer” is something I say to myself a lot on set. That doesn’t mean I’m not taking things seriously, and of course there are tough times, but even in those difficult moments, I try to enjoy myself.

Lastly, I learned how to shoot extremely delicate moments like nude sex scenes in an appropriate and professional manner! I am very grateful to Adam Bernstein for setting the tone on the set of the first thing I did naked. I would not change a thing about that experience, even if I still get dick pics from strangers on the internet because of it.

So yeah, get naked, have fun and know nothing….

P.S. I don’t know if P.S.’s are a thing in articles, but I’m doing it anyways. The best thing I have learned on all of my sets is they never change; sets are pretty much always organized chaos. The thing that has grown is me. The more I trust myself and have self-worth, the better the experience for me, regardless of what I might not know. You can still have self-worth and trust in yourself and know nothing, or fail miserably or whatever in between. Bringing it home again with getting comfortable being uncomfortable.

Melissa Stephens is a comedian, actor, writer and director from the peach state. She studied at the American Academy of Dramatic Arts and after graduation she relocated to L.A. She is a founding member of IAMA Theatre Company, performing in the world premieres of Leslye Headland’s Bachelorette, Reverb and Cult of Love. Her directorial debut, Peen, was a Vimeo Staff Pick, and she writes and directs the short series Finding the Asshole, which was chosen to show at Slamdance 2019 in the Episodes program. Her latest short, Travis, is now available online. (Picture by Christopher Stewart.) 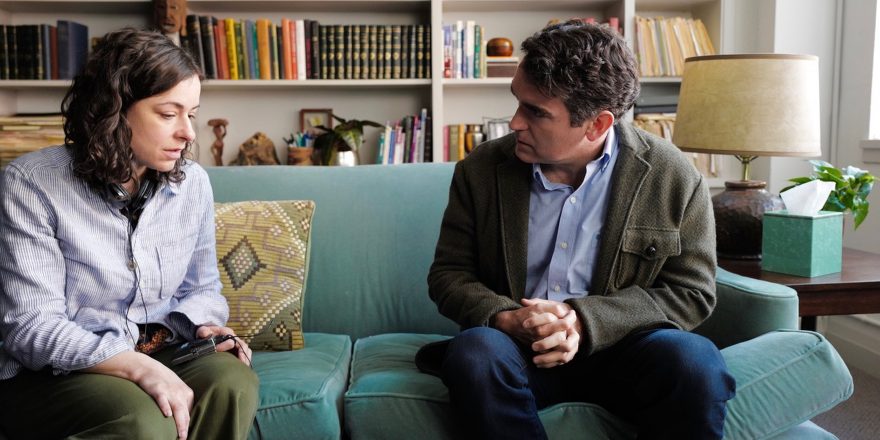 What I Learned Working On If Beale Street Could Talk