“We all long to escape our own subjectivity. That’s what art can do, give us a glimpse of ourselves connected with every human, now and forever, our disconnected, lonely terms escaped for a moment … But what the televised bombardment of violent events did to me was completely different. I didn’t overcome my subjectivity; rather, my person got stretched to include the whole world, stretched to a breaking point. I became pervious, bruised, and annihilated.”
– Dana Spiotta, Stone Arabia

In June 2013, freshly moved from the West Coast to New York City, I began working at Vimeo as a content/community manager and support specialist. Working in their Frank Gehry-designed Chelsea headquarters, all clean glass twisting skyward like a beehive, it seemed like I had “made it.” It had been a hellish couple of years out of film school, and to nail any position here felt neatly adjacent to my ambitions as a director. A reliable paycheck with benefits to comfortably sustain me and my partner didn’t hurt, either.

However, the cool startup office culture I absorbed during my first days of training would have to tide me over for some time. I had taken a position working from home, on the night shift. From 6 p.m. to 2 a.m. every weeknight, I was tasked with troubleshooting technical issues, watching videos to surface for our curation team, and, most consequently, moderating flagged content.

Anyone can flag a video for removal on Vimeo, for whatever reason they want. Sometimes it’s a clear violation of the Terms of Service. At other times, it’s more of a nuanced judgment call. Given that Vimeo is an open, global site primarily for artists, the question of acceptability can’t be determined by an algorithm. It requires a human eye.

Working that shift, I found myself in an infinite scroll, a soon familiar monotonous rhythm. It was not explicitly stressful in the way some other jobs can be, but it began to feel Sisyphean. There was just too much to see. I could feel my brain start to atrophy. I was on my couch, late at night, lonely, desperate for anything to wake me up.

And then something beautiful would happen. Sometimes, I’d stumble upon a video so bizarre, so off-the-wall, so completely unmoored from my sensibilities that it would shake me up. I come from the fairly milquetoast tradition of American independent cinema — I thought I had a good handle on what was out there, where scenes had developed, who was making what. But this was something else.

I kept digging. I punched in the most oblique search terms, learned who to follow, and patiently swept the mustiest, dingiest recesses of the site. I found a whole underbelly of artists creating work solely with the internet in mind. Masterpieces with fewer than 100 views.

My discoveries included aching memoir pieces and soothing, meditative CGI, confrontational video art and amorphous animation. Formally aggressive, adventurous, unpredictable moving images that didn’t so much as follow a particular medium or style, so much as shared a distinct sensibility. This was different from work I’d seen by gallery-represented artists, more out-there than films in “WTF” shorts programs at festivals. It was strange in a different way, strange like only the web is. It felt like a new way of seeing. As I wrote for the Vimeo blog in 2015: “[This is] work either informed by the aesthetic of the Internet, or created under the context of technology disrupting not just industry, but our culture, social lives, and even our bodies … an ecstatic exploration of what it means to live right now.”

I started a channel called D E E P V I M E O to compile and share my findings. I was able to bring together an underexposed, subterranean community of artists working on the site, and put a name to what they were doing.

Through this, I developed a monthly shorts series in Brooklyn called D E E P, which has been going strong for two years now. It is one of the great joys of my entire life, building an IRL theatrical space for all of these incredible URL artists, something which never would have occurred had I not been tasked with excavating a website I love every night of the workweek.

This job gave me D E E P, and the overwhelming sense of community and purpose it provides. And it also broke my brain completely.

After D E E P screenings, I would constantly be asked one question: “Do you ever see any really fucked-up shit?” Usually in hushed tones, with an anticipatory chuckle, leaning into me, awaiting a secret.

I pulled up the bookmarks in my brain. I described the incredible video of a nude German man greenscreened over Mortal Kombat footage, mock-fighting Johnny Cage and helicoptering his dick to EDM. I mentioned Frank Moore, the quadriplegic performance artist who staged subversive pieces with young women bouncing in his lap as he shook from cerebral palsy. I even brought up the man making a documentary for God (not about God… for God, as if he were divinely contracted for the job). Hundreds of hours of footage uploaded to his account, shaky Flipcam footage, mostly addressed to an empty sky — a stuttering, one-sided interview with the Creator about metaphysics, theology and quantum technology. I chose to prune other details: his creepy, leering shots of children, the anguished monologuing about his family, the rare glimpses of an exhausted older caretaker, who appeared to be his mother. I didn’t talk about that.

I also avoided talking about the other videos I saw. The ones less fun to discuss after screenings, or at parties. The ones that kept me pacing around the apartment until my partner woke up in the morning.

Did you know that there’s no horror soundtrack before a cinder block is dropped two stories onto a stray cat? Just the sounds of Ukrainian teens laughing. There’s no cathartic reaction shot of someone gasping in terror when a journalist is beheaded by extremists, or when someone commits suicide on a livestream. Except for, perhaps, what my webcam would have seen as I closed out of the tab in a panic.

There’s no cinematic device to portray the queasiness of determining if this particular collection of home videos has been uploaded by a loving parent, or by a predator of children. Nor the anxiety of watching virulently racist propaganda. Nor being blindsided by something unspeakable hidden behind a title of random numbers.

There’s no way to console a woman who has discovered footage exists of her having sex, anonymously uploaded with her full name — and employer — in the description. You have to hide behind corporate pleasantries. “We are terribly sorry that this happened … We take these matters very seriously…”

I wouldn’t talk about it, because I felt that no one should know. I will never recount the worst videos I saw, ever. I saw them so no one else had to.

This panopticon view, where terror hid within tedium, left its residue on my psyche. Ghosts haunted these images: the ghosts of the victims captured, the ghost of the cameraperson, and the unknowable figure who uploaded the footage, unearthed from some deeper chasm, a message board, a .onion link. Some nights I dreamt of falling down an endless scroll, like a bottomless pit, where each brick I passed was a screen showing another atrocity.

My supervisors positioned moderation as a social good, something to seek solace and take pride in. When I confided in a coworker about the panic attacks, the nightmares, the random bouts of crying, she told me she coped by assuming everything was fake. The only way to carry on was to fictionalize and compartmentalize.

“I have to make myself believe that it’s just not real.”

As well intentioned as this was, it made me feel guilty complaining about the havoc it wrought. If my coworkers could adjust, why couldn’t I? And what position was I in to whine? After all, my other friends worked longer and harder and were paid a lot less than I was to watch videos and write emails all night.

So I didn’t talk about it.

I know the creation and dissemination of violent images is not the same as physical violence. I understand the value of reminding privileged people (like me) of the world we created and continue to benefit from. And, of course, my witnessing violence, decontextualized on a screen, is in no way similar to having it actually inflicted upon me, or even watching it unfold in front of me.

My pain is not the same pain. But it is still pain. As the novelist Dana Spiotta writes: “That’s what it feels like, this debilitating emotional engagement — annihilation, not affirmation.”

To behold the grand swath of the internet is like encountering the Borgesian Aleph — a point which reflects all others, from every angle of the universe. All preconceived binaries fracture, all value judgments disintegrate, and you’re left with a disorienting, prismatic, unrelenting view. The void again: you do the looking, and it looks back at you.

While I have not yet completely grappled with what I saw as a content moderator, the art I’ve found through my work at Vimeo, and the creation of D E E P specifically, has soothed me. I sense the answers I’m looking for may lie, like an encrypted message partially decoded, in this new movement of artists who can absorb the Aleph view of the world, and construct new ways of seeing, new ways of living inside it. Curating D E E P reclaimed the nastier parts of my job, and imbued my eye with some semblance of hope. At the very least, this little enclave of online possibility makes me feel like it was all worthwhile.

I am the biggest believer in the internet. I also know that it’s evil. I don’t know where I would be without it. 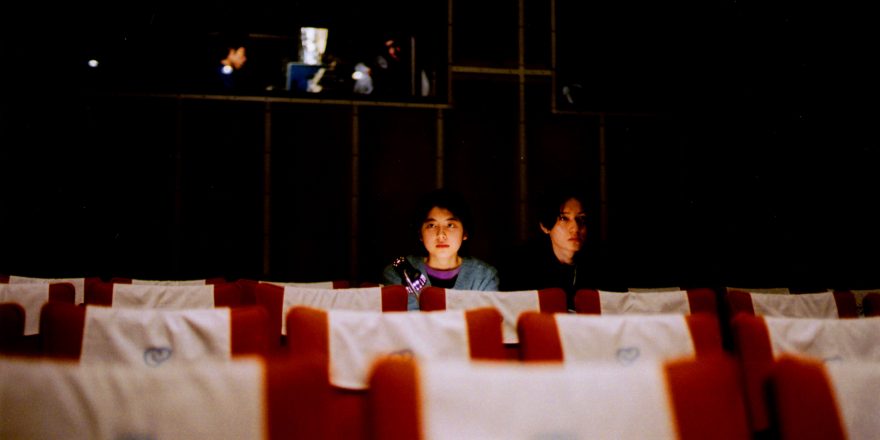 You, Me, and Hirokazu (flickering memories of a conversation in my head)