Christopher Radcliff is a New York-based filmmaker originally from Pittsburgh, Pennsylvania. His work includes the award-winning short films The Strange Ones (co-directed with Lauren Wolkstein) and Jonathan’s Chest, which have screened at hundreds of festivals worldwide including Sundance, SXSW, and Rotterdam. His first feature film, The Strange Ones (an expansion of the short film), was released in 2018, and was named by John Waters as one of the top 10 films of the year in Artforum.

The Terror, AMC’s nautical horror series about two ships full of white men who run afoul of a monstrous polar bear while shipwrecked in a land of Inuit mysticism, might actually be the perfect example of the type of show we need – now, and for the future.

Why, though? Its surface pleasures are easy enough to grasp (but perhaps easy as well to brush past in an overcrowded television landscape): it is a tense, supernatural-tinged survival thriller, an impeccably produced historical drama, and an engaging male-focused character deconstruction. However, a closer look reveals The Terror to be something more rare: a cable television show that manages to embody a refreshingly clear-eyed anti-colonialist sentiment that feels neither forced nor polemical. Rather, it is wholly ingrained and constitutes the core of the show’s rich and multi-layered dramatic construction. It’s at the heart of the initial sin that gives birth to the show’s narrative conceit, and it is what continues to escalate the characters’ predicament at each of the story’s turning points, as the crew of this ill-fated voyage struggle to survive their expedition and return to the comforts of their homeland, England.

To briefly recap the premise of the show for those unfamiliar, The Terror is a fictionalized account of what happened to the crew of two real ships, the HMS Terror and the HMS Erebus, which vanished in the 1840s while attempting to chart the Northwest Passage and open up a new trade route from Europe to Asia. An adaptation of the 2007 novel by Dan Simmons, the show takes the form of a psychological thriller-cum-horror story, charting the crew’s struggle to survive a mounting combination of threats – the severe cold, the barren terrain, the lead poisoning they find coming from their tinned rations, and their own worst impulses. To top that off, they find themselves being stalked and methodically killed off by an elusive supernatural creature (that monstrous polar bear).

I was compelled to watch the show initially because I knew of the book and the underlying true story of the disappearance of the ships – which were actually discovered in 2016 and 2014, respectively. I probably expected nothing more from the show than to be an intriguing piece of British period-prestige, and initially that is what I got. But it was around episode four that the show’s rich thematic undercurrents became more apparent to me.

Consider this episode. “Punished, As a Boy” is its darkly intriguing title. Being episode four out of ten, it comes at a curious fulcrum point, and may appear to be mere stage-setting filler in between larger, more arresting dramatic landmarks that occur in the earlier and later parts of the series. But the central action of this episode brilliantly expresses the show’s larger concerns, and even in quiet moments begins to sketch its overall thematic vision. [SPOILERS AHEAD] After the surprise killing of the ship’s captain in the previous episode, Petty Officer Cornelius Hickey (Adam Nagaitis) has taken it upon himself to capture and bring back onto the boat “Lady Silence” (Nive Nielsen), the Inuit woman who he believes has some nefarious connection to the Tuunbaq – the bear-like creature which has been killing the ship’s crew members – ever since they accidentally shot and killed her shaman father. 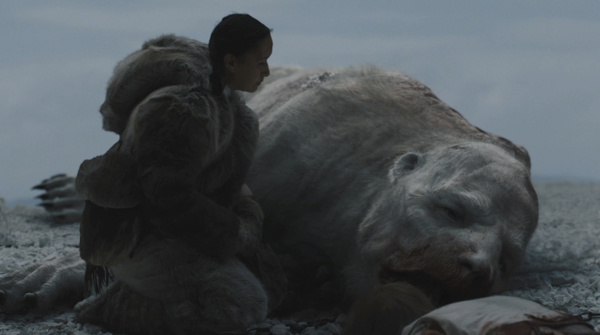 Perhaps circumstantially, it is totally natural for Hickey (who emerges as the show’s ultimate expression of the evils of the imperialist mindset) to assume that this woman is some kind of evil sorceress with nefarious designs for revenge. The same goes for the men on board, especially after hearing Hickey’s description of her mysteriously close interaction with the Tuunbaq that he purportedly witnessed. That they are so completely, tragically wrong, is part of what makes The Terror such a devastating dramatic experience – the narrative shows them no mercy for their limited worldview, rather it punishes them without consideration, as the natural world would.

In the very telling final scene of this episode, there is a quietly remarkable one-sided conversation between the captive Lady Silence and Dr. Goodsir (Paul Ready), who is perhaps the only person on the ship who doesn’t immediately fear and hate her. He brings her dinner – soup, salt pork, and a small chocolate.

“That’s as a good a meal as you’d get at the ladies grill room at the Holborn. In … in London. Where we live,” he says. This, of course, means nothing to her. To her, the food is disgusting. As he speaks, her silent facial expressions range from confusion to defeated sadness. He continues, desperate to communicate, even though he knows she doesn’t understand him.

“I heard what happened to you tonight, from Mr. Blanky. I’m sorry, for all of it. He told me your language is called Inuktitut. And that this region here is called Nunavut. Inuktitut and Nunavut – I like those words very much. I’d like to learn more.”

During this stretch of dialogue, something quietly violent happens: the edit crosscuts to a nearby crew member who is standing guard outside her quarters and listening in, appalled by Goodsir’s kindness, disgusted by his attempt at communication. It is easy to miss, but this brief moment is a remarkably subtle, yet painfully sharp reminder of the men’s hostility to their surroundings and to the foreign other, whose territory they have invaded. Goodsir continues:

“You must wonder what we’re doing here, in your part of the world. We are from England … very far away. We’ve come here to find a way through to China, and India. A victory for the Empire it would be, to find a way. Passage. A northwest passage. For our economy. Trade.”

Goodsir gradually realizes as he says these lines how silly it all sounds – how ridiculous it must be from her point of view, even if she could understand his language, to hear things like “a victory for the Empire,” “for our economy,” and “trade.” How her home is but a mere “passage” to them. The subtle way the scales fall from his eyes as he speaks (exceptionally performed by Ready) mirrors the increasingly tangible thematic dimension that undergirds the show, and its gradual deconstruction of the expedition’s colonialist aims.

Now, fast-forward to the very end of the final episode of the series, “We Are Gone.” Years after the main action of the story, our protagonist, Captain Crozier (Jared Harris), the last survivor from either ship, has assimilated into the local tribe. When a party of Englishmen arrive looking for him and any other potential survivors, he chooses to hide from them, and instead tells his Inuit leader to issue them a faux-posthumous instruction/warning to abandon their search, leave this place, and never return. The final image of the season is of Crozier, sitting sentry with a sleeping child in a vast, unending landscape of ice.

At first, this ending may be stunningly difficult to reconcile for the viewer – after 10 episodes of the men constantly dreaming about returning to England, reminiscing about it, decrying the harsh surroundings, why wouldn’t Crozier run to his English saviors, and jump at the chance to return to his homeland? And beyond that, why wouldn’t he run after Silna (aka Lady Silence), after her exile from her tribe, the reason for which he doesn’t understand? While seemingly frustrating in many ways, Crozier’s actions make complete sense: he has finally surrendered fully to this place. He has abandoned his colonialist mindset, and his final action of the series – to try to keep his fellow Westerners away from the land his crew unsettled and were punished by – is an act of respect and protection for the environment that he now inhabits, on its own terms rather than his. The tribe leader instructs him, and the audience, as such, stating: “Everyone accepts this. You must remember where you are, and accept this, also.”

Remember, the HMS Terror and the HMS Erebus were real ships. For years undiscovered, they were long a historical unsolved mystery. Even now that they have been found, the fate of the crew and the details of what led to their demise are unknowable beyond the basics. That the creators behind The Terror ultimately and so elegantly manage to retrofit this historical mystery as being the product of an act of anti-colonialist preservation, however futile, is something to admire.

That a piece of work as artful, intelligent and uncompromising as The Terror made its way to air is likewise worthy of appreciation, and likewise that it’s been greenlit for a second season. Personally, I’m hopeful that the creators will approach it with a similar tact, especially given the captivating setting they have chosen: the Japanese-American internment during World War II. Perhaps it’s particularly resonant for me because as a biracial Asian-American filmmaker constantly contemplating issues of representation, ultimately my goal is to find a way to work that is both creatively unfettered but also thoughtfully aware and reflective of my own sociopolitical views and experiences – and a show like The Terror is proof to me that this is possible. It’s a great example of how outwardly traditional genre material can be heightened tremendously by such conscientious, thoughtful storytelling.

Christopher Radcliff is a New York-based filmmaker originally from Pittsburgh, Pennsylvania. His work includes the award-winning short films The Strange Ones (co-directed with Lauren Wolkstein) and Jonathan’s Chest, which have screened at hundreds of festivals worldwide including Sundance, SXSW, and Rotterdam. His first feature film, The Strange Ones (an expansion of the short film), was released in 2018, and was named by John Waters as one of the top 10 films of the year in Artforum. 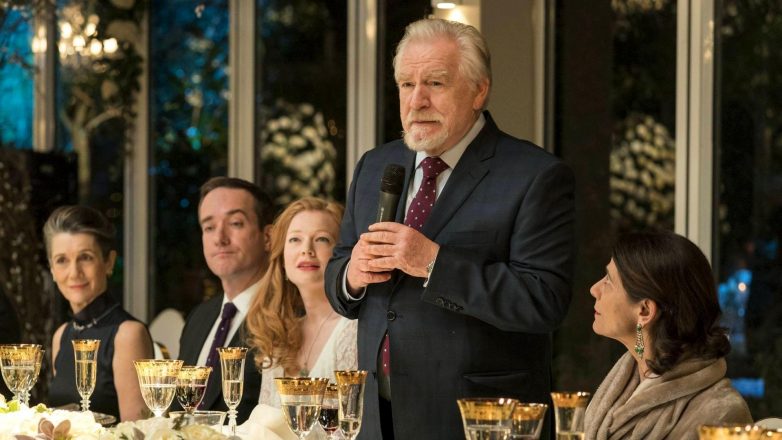 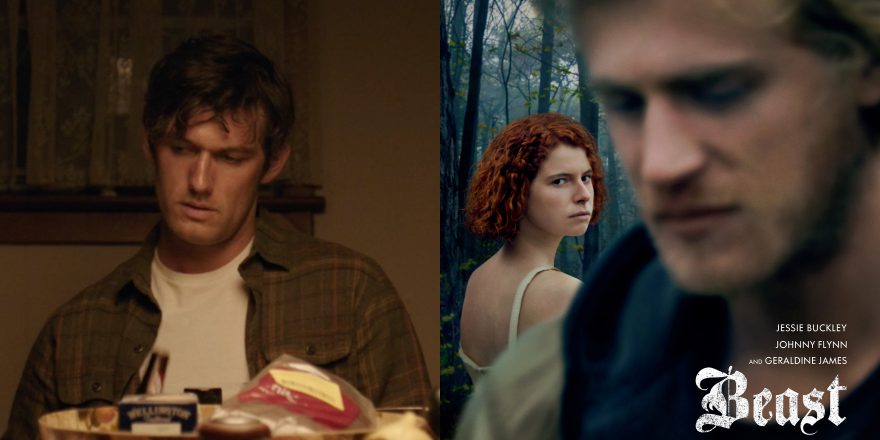