When I was a kid, print magazines were my favorite things. I just loved getting mail. I had like 10 subscriptions and I would sell them for Cub Scouts and build up points and get some for myself. So I’ve recently started getting back into print magazines. I re-upped my subscriptions to The New Yorker, The Atlantic, Wired.I discontinued a bunch when I moved, and I missed them. I thought it would be fine to read on an iPad, but I love the tactile feel and the smell, and I love getting shit in the mail.

I also love how specialized some of them are. I started getting into running, I’m getting ready for a marathon. I got Runner’s World, which is a relatively niche magazine — like Modern Drummer, which is another one I get. But I like how there’s even more specialized, crazy magazines. Maybe some of those have left the print world, but stuff that’s super niche is great. Tape Op is another great one, and it’s free. I think it’s just ad supported. It’s always been free. I was thinking about all the magazines I got as a kid, and how I saved them all. I got Ranger Rick, Boys Life, Nintendo Power—which I was featured in once for a high score, I think on Gradius, the Konami game. I got Consumer Reports For Kids, Sports Illustrated For Kids…

If you’re reading an article on your phone, notifications still pop up. It’s a diluted experience. It forces you to unplug. Similar to listening to physical records, the active thing of purchasing something and putting it on makes you listen with more intent. And I think the same holds true with books and print magazines. It feels like a prize. They’re also great to read on the toilet. I have a problem with people reading their phone on the toilet, then you carry it around and touch it all day. Once a magazine moves to the bathroom, after that it gets discarded.

The first Albert Brooks movie I saw when I was a kid was Defending Your Life, which was absolutely mindblowing on a conceptual level. But as I got more into his brand of neurotic comedy, which obviously has commonalities with people like Larry David, I started exploring some of his early movies like Modern Romance and Real Life. And then I revisited Defending Your Life. Lost in America is another one. Mother is awesome. They’re all on Criterion and I’ve been rewatching them again.

In Modern Romance, there’s this famous scene that’s essentially just a long, neurotic monologue. And I definitely see myself in that — that’s definitely how my internal monologue is if I don’t keep it in check. I try not to be that neurotic. It’s debilitating! In that film he plays a film editor. He always creates characters that are somewhat similar to what he does in real life. He’ll play an ad exec. In this one he plays a film editor, and the interactions between the director and editor are spot-on. It’s very similar to when I’m working with directors or showrunners — not the great ones that I work with! But the passive-aggressive exchange of ideas. In the movie, a director invites him to a party because he wants to talk about his movie — that has happened to me. People wanting to hang out in a quasi-social setting, but it’s really because they just want to talk about their own work. I also think it’s funny that he always has a stunning leading lady and always drives a badass car in all these movies. It’s always a Yuppie thing, which is funny to me. I don’t think he’s necessarily doing it to be ironic, he’s just embracing it: It’s my movie and I get to be comfortable. This is what my guy would drive!

I’ve heard it described as the Hedonic treadmill, where you keep acquiring stuff… In two of the movies, he’s buying a new car — in one it’s a Mercedes, and another he buys a BMW and crashes. That whole attitude of, “Maybe this will keep the existential dread at bay for a few minutes, if I spend money on something really nice.” Obviously that’s how commerce works! I think it’s one of the driving components of our whole civilization. We’re these essentially fragile beings, and we have knowledge of that, and to mask it we come up with all these weird distractions. None of those external markers came out of himself, and that’s where the problem is. I find that relatable — not to the same degree as the characters in the movies, but it’s hilarious. I have everything I need to do my job, but I’m constantly buying new stuff, ostensibly to be keeping up with the state of the art. That might be true to a certain degree, but it’s also true that Sgt. Pepper’s was recorded on a four-track — I don’t need all this shit.

The podcast I do is kind of an antidote to that. A lot of people thought that a podcast featuring drummers would be talking about drums the whole time, or gear. I actually think the podcast would be more popular if I did that, based on YouTube things where people talk about gear. But to me that’s not as interesting. It’s almost as if you had authors on a podcast and they only talk about their pens or typewriters. Why do we talk about gear so much in this world? Isn’t it about the ideas or the life lived behind the ideas? I think the reason people talk about gear — it’s like a musician’s way of talking about sports. It’s a neutral topic that’s not as vulnerable, and it’s a way to bond without getting too personal. And it’s a distraction from sitting with yourself. If you have everything you need, you have to dig into the work. Do authors buy new typewriters every year?

I think of The Trap Set as a ladder that pulled me out of a well of despair, and each conversation was a rung in that ladder. It made me realize how disconnected we are from our natural inclination to just connect and speak to other people, and how rarely we actually have substantive conversations face to face. We’ve probably evolved as a species to do that, and the technology has evolved faster than our biology has in many ways. We’re not engaging in a verbal way as much anymore. As convenient as texting is, it’s no substitute for sitting down and asking somebody about their day or their life. I found that engaging with people on that level was incredibly soothing to my soul. Music itself is obviously a social art form compared to many. Musicians need each other to make things, and then you perform it in front of people. If you’re a sculptor or author you can labor on your own and then put it out into the world without having any sort of interaction with the people that you’re making the work for. Or with the larger world, if you’re making it for yourself. I think there’s a parallel in having conversations.

It’s been great during COVID to continue doing the show. For the first month and a half or so I was doing daily episodes, just calling people on the phone. Absent the ability to go out and play music or go to shows, it scratched that itch. It makes me feel more alive after I just listen to somebody for an hour. That bleeds over into non-musicians, just to friends. I’ve been having long phone calls with people again, which is great. It makes me want to get a landline and ditch my cell phone. That’s my fantasy, to just have a landline and no cell phone and have somebody else check all my emails and just print the ones I need to respond to. They could send them in one of those old tubes into my office, and then I’ll respond with written responses and they can type it up. Didn’t they have that in the Hudsucker Proxy? It seems kind of Cohen-ish. There was a building we lived in downtown that had a system like that, but it wasn’t operational, alas. As a kid I was a computer enthusiast. I’m not anti-technology, but I do think the technology is getting more powerful than my brain and hijacking me. 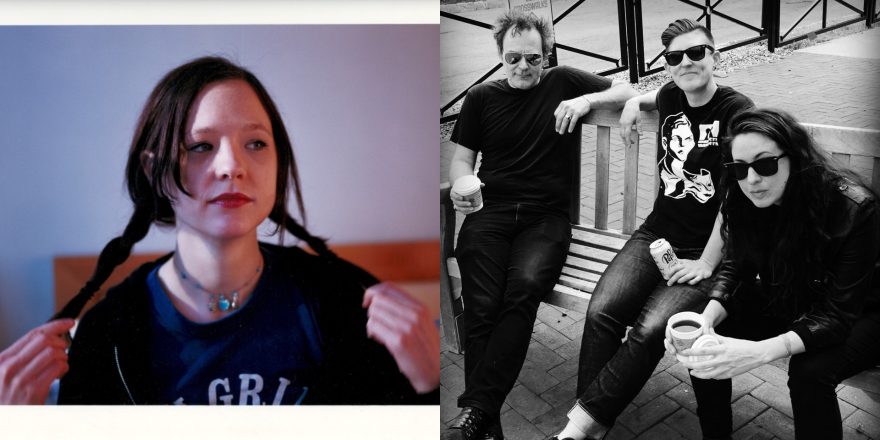