Aly & AJ is LA-based sister duo Alyson and Amanda Michalka. They recently released their singles “Attack of Panic” and “Joan of Arc on the Dance Floor” were released earlier this year and they are recording a new album now.

AJ: We find that the most comforting band out there lately is The National — as a live act, recording act, and just as human beings. We recently watched their documentary, which Aly had already seen and I had not.

Aly: I was like, “I’ll watch it again!” AJ was blown away by it. It was just so touching to see during these times — and seeing what they’re doing on their website, donating proceeds to their crew who would normally be touring during this time. It’s a really thoughtful element that they’ve added into their business model that AJ and I look up to. I think it really says something about how they’re handling this moment. Like how they did that concert aid where they were livestreaming and responding in real time to people watching it.

AJ: It is really cool. Aaron Dessner did this really awesome collaboration with Michael Stipe over Zoom — I’m pretty sure they wrote everything in isolation, and already put it out. It’s amazing that they’re not only thoughtful artists, but they also move really fast. They’re all about the art. They’re just very real in the way they approach they music, and Aly and I really find that endearing.

We had seen Mistaken for Strangers — which is the documentary Matt Berninger’s brother did on him back in 2013. It’s pretty amazing — right before isolation really hit. We were like, “Alright, love you, see you on the other side!” It was interesting, because we’re two siblings who have done everything together our whole lives, and these are two guys who kind of — from what I can tell from the documentary — don’t have a ton in common. Tom isn’t a musician, and Matt has obviously blown up from this band. They’re from a fairly small town, with super humble parents; they’re brothers who you can tell are close, but don’t have a ton in common. I mean, I don’t know them, but I’m guessing from the doc.

You can see that Tom didn’t really know what he was doing when he made this documentary, but ended up making something really beautiful with Matt’s wife [Carin Besser]. It’s a family affair that really spoke to Aly and I, especially being that we made a film together living in Laurel Canyon a few years ago called Weepah Way For Now that was based on our relationship as sisters. Here they are making a doc as brothers, basically going on the road with this band for the first time, and he’s like, “Alright, I’m just joining my famous brother and his band of guys, they’re going to hit the road for 60 dates and I’m going to follow them and document everything!”

It was interesting to see that Tom is the guy who’s not the golden goose — he’s not in a band, he’s not famous. It would be like if Aly and I had a sibling that wasn’t involved in our career at all and then made a documentary about us. I just found it really endearing and lovely. The brothers didn’t show any jealousy — Tom was kind of in awe of Matt and the other band members, and he just wanted to tell the most beautiful story he could.

Aly: It’s just a reminder that family is really so important, especially during these times. I think people are gonna come out of this and be so grateful for their family and their health, whether they were able to spend it with their family, or away from their family, I think it’s a good reminder that your blood is so unique, whether those relationships are imperfect or not. Some people I know have trouble with their family, and they might not be close with them, and I understand that’s something you have to take case-by-case; some families might not see each other, and maybe that’s because they’re toxic relationships. But I do think that it’s a good reminder that family, whether you’re far apart or down the street, should be a priority in your life, if they are good and healthy relationships.

AJ: When it comes to disappearing from it all, I don’t do well binge-watching television, or watching something I consider to be kind of shallow. I’m not really into reality TV — there’s nothing wrong with it, it can be total entertainment for someone during a sad time. But for me, I’d rather listen to people that bring depth to my life. I find The National’s songwriting to be extremely deep, and very gratifying. I also find acts like Beach House and Orville Peck — musicians who are making kind of sad tracks — kind of comforting, in a way. That music is healing to me. I’m not someone who’s going to put on a giant pop record right now, even though we’re pop artists.

Aly: It actually sounds so weird to think of doing that. Even though I know there’s people at home who are dancing to music that makes them feel good, but that’s very much not my personality, and I don’t think it’s AJ’s either.

AJ: It’s so funny that we’re the same like that.

AJ: And it doesn’t mean you have to sit in the sadness — it’s just the current state we’re all in, and I’m going embrace it at a level that respects it.

Aly & AJ is LA-based sister duo Alyson and Amanda Michalka. They recently released their singles “Attack of Panic” and “Joan of Arc on the Dance Floor” were released earlier this year and they are recording a new album now.

Aly & AJ
Matt Berninger
Mistaken for Strangers
music other
the National
The Way We Get By
Tom Berninger
Introducing: Night Shop’s “The Cafe of Eternal Youth”
Write Ugly, Edit Pretty 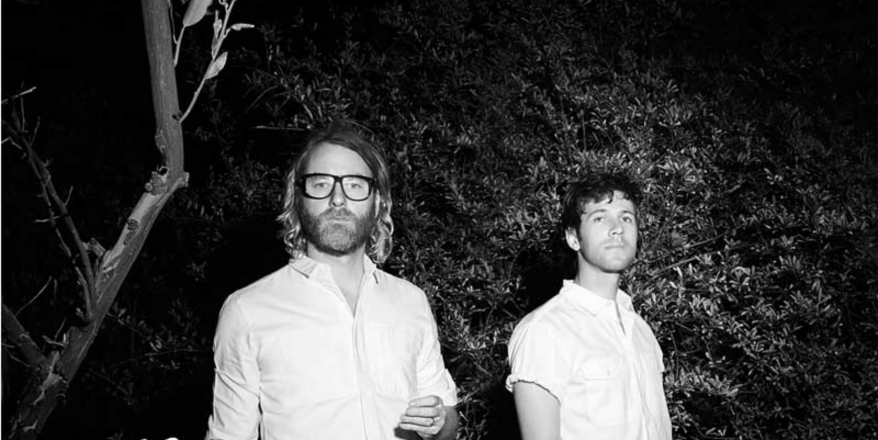