Adam Voith is a booking agent at WME in Nashville, where he represents a small roster of world-class badasses. Long ago, before the business of music took center stage, Adam ran the mid-brow micro-press TNI Books which released work from writers and artists like Camden Joy, Damien Jurado, and David Shields, along with two of Adam’s own books. Adam has recently returned to his love for writing and published pieces in The Sewanee Review, Hobart, and an issue of the fictional zine “The Christian Humper”. Adam is working on a novel which lives in the Christian Rock world of the 1990s. You can find more on his website: adamvoith.com.

The first shows I booked were with Christian Rock bands in the early ‘90s, and so I’m complicit in the least cool American youth movement of all time.

For the past two decades, I’ve booked proper shows, outside the confines of religion. Most have been in dirty clubs, some in ornate theaters and fancy ballrooms, and even some — beyond my wildest early ambitions — in big-ass outdoor amphitheaters and basketball arenas.

It’s all very organized now, professional and practiced; guarantees and ticket fees, advertising designs and on-sale times, mileage limits for the bus drivers, deposits for the business managers, days off in the routing for promo, catering costs for the local crew, afterparty passes for friends, family, and lovers. It’s a whole thing. A job. A career.

But those first bookings were simple, noble attempts to get kids in Central Indiana to consider a select few Christian bands who could maybe, almost, possibly play toe-to-toe with normal, awesome, secular ones. It was a duty, my own quiet evangelism.

For the first show, my youth group was the audience I had in mind. By the second, more bravely, I aimed for my high school and other schools nearby; non-Christian kids. By the third booking, I sought to convert the budding heathens in my college town.

More honestly, in the first case I was trying to meet the pretty bass player in the band. In the second, I wanted to show the local punks that a Christian act could kick up controversy. And by the third, I badly wanted to hang out with Christian stoners. Here’s the first story, look out for the second and third in the days ahead.

The first time I saw Cole was on a youth group outing to a nearby amusement park. The trip was a tool for recruiting. Our numbers were bloated, padded with kids from families who didn’t go to our church, or maybe didn’t go to church at all.

As we loaded onto a chartered bus, I watched Cole walk down the aisle to the back row of seats. He had stringy long hair, cut-off shorts, and a Nuclear Assault T-shirt. He wore a tall-foam hat that read SHIT HAPPENS. It was astonishing. An ambitious young believer from our group had invited this near-Satanist along.

I didn’t talk to Cole that day, but a few weeks later at our church’s summer retreat, I spotted him again after the evening sermon. Back? For more religion? Everyone else had gathered for basketball or flashlight tag, but Cole sat alone in a sea of empty folding chairs. He had a pencil, and he was stabbing it over and over through the paper program from the night’s service.

He sniffed, rolled his eyes, and slowly sighed forever. “I should be at Danzig and Soundgarden. They’re playing Bogart’s in Cincinnati tonight.” Several of the words sounded made up, a foreign language or code, and the remainder of the retreat was chock full of more strange information and revelations. Cole was reluctant to share, like he had secrets to keep, but with poking and prodding, he let me in on tiny tidbits and other wild band names: Jawbreaker, the Mr. T Experience, Parasites, the Libido Boyz. He even had his own band called Decrepit. They’d recently broken up, but not before making two cassette demos complete with photocopied inserts with lyrics and liner notes!

Cole revealed vital shit happening right under my nose, wholly invisible to me up to that point, underground. He had cassettes and CDs with him, and a boombox with headphones which I put on during free time between meals, sermons, and break-out gatherings. He showed me a smudgy newsprint copy of MaximumRocknRoll magazine with pages and pages of reviews, interviews, scene reports, and advertisements for labels and bands. I asked dumb questions, and he told me half the answers.

And then, Cole got saved. It happened during a praise and worship session in the woods our last night there. Some kids re-dedicated their lives to Jesus. There were harmless confessions of not-so-bad things. People tried to speak in tongues, stumbling through the gibberish. Most people cried. I cried.

The final night of a retreat is a mystical motherfucker, intoxicating and seductive. Cole bought in, and after the service he torched his tapes and CDs in a late-night bonfire by the lake. He pulled them from his stuffed carrying case one by one and ceremoniously tossed them into the flames as we all sang “Our God Is An Awesome God” in the round, on repeat.

Hovering over the molten mess, face glowing and flickering with the flames, one of the outspoken and Spirit-filled seniors in our group said we should all loan Cole some Christian music or make him a mixtape of our favorite Christian songs.

I was conflicted. Newly turned on and fascinated by this hidden wicked world, I wanted to reach into the fire and pull the music out, run back to the bunkhouse where we slept, and hide the rescued treasures in my luggage. But I also wanted to save a soul, so I let the records burn.

Back home, my mom drove me to the Christian bookstore at the mall, and I went through the CDs they stocked. I didn’t know exactly what I was looking for: Was there a weird Christian band? Was there a cool one? The guy behind the counter was probably 38, so to me he seemed a hundred years old. The pleats in his pants, the shape of his hair, and the print on his tie all told me there was no hope of help from him.

I settled on an album by an artist called The Throes. It had flowers on the cover, and used a frilly, arty-farty font. It looked like a record by The Cure, but I didn’t know that at the time. I bought it for my freaky new friend, called him up, and asked if I could come over. 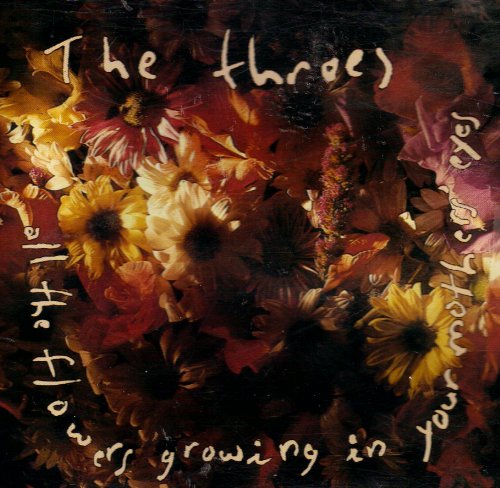 Cole’s bedroom was stark, and dark. Inside was a single bed with a black comforter, black sheets, and black pillowcases. The room’s single window would’ve looked out onto the neighborhood, but Cole had super-glued the blackout shade to the frame. You couldn’t see outside, ever. A dresser with deep, dark stain had nothing on top but a black stack of stereo components and two plastic speakers. The album art for The Throes was really the only color in the room.

It might have been a lucky pick, or maybe my knack for finding talent was blooming early, but the album ruled. We put it in the stereo and played it on repeat. The easy comparison is that they sounded like R.E.M., but we didn’t know that at the time.

As we listened, I fixated on a headshot in the insert of a girl that was captioned BASSER. The tiny picture was nestled into the crowded lyrics, album credits, and three other photos of the rest of the band. She had bleached blond hair, bright red lipstick, and thick dark mascara. We fell for the music, a win for my newly saved friend and me, but I also fell for that photo of the bass player.

Our youth pastor was a young guy with a hot wife who still used her own last name. He was just out of college, not much older than we were. He was inquisitive, and deeply steeped in early-to-mid-career U2 albums, that universal gray-area band you could justify even to the strictest fundamentalist. He had us reading poetry, talked about meditation and, eventually, he got fired. The rumored last straw: his wife speaking to a prominent congregant’s daughter about her unplanned pregnancy, using the word options, and not reporting the conversation to the girl’s parents. But before he was canned, I stood in his office explaining that he had to get this band — a Christian band! — to perform a concert at our church.

I don’t know what we paid them, I don’t know how we promoted it, and I’ve got no clue who dealt with production. I can’t imagine what it took to convince the elders, but the band showed up as scheduled and played in the giant sanctuary, right there on the altar in front of the baptismal. There weren’t many people there to see it, just a clump of kids up front and a few parents scattered throughout the first few rows of pews.

The Throes were as good as their album, better even — louder and more outsized. But unfortunately, although the bass player was wearing a paisley blouse and had pretty hair, he was a dude. A different BASSER.

I interviewed the band after the show for my Christian ’zine, and the first question is a bit aggressive:

ME: So, it seems like you’ve replaced some key band members?

The rest of the interview is typical teenage Q&A, likely the same lame questions the band were asked by the youth group zinester at the last church they played. Their replies were acrobatic, walking atop that awful Christians-in-a-band but not a Christian band balance beam. It must have been exhausting.

ME: Does your record label expect spiritual messages in your songs?

SINGER, annoyed: No, no, no. The label doesn’t get any input there. The writing comes out of our very normal lives, which also happen outside of church, you know? We don’t have an agenda. Anything and everything goes into the evolution of a song.

DRUMMER, sarcastically: You mean “Creation” of a song, right?

ME: Well, thank you for your time, and for coming to play. I’m actually the guy who got our church to book you.

SINGER: Oh. Man. Well, maybe next time you could book us in a club?

Adam Voith is a booking agent at WME in Nashville, where he represents a small roster of world-class badasses. Long ago, before the business of music took center stage, Adam ran the mid-brow micro-press TNI Books which released work from writers and artists like Camden Joy, Damien Jurado, and David Shields, along with two of Adam’s own books. Adam has recently returned to his love for writing and published pieces in The Sewanee Review, Hobart, and an issue of the fictional zine “The Christian Humper”. Adam is working on a novel which lives in the Christian Rock world of the 1990s. You can find more on his website: adamvoith.com.

Adam Voith
Christian rock
music essay
personal essay
The Good Booking
The Way We Get By: Delroy Lindo is Finding Hope Through Volunteering, Protesting and the Young Generation
How Do We Get Back to Work During Coronavirus? By Embracing Our Indie Roots 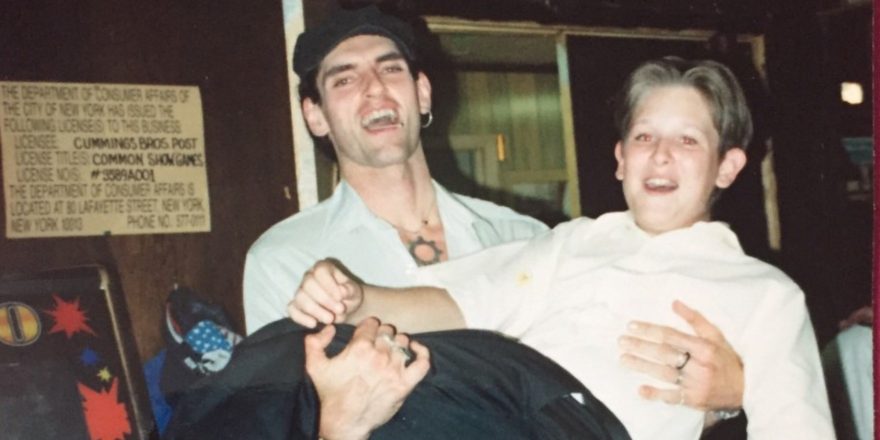 My Cousin The Rock Star