Terrie Samundra is a writer-director who grew up between a rural village in India, a small farming town in Missouri, and along the coast of California; informing her work as a multi-cultural artist. Her debut feature, Kaali Khuhi, is a Netflix Original Film that premiered on the platform on October 30, 2020. She is an alumna of the Sundance Institute’s International Screenwriter’s Lab for her screenplay Betamax, co-written with David Walter Lech, and Kaali Khuhi was invited to the Sundance Women in Film Financing Lab in 2018.

One piece of advice that all filmmakers seem to get is that you should never work with kids or animals. I seem to not only ignore the first part of that warning, but willfully defy it. Stories where children are front and center is a strong theme in my work. In my feature debut, Kaali Khuhi, three of the main characters are young girls between the ages of eight and 10. In a rural village on the border of India and Pakistan, I made a horror film with three young actors, a dark children’s fairytale, set against the gruesome practice of female infanticide.

Two years prior to shooting, my co-writer and I wrote the first draft of the script, a ghost story about a young girl called back to her family’s village in Punjab, India, where she uncovers the dark secrets of her ancestral past. As a child who grew up in rural Punjab myself, ghost stories were part of the village folklore passed down to me. In the evenings, the women in my family sat under the stars in the back of our house surrounded by fields, around the glow of the fire from the chula, an earthen stove. My youngest aunt often told stories about the haunted house next to ours. Although we were little and the elders spoke in hushed tones, us kids memorized every word, weaving them into our own visual landscapes before we were shooed off to bed. Through the years, I started to recognize that some of those ghost stories were veiled truths and began to piece together real people, places, and occurrences. I also started to understand my own familial connection to those tales. I wove the same events into the script for Kaali Khuhi, and I channeled my experiences hearing ghost stories as a young girl into my protagonist, Shivangi.

As I embarked on the film, I knew the biggest challenge and most important task ahead of me would be working with the child actors. Writing the screenplay was one thing, but directing the young actors in a horrific story was something completely different. The way we approached the magnitude of gender violence and the history of female infanticide was through the very ghost stories my aunt and mother told me. Instead of being a passive listener like I was as a child, many times feeling lost and confused, my actors and I actively explored these horrific acts and practices through character, action and story. I was honest, but careful to keep things focused. There was always space for them to ask questions and with that, their curiosity was heightened, as the girls shared what they felt was happening to their characters and what it meant to them. In this way, I was able to take the young actors through the tunnel of a very dark tale, towards the light and onto the other side.

The role of Shivangi, the film’s protagonist, demanded dedication, stamina and a profound understanding of the character’s arc by a young child. When I first met Riva Arora, I had her watch clips from Pan’s Labyrinth with me, and we then discussed the journey of that film’s main character Ofelia, a young girl who witnesses the callous brutality of her stepfather and is tasked with saving her baby brother, against the backdrop of civil unrest. After that first meeting, I sent Riva home with a list of films, stories and books to explore. She was curious and had more questions than answers, exactly the same way I pictured her character.

The most challenging part was the climax of the film, where all of the horrors of the past are revealed to Shivangi, and the final clue is presented as a choice. Taken through a labyrinth of illusion, she witnesses the unfolding murder of her aunt, only a baby at the time. Through the use of genre, where rules can be bent, Shivangi is given a choice to rewrite the wrongs of the past, liberate the ghost and break the curse. Shivangi tells the ghost that she will save her, but Riva understood that her character was telling that to herself and claiming her own life. The act of Shivangi freeing the ghost of her murdered aunt represents the new generation releasing themselves from the chains of patriarchy and harrowing traditions. It was a cathartic scene for Riva and me to execute together.

The role of Chandni, Shivangi’s cousin, was the hardest role for open casting. We auditioned 21 young actors, knowing that the character would go through a huge range of emotion and transformations and casting was key. Over the course of the film, Chandni would take a drastic turn from a timid girl to a wild and out-of-control demon, possessed by a ghost in the last act. Eight-year-old Rose Rathod’s audition was uninhibited and spontaneous, landing her the part.

Prior to shooting the possession scenes, we spent quite a bit of time preparing together. Rose began to understand that when Chandni becomes possessed, it’s not because her character is bad or evil. At that point, Chandni is the vehicle of the ghost, an extension of the ghost’s anger and rage. Rose began to feel empathy and solidarity for the ghost’s pain of being unwanted and having died from being thrown down a well. For some of the wilder, more physical scenes, we came up with cue words which would help Rose shift the character’s emotional state. When we shot the scene where Chandni bites Shivangi, my assistant directors and I stood right out of frame, yelling, “Beast! Beast! Beast!” which was her cue word to go into what we termed “beast mode.” Rose is a well-mannered and polite young girl, and getting permission and even encouragement to channel rage was something she hadn’t experienced before. As we were shooting the scene, the internal shift in her was palpable and I could feel how this was transformative for her.

Originally, Hetvi Bhanushali had auditioned for the role of Chandni, but we asked her to also try out for the role of Sakshi, the ghost. Hetvi’s innate physicality in her acting method made her perfect for the ghost and she nailed the audition. In the beginning, she was nervous about trying things on her own, but I quickly realized she had a natural ability to experiment, which I encouraged. Once she got that green light, she went into what I saw as her own version of Method acting; the ghost never wore shoes and so Hetvi never wore shoes either, whether we were filming or not. Hetvi had to grasp the sheer intensity of her role. Not only does Sakshi scare us throughout the film, she commits horrendous acts, killing her mother and brother, and tormenting everyone in her path as she unravels out of control. How does a child grasp playing a character whose actions defy logic, much less begin to understand their choices? I presented her with questions more than explanations. She understood that the ghost carried an unbearable pain, which fueled her revenge. Hetvi didn’t judge her character, but approached it with questions of why she might do what she was doing. What Hetvi brought to the character was a deep grief, which is distinctly present on screen.

The making of Kaali Khuhi spilled over beautifully into the messiness of life, and eternal bonds were formed. Along with the entire cast and crew, my family and I lived for almost two months in a Marriott. My daughter Yamuna became close friends with all of the other girls, and also made an appearance in the final scene of the film. On days off, they played and swam together, befriended the staff and explored every nook and cranny of the expansive hotel.

Witnessing their work through discovery and play, and their resilience, was one of the most profound and extraordinary experiences as a director. I tried to ask and explore questions that have haunted me since my childhood. In post-production, watching the footage, memories of my own childhood flooded over me. I was existing in some space between reality and memory.

The characters in Kaali Khuhi and the young actors who played them were all going through the fragile and bittersweet moment right at the cusp of childhood when the world begins to demand things of you, pulling at the cloak of your innocence. We wove all of this into the film. Although the film is my exploration of what it would be like to find liberation in the shadow of a horrific past and my own healing of generational trauma, my hope has always been that the experience of making the film also planted a seed of agency for the young actors I worked with.

Featured image shows Hetvi Bhanushali (Sakshi, the ghost), Rose Rathod (Chandni) and Yamuna Samundra at the Amritsar Marriott, where they lived during the production of Kaali Khuhi.

Terrie Samundra is a writer-director who grew up between a rural village in India, a small farming town in Missouri, and along the coast of California; informing her work as a multi-cultural artist. Her debut feature, Kaali Khuhi, is a Netflix Original Film that premiered on the platform on October 30, 2020. She is an alumna of the Sundance Institute’s International Screenwriter’s Lab for her screenplay Betamax, co-written with David Walter Lech, and Kaali Khuhi was invited to the Sundance Women in Film Financing Lab in 2018. 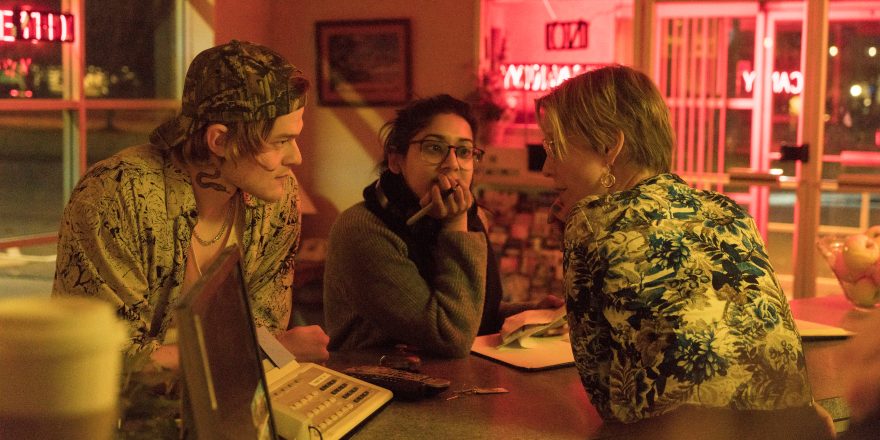